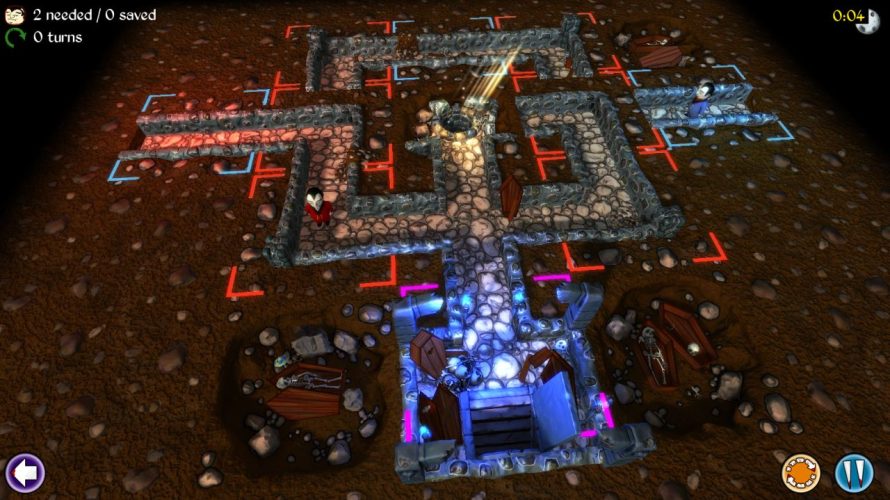 It’s as if everything has been turned upside down in Vampires! because I certainly don’t recall the last time a vampire needed the aid of a mere mortal. That is, however, the case here, as you are tasked with helping them reach their crypts safely unless of course, you desire a greeting by the infamous “level failed” screen.

Guiding them guys to their crypts is a simple matter at first, as the tile-based level design offer little challenge early on, but as you progress through each of the 16 levels found in this demo, the difficulty definitely increases and soon you’ll miss those early, simple levels where victory was but a few tile rotations away. Any sane vampire would know stop instead of walking straight into a wall and turning right around, but that’s not the case here as these guys just keep moving back and forth, like a bunch of vampire lemmings, which certainly doesn’t make your job any easier!

To make matters even more complicated, only highlighted tiles in each level can be turned to create those new (and hopefully safer) paths, but at least you can do it while a vampire is crossing it. For the most part, turning tiles is what you’ll be doing in each level, but there is more to it than simply saving a certain number of vampires to move onto the next stage: A silver or gold medal is awarded for careful planning, since going for the gold means you to only get to turn so many tiles while making sure you don’t take too long and save a predetermined number of vampires.. wow, good luck to completionists.

Now, you’d think all vampires behaved more or less the same in a game like this (ie. like lemmings), right? Wrong: Early on, you’ll be introduced to red ones turn that left at a crossroad and blue ones that turn right, so you can imagine the chaos that’s bound to happen while trying to guide both safely to that oh-so-wonderful crypt; plus, later on the game will throw four more vampire types with their own unique behaviour at you – get ready to do yourself for some careful planning with those guys walking around.

Thankfully there’s more to aid you in your task than simple tile rotation, because honestly, that would get quite repetitive, considering the full game will feature a whoopin’ 65 levels: Garlic can be placed on a path to create a roadblock, which causes any vampire to turn around immediately upon contact and cobwebs will reduce movement speed, giving you those vital extra few seconds to react. Believe me when I tell you that you are going to need any help you can get, because sunlight is only one of many threats, including mobile wooden stakes and vampire hunters; ain’t easy being a fanged creature of the night..

If you feel like helping Dracula and his kin get to their crypts, the 16 level demo can be acquired from here (PC/Mac), and there’s even a web-based version. CBE software is also trying to get their little vampiric puzzler onto Steam by way of Greenlight (here), so be sure to hit them with some feedback there.