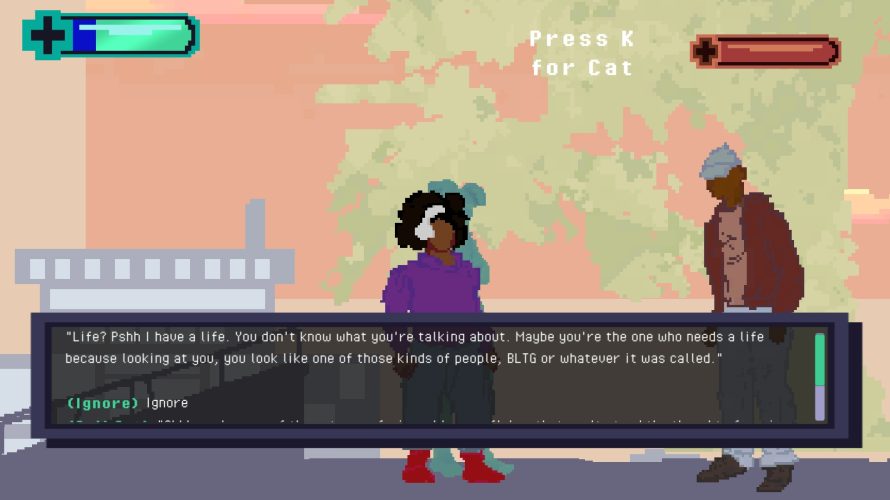 In a perfect world, women are able to walk from a to b without being harassed by strangers, forced to deal with frustrations like catcalling and misogyny. In reality, however, they are quite the issue, and in Don’t Walk Alone where Aurora just wants to get to Oakley Community College, maybe even enjoy the short walk, it’s… almost worse. What’s a lone girl to do upon encountering street harassment, then? Fight fire with fire! Slap the jerks verbally and smirk as wits demolish their bloated ego.

Immediately upon stepping into the shoes of Aurora, we’re treated to a brief exchange with her sister with a reminder of just how dangerous the world can be, and how it’s better to attempt to outsmart someone than to get into a fight. I could not agree more, as the moment you lay hands on someone, all bets are off and someone is going to get more than, you know, a bruised ego. Communication, on the other hand, can be an equally useful means of disarming a combatant (or in this case, a harasser) – especially since most who resort to such behavior aren’t exactly the brightest lot.

As such, they’re almost guaranteed to crumble after losing a battle of wits, which is a good thing seeing how Aurora’s only options upon being stopped by an annoying stranger are to ‘ignore’, ‘callback’, and get ‘aggressive’. So to see how the same encounters played out had I made different choices, I played through Don’t Walk Alone multiple times, and honestly, ‘aggressive’ never seemed overly useful since the other person would simply respond in kind, the situation not really progressing. Which makes sense, as then you’ve simply stooped to their level, and what’s the point in that?

All in all, it’s a really nice, short experience. One that at first might seem like a less-than-enjoyable reminder of the fact that jerks with nothing better to do than harass women on the street exist… until you flip the script and Aurora outwits said jerks without breaking a sweat, turning it into a gratifying tale about how easily words can disarm harassers. That said, when constantly forced to stop and deal with dim-witted strangers, will our protagonist actually be able to get to her destination on time? Will she? Yes? No? Just remember, Don’t Walk Alone.

Don’t Walk Alone is available for free on itch.io.