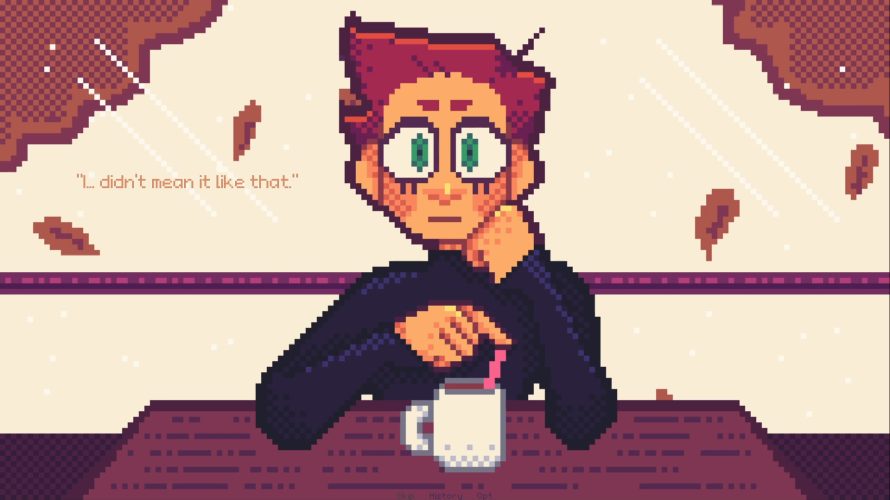 Visual novels can take on many forms, and while a lot dabble in dating, they mostly do it in the form of a dating sim – a puzzle of sorts with multiple potential candidates for the player to woo. Even though Autumn Fall is also a visual novel that revolves around dating, it does things a bit differently, the player stepping into the shoes of a guy meeting his girlfriend at a café for a chat. That’s how it begins. How it ends… is up to you.

It’s cold outside. The protagonist really didn’t want to venture out into that kind of weather, but does it make him grumpy or is he fine with it since it means he gets to hang out with a cute girl? See, that’s entirely your call as a slew of choices determine how this little date ends. Now, while Autumn Fall does have three endings, I was only able to uncover two during my time spent with it prior to writing this article. That initial playthrough was definitely more interesting than the rest, as I never knew how she’d respond to certain dialogue choices. After I got my first ending, however, it became more of a curiosity, an experiment if you will. To uncover information. To get to know her. To find out why… wait, that would be quite the spoiler.

Autumn Fall is a short game where you sit down at a café with your cute girlfriend. She told you she has something important to tell you… what could it be?

As it turns out, there’s quite a bit of backstory to both of these characters – albeit noticeably more to her than him, unsurprisingly – and once all’s said and done, I couldn’t help but wonder if my personal feelings got in the way of stringing together the choices that would lead to the third ending, as it eludes me to this day. Well, even so, that didn’t detract too much from the experience, one which was filled with lovely pixel art and an overall chill atmosphere as the date progressed – one way or another. Who needs winter when you can have Autumn Fall?

Autumn Fall is available on itch.io, for free.

Facebook Twitter LinkedIn Pinterest Tumblr WhatsApp Telegram E-mail
Previous article 'AdventureJam 2021' is Almost Upon Us! No Themes, Lots of Voting
Next article Embark on a Trippy Twin-Stick Shooting 'Journey To Moonray' This Fall