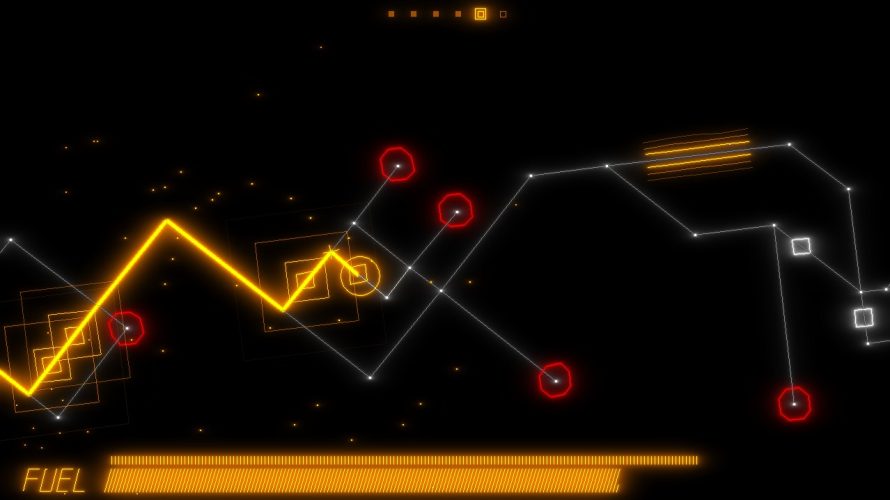 Retro-styled indie games are a dime a dozen these days, with their fancy 8-bit visuals, brutal difficulty, and whatnot. While Trace Vector is also clearly inspired by games of yesteryear, it goes further back than most, in that it actually uses vector graphics (hence the name). You remember those, right? Lunar Lander? Tempest? No? Anyway… time to race through 2D obstacle courses like it’s 1981 all over again!

Don’t let the graphics fool ya: Trace Vector may look simple, but believe me, it’s definitely one of ‘those’ games, by which I mean that it’s got no problem kicking your ass, while at the same time, making you want to come back for more. Yup. Helps that it’s a ton of fun, obviously, as well as a clear-cut case of ‘easy to learn, hard to master’.

The object in each level is to reach the exit, which is pretty easy… in theory. In reality, however, it’s more than simply a matter of getting from A to B, as you’ll have to navigate crazy mazes filled with twists and turns, while avoiding dead ends, grabbing fuel pickups and so much more. Oh, did I mention fuel is the equivalent of your health, or that failing a level doesn’t grant you a resupply? Indeed.

Other neat stuff like portals and speed boosters (some of which are optional) are also part of the equation, because… the game obviously wasn’t difficult enough without them, right? Well, yes and no. Once you get into a groove, I’d say that the experience almost turns into a rhythm game of sorts, and this is where the fun begins.

See, when things really get going, you’ll rapidly be tapping either up or down, making split-second decisions to stay on the optimal path, that beautiful green exit almost within reach, and then… you crash. I did anyway, and more often than I like to admit. Suffice to say, it may be one of ‘those’ games, but there’s still lots of fun to be had. Besides, practice makes perfect, ya know?

Trace Vector is available from Desura for Windows, priced at $10. The soundtrack can be acquired from Bandcamp for $6. Want the game on Steam? Help get it greenlit then!

Note: at the time of writing, Trace Vector is part of the Build A Greenlight 5 bundle for another 72 hours.