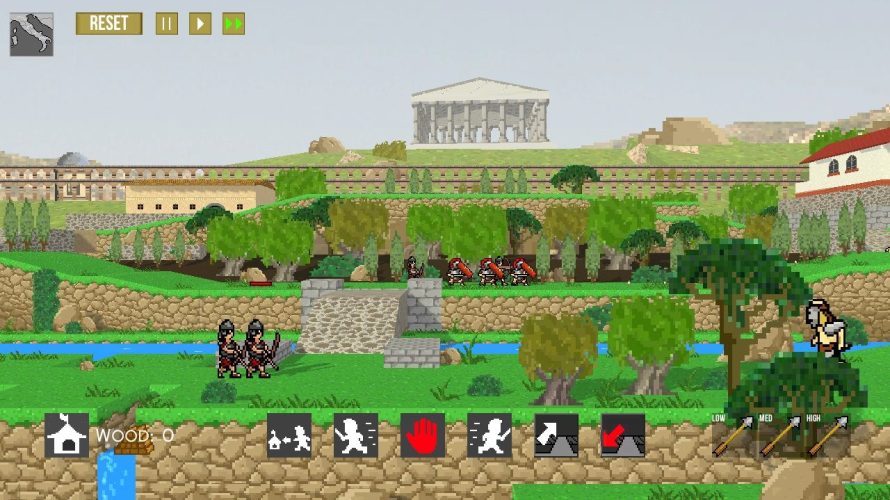 This time the spotlight will be shining on Super Roman Conquest, a 2.5D strategic tale of The Roman Empire, complete with bandits and… probably a few barbarians too. Let’s see if we can’t help it escape the cold emptiness of Greenlight limbo, eh?

Super Roman Conquest is a side-scrolling strategy game that gives you full control of your troops within a multi-layered, 3D landscape. Developed by veterans of LucasArts, SRC blends our formative PC-gaming past with modern RTS design elements and a deep Campaign Mode progression.

About time some attempted this, I’d say. Not that I’ve grown weary of Total War and other medieval-ish strategy titles, mind you, but just the perspective alone – such a breath of fresh air, and given the wide unit variety… quite the potential for chaotic battles. That said, given the inclusion of a real-time mode for ass-kicking, along with a more relaxed ‘planning’ phase, during which your troops can be upgraded, fallen soldiers replaced by new recruits and such, I do have but one concern: the AI. Far as I can tell, after all, Super Roman Conquest won’t feature any kind of multiplayer, so a lot is resting on the AI – and story, for that matter – being up to snuff. Although aside from that, the game is certainly overflowing with coolness, and hopefully we’ll soon be able to find out if glory can be restored to The Roman Empire. In video game form that is. No one wants to actually relive that part of history.

So riddle me this, dear reader: why is Super Roman Conquest still struggling to get through Greenlight? It’s not out just yet, but should be at some point this summer! As such, might I recommend visiting its Greenlight page and handing over a ‘yes’, if you like what you see? Remember, your vote matters!