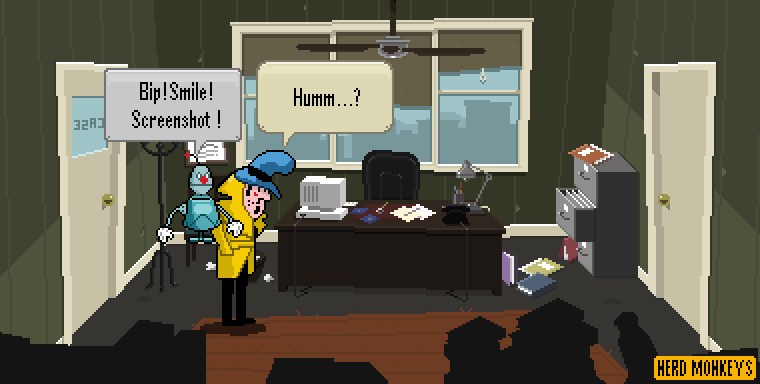 This time the spotlight will be shining on Murder in the Hotel Lisbon, an old-school point ‘n’ click adventure turned nonsensical murder mystery. Let’s see if we can’t help it escape the cold emptiness of Greenlight limbo, eh?

A strange murder has occurred in the Hotel Lisbon, a man committed suicide with 14 stabs to the back while at the same time he peacefully drank his coffee. This case with contradictory facts was too complex for Policeman Garcia to solve, so he decided to hire the only detective duo in town capable of solving it: the mythical Detective Case and the unmistakable Clown Bot.

Man, how’s that for an uncanny duo? I’ve often said that game characters won’t get anything done without the player, but in this case… yeah. I mean, just look at these two, eh? It’s a good thing that this tale is of the less-than-serious sort then, as otherwise, one might actually be tempted to root for the bad guys. Anyway, uncanny duo or not, the two will have to conduct interviews and/or interrogations, chase bad guys, investigate clues and, you know, detective things. If only Case didn’t have such a nasty temper, although that might actually be advantageous when grilling crooks for information. What’s the worst that could happen, after all? Well, apart from them pissing off the wrong people of course! Something something cement shoes and a murder mystery forever unsolved.

So riddle me this, dear reader: why is Murder in the Hotel Lisbon still struggling to get through Greenlight? It’s been out for a while (since December 2013), so availability certainly can’t be the reason. Might I recommend visiting its Greenlight page and handing over a ‘yes’, if you like what you see? Remember, your vote matters!

Murder in the Hotel Lisbon is available for Windows, Mac, and Linux from the official website and Desura, priced at $9.99 and without DRM.