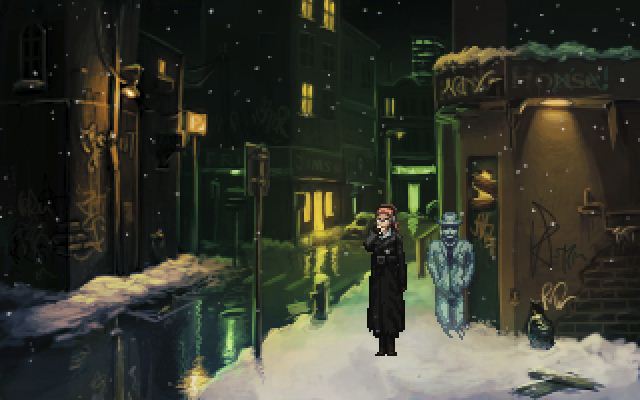 Being a medium ain’t easy at the best of times, as proven by Rosa Blackwell on several occasions. Aided by Joey Mallone, she’s braved Hell and high waters to help countless lost spirits move on. It’s pretty much become a way of life for this uncanny duo, although this time, the rules have changed as one after another, newly born spirits are torn apart! Who, or what could be behind such a sinister act?

The release of Blackwell Epiphany is both a reason for fans to celebrate, but chances are it’ll make some shed a tear or two. Having played through the entire thing, I can safely say that by the time those nifty credits roll, every question will have been answered. That’s it for good news. The bad? Well, as I’m sure you’re aware… this is the final chapter. Yup.

Wadjet Eye Games did manage to end the series on a high note though, sending players on an emotional rollercoaster ride with more than a few twists and turns. It may start out as ‘just another day on the job’ for our protagonists, but once things get going, the game doesn’t slow down until after everything’s said and done. There’s always something to do, someone to talk to or a scene to investigate. Come to think of it, I’d love to know what Rosa’s shoes are made of because man are those things ever durable! 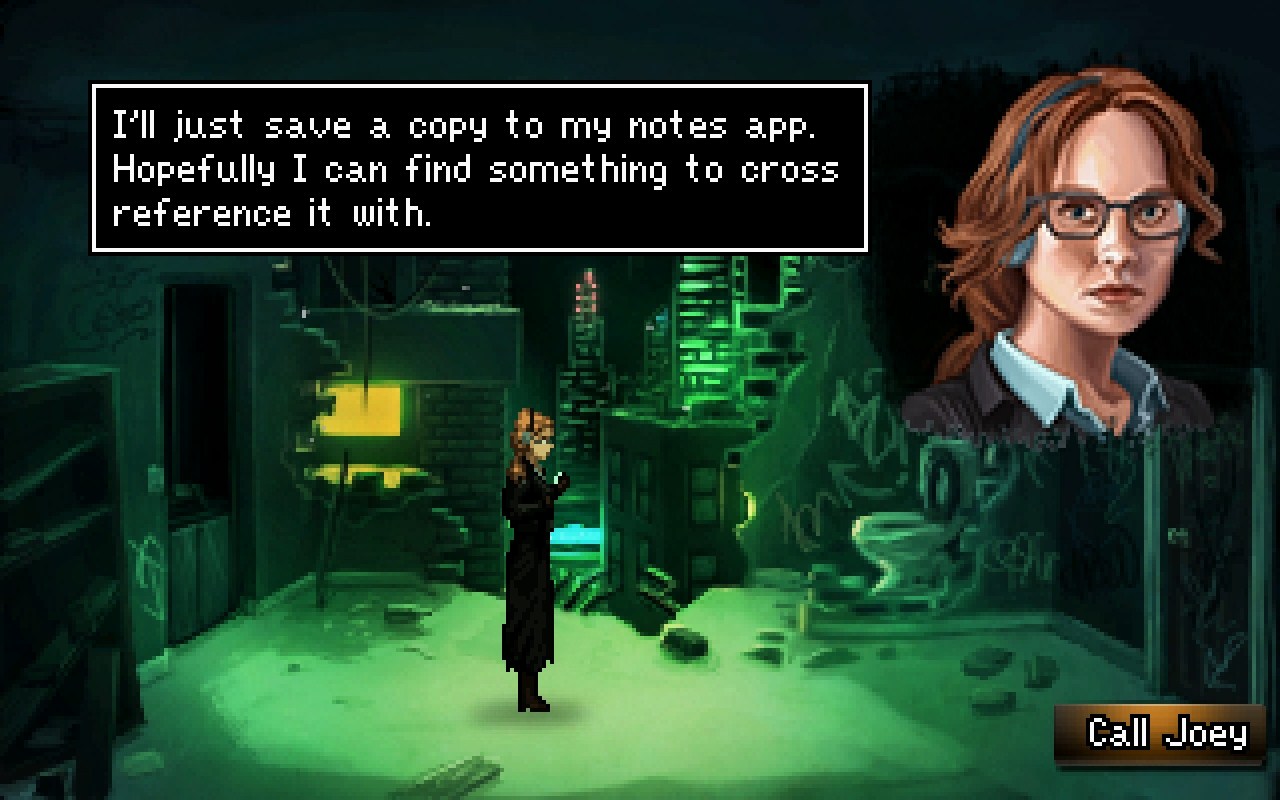 In terms of gameplay mechanics, little has changed since Deception. Switching between Joey and Rosa is simple and easy, each with their own purpose. Joey, for instance, being a spirit and all can move through solid objects, on top of being invisible to most people. Rosa, on the other hand, has a brand new smartphone on which notes, addresses, and phone numbers are automatically stored for future reference. As far as who’s the brains of the operation goes, I’d say they’re about evenly matched… for the most part.

Anyway, in terms of puzzles, Epiphany, like the other four Blackwell games, is a bit of a lightweight. Well, unless detective work counts of course because there’s plenty of that! You’ll be questioning people, spying on them, cross-referencing information, researching clues online – all that good stuff. That’s not to say the game is entirely void of classic inventory manipulation though, although that stuff is fortunately kept to an absolute minimum. None of that ‘combine x and y to make z, followed by z and b to make c’ craziness.

Putting the metaphorical pieces together isn’t overly challenging either, and each new clue is often directly related to the current task, making it all that much easier. Should you find yourself lost, however, just poke Rosa or Joey for a quick chat, as either will gladly drop a hint or two, allowing you to be on your way in no time.

Not that I’d recommend blazing through the story though, as you’ll miss more than a bit of interesting dialogue if you do; and with this level of voice acting, that’d certainly be a shame. See, while you don’t have to grill everyone until every option has been exhausted, more often than not, the extra time spent is worth it. This alternate version of New York is full of fun facts and strange locations/people, so since you’re here anyway, why not make the most of it? Just don’t forget about the spirits.

Seeing how big a role immersion plays in a thriller like this, it’s fortunate that the entire thing is both voiced on a professional level, and packs great looking pixel art. Say what you want about pixellated visuals, but as far as point ‘n’ click adventures go, there’s no better choice in my book – as long as the artist knows what he/she is doing, of course. And don’t even get me started on the importance of voice acting in a genre like this, where the plot is (or at least, should be) prioritized above all else.

A dead man’s soul cries out against the force of a ferocious blizzard. He cries for help. He cries for answers. Then he screams as he is torn apart like damp tissue paper. This wasn’t the first time, and it won’t be the last.

Speaking of which, where Legacy, Unbound, Convergence, and Deception (to be played in that order before Epiphany, by the way), mostly stayed in the present, Epiphany features… flashbacks! While I usually find this type of thing annoying in TV shows and movies, it’s the complete opposite in Epiphany, as it actually helps flesh out the background story of certain key characters, if only slightly. That and the whole thing is done with as little confusion as possible. 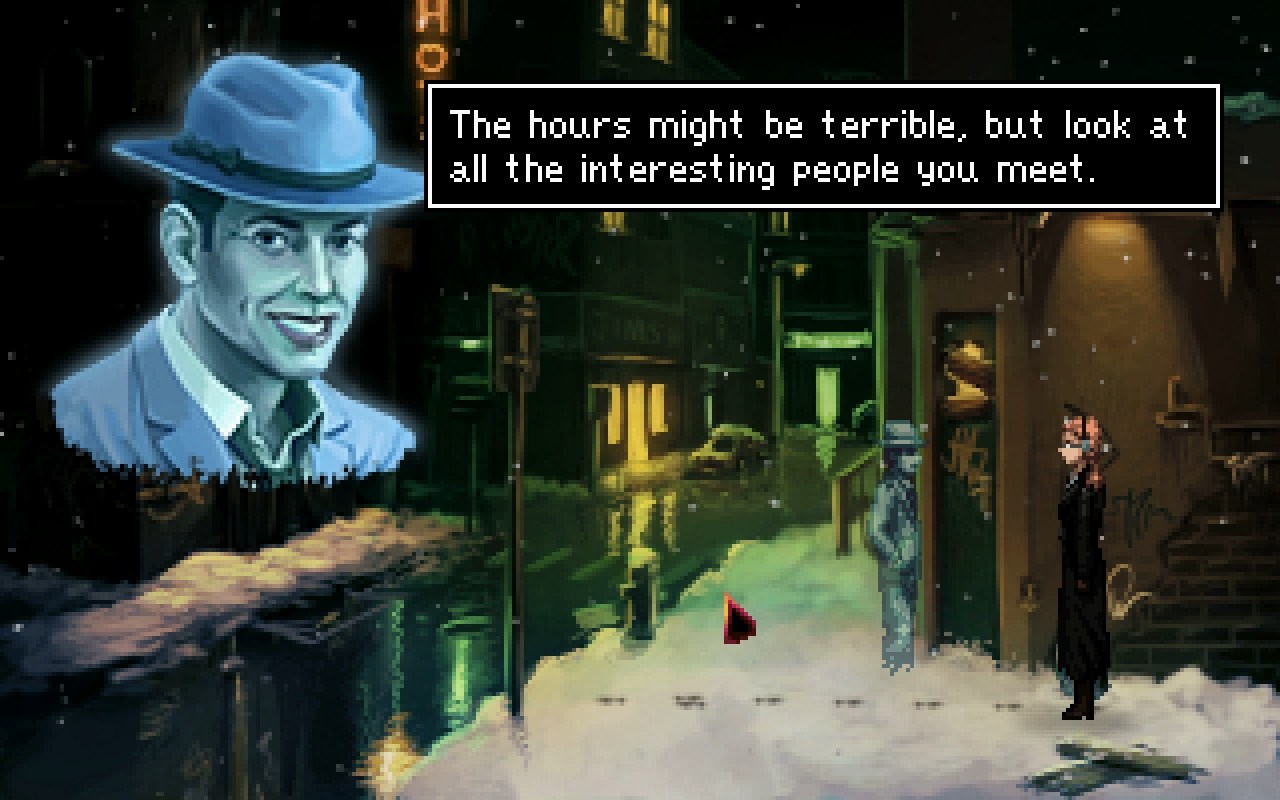 Between the past and present, there’s plenty to do in this grand Blackwell finale, which will likely last a good 6-7 hours, leaving you with plenty of food for thought. Even more so, since it’s noticeably darker in terms of content than most other genre entries; something you’ll discover soon after the first mystery has presented itself. That said, Joey’s sarcastic remarks should help lighten the mood, during even the direst of times.

Now, normally this is where I’d highlight issues, flaws, and other problems, and balance them against the positives. But in the case of Epiphany, I dare say… it’s all good! It’s a finale that’s not only entertaining but also wraps up storylines in a satisfying and timely manner. In fact, why are you still reading this, when Rosa and Joey are waiting in Blackwell Epiphany (just be sure to play its precursors first, as listed below)?

Blackwell Epiphany, along with Legacy (#1), Unbound (#2), Convergence (#3) and Deception (#4), can all be acquired from the Wadjet Eye Games website, Steam, and GOG.com.