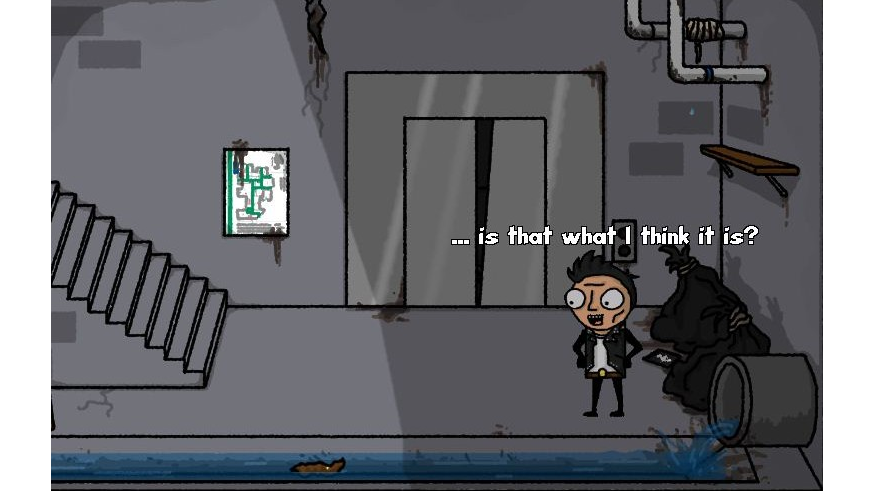 This time the spotlight will be shining on Metal Dead, a comical pointy and clicky adventure with zombies and metal! Because… why shouldn’t the two be mixed? Let’s see if we can’t help it escape the cold emptiness of Greenlight limbo.

This twisted tale centers on two metal-heads in the midst of a zombie invasion. After crashing their car in front of a medical research facility, they become trapped and are forced to use their wits to puzzle their way to freedom. Along the way, they must deal with a cast of characters who range from mildly deranged to completely insane.

Yup, zombies. What better way to spice up a game like this than to have everyone’s favorite undead join the supporting cast? I certainly can’t think of any, and with an average Joe as the protagonist, this has b-grade horror movie written all over it. Nothing wrong with that though! From what I’ve experienced, it’s a hilarious adventure in which you’ll have to deal with not only rotting corpses but also some seriously messed up characters; the undead apocalypse is known to have that effect on people. It’s also a bit gory, but what did you expect, given the source material? Braaaaains!

So riddle me this, dear reader: why is Metal Dead still struggling to get through Greenlight? It’s been out for a while (since December 2011), so lack of availability is certainly not the reason. If you haven’t done so already, might I recommend visiting its Greenlight page and handing over a ‘yes’, if you like what you see? Remember, your vote matters!

Metal Dead is available for Windows from a wealth of places, all of which are listed on the official website, priced at $5 / €3.50 / £3 and without any DRM.