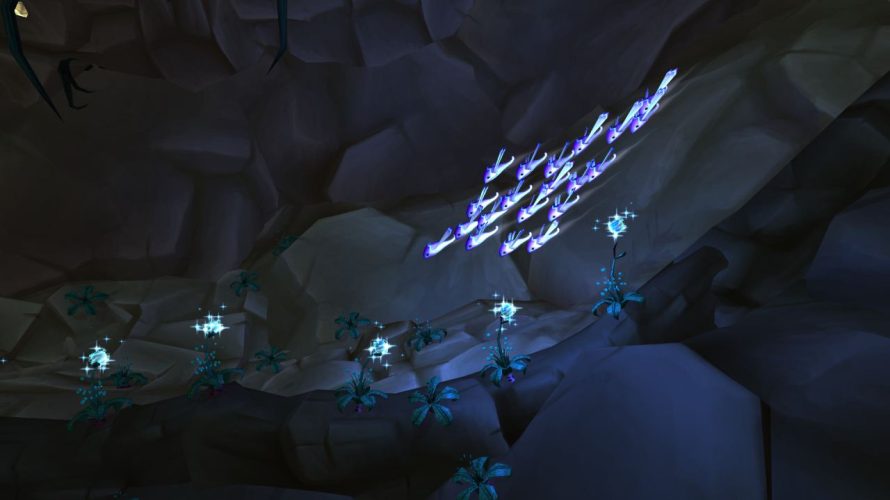 Being forced to share a planet with hostile creatures can be quite hazardous, which is why the Lumini have decided to leave it behind and search for a new world. A safe haven as it were, far away from the dangers of their current home.

Is ‘swarm flowing’ a genre? Probably not. That’s how I’d define this game though, as it tasks you with guiding (flowing) a swarm of Lumini to safety while avoiding all kinds of nasties. As you go along, some will die. It’s inevitable. Fret not, however, for at specific locations, new Lumini can be bred! You’ll still feel the guilt from having gotten a number of them killed, but since you are on a quest to ensure the survival of an entire race… the needs of the many, you know?

It’s not always about casually going with the flow either, as there’s plenty of room for exploration and discoveries. But do be careful, because as I mentioned earlier, this place is anything but safe, and the many predators lurking along your path would love to turn your little swarm into a happy meal! What? No one said migrating the Lumini was going to be easy. In fact, you’ll have to play it smart – splitting the team from time to time – for a shot at getting the poor things to safety.

Can you bring the Lumini to safety and make them a flourishing species once again?

Well, can you? Oh right, the game isn’t out yet! My bad. I’m sure Speelbaars are hard at work on Lumini as you read this, though. If you promise to check out the trailer below, I promise to share more details as soon as I have something – deal? Great!