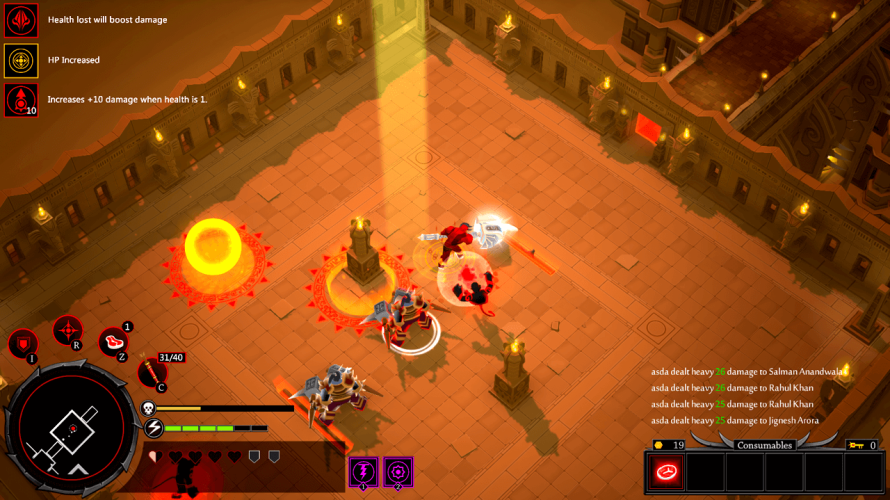 This time the spotlight will be shining on Asura, a hacky-and-slashy experience that has you playing the part of a demon, because why not? So let’s help it ‘escape’ Greenlight limbo!

Asura is a Hack ‘n’ Slash game with rogue-like elements and procedurally generated skill tree. Loosely inspired from Indian mythos, play as Asura, the demon incarnate and obliterate your way through the randomly generated fortress of the Daeva empire. Equip weapons from a wide variety of arsenal and carefully craft your character using the ever changing skill tree. The game can be brutal but is always fair. Can you rise from the ashes? Can you defeat the Daeva empire?

Alright, so demon incarnate. Same difference. You’re a demon, and apparently, one hell-bent on destruction (then again, when aren’t they?) with plenty of tools to get the job done. Probably gonna need it though, going up against an entire empire and all. Also, a procedurally generated skill tree? Wait, what? That’s either going to be awesome, terrifying, borderline unfair, or a mix of all of the above. Time will tell. Bound to make for an interesting demonic affair in any case, and at the end of the day, isn’t that what matters most? I mean, sure, reliable power does help, but we could all do with some uncertainty every now and then…

As such, riddle me this, dear reader: why do YOU think Asura still hasn’t made it through Greenlight? The game ain’t out yet, but even so -- how about visiting its Greenlight page and handing over a ‘yes’ if you like what you see? Remember: your vote could make all the difference!

Facebook Twitter LinkedIn Pinterest Tumblr WhatsApp Telegram E-mail
Previous article 'Bear With Me' - Amber's Brother Is Missing, But Fear Not For Her Teddy Is... a Detective?
Next article Hack the System: 'Quadrilateral Cowboy' Source Code Released