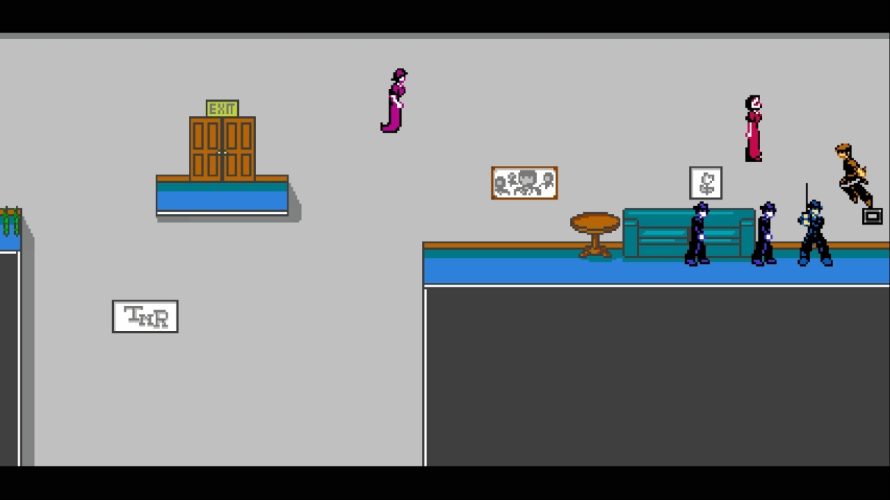 Actions speak louder than words. A phrase almost older than time itself, and one that certainly rings true for Shin Samurai Jazz. I mean, the game is 40% action, 50% platforming, and 10% story/dialogue. Just like in the good old days! Who needs a bunch of chatty NPC’s anyway, when you’re able to (almost) fly like an eagle, slicing bad guys left and right with crazy air juggles? Exactly.

That’s not to say it’s completely void of plot though, as based on my brief time with the demo, I’d say this particular town is bloody cursed. Regular thugs? Not a problem. Demons that spew fireballs? Complication. Both at the same time, with a huge fella thrown in for good measure? Oh crap. Hope you know how to use that fancy sword of yours, because it’s the only thing keeping you safe from, well, you know… the bony dude with a scythe. Well, that and infinite continues.

It combines the likes of film noir and samurai cinema, presenting them with 8-bit graphics, an electro-jazz soundtrack, and a comic/manga-like style creating a unique atmosphere.

Dying won’t set you back by much, but having to repeat a lengthy platforming sequence can still be annoying. Happened to me quite often. After bouncing over spiked floors, kicking ass and taking names, something or someone usually got me, right before I reached the exit. At least the levels (or rooms, rather) are designed so you’ll rarely be left wondering where to go next. Dealing with enemies that appear out of nowhere… now that’s another matter entirely.

See, while the game features combat that is both fast-paced and satisfying (again, based on the demo), it’s not perfect. Getting bounced back and forth between enemies like a pinball was a much too common occurrence and one which often resulted in my untimely demise, after a series of tricky jumps. Not once did I feel like throwing in the towel though, frustrating deaths and all, so there’s that at least. Oh and use a 360 controller. Trust me.

Shin Samurai Jazz is available for Windows from the official website, Desura and IndieGameStand, priced at $3 and without any DRM. Steam? Not until it gets greenlit, so get to voting!