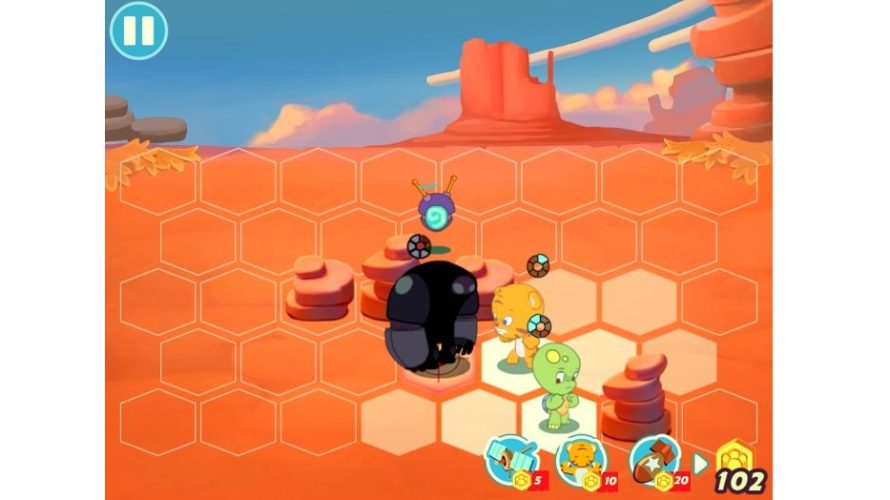 Alien robots have decided to travel through time in an attempt to make off with monuments like The Great Wall and The Eiffel Tower. Whether or not they succeed, is up to PAWS. Can these jerks be stopped, or will our timeless creations disappear forever? It’s animals against robots in the cutest and least violent bout in the history of planet Earth!

Most turn-based strategic affairs tend to prioritize depth and complex gameplay. But PAWS? Easily the exact opposite. While there is room for advanced tactics, the streamlined nature of this game makes each level play more like a puzzle, than an actual battle. This shift in focus is further emphasized by an almost complete lack of progression. There’s no way to upgrade/modify your units between fights, and the in-game currency is only used to launch one of three special weapons. I’m not thereby saying it’s a bad game, because based on the demo I played, there’s definitely potential for fun.

As its creator mentions several times on the Kickstarter page, this is a casual game, which means it probably won’t appeal to strategy aficionados, and that’s fine. They have Heroes of Might & Magic, Master of Orion and such complex titles, so why shouldn’t less experienced genre fans have something as well? Besides, when was the last time you got to pit bears, turtles, tigers, and squirrels against robots? Exactly.

Use the unique abilities of Spiffy the Tiger, Dusty the Bear, Tycho the Tortoise and Bobi Sue the Squirrel to conquer the invading alien horde, in glorious, fast-paced and fuzzy hex-based battles.

Spiffy’s a ferocious melee combatant, Dusty’s a medic, Bobi Sue’s a ranged warrior and Tycho? This guy has an awesome area attack! While the robots do have a similar lineup, their design is noticeably less cute. This does kinda make sense. They’re an invading force after all, so it’d be silly if their appearance wasn’t even slightly sinister! Also, while the fighting can get fierce, no blood is shed, even if/when a combatant falls.

Speaking of, while there is a unit with the ability to heal, you won’t be micro-managing health, damage capability and such. Instead, it’s all about Strength Number (SN), which is used to determine everything. How far you can move, the amount of damage you’re able to take before it’s lights out, etc.; same goes for the robots. This means that if your SN is 4, you can move 3 tiles and deal 1 point of damage, move 2 tiles and take 2 points of damage or… well, you get the idea.

Finances willing, you could always use a special weapon to turn the tide. WWII bombers, lightning strikes and blasting an enemy from space are certainly helpful, but each use does cost Astrocredits. Fortunately, there are several ways to acquire more of these in-game: finish a stage with 3 stars, grab the alien pod; sometimes Astrocredits will just be lying around, ripe for the taking. I wouldn’t count on replaying the same stages to accumulate wealth once you’ve found a tactic that works though, as each battlefield is randomly generated.

Since you’re still here, it’s time for some bad news: chances are PAWS isn’t going to happen, should its Kickstarter fail. At the time of writing, the numbers read $1,107 of $30,000 with 22 days to go, so while they’re not exactly short on time, there’s still ways to go on the financial front. Pledging $10 will get you an ad-free version of the game while going as high as $35 gets ya early beta access! Or how about the $200 tier? There’s a 5cm Spiffy the Tigress figurine in it for ya – bet it looks… spiffy (had to do it).

On the topic of platform availability, PAWS will be free (with ads) on iOS and Android, but you’ll have to fork over some dough for the Windows and Mac versions. Since the release window is officially ‘May 2014’, one thing is certain: aliens are terrible at keeping their invasion plans hidden!