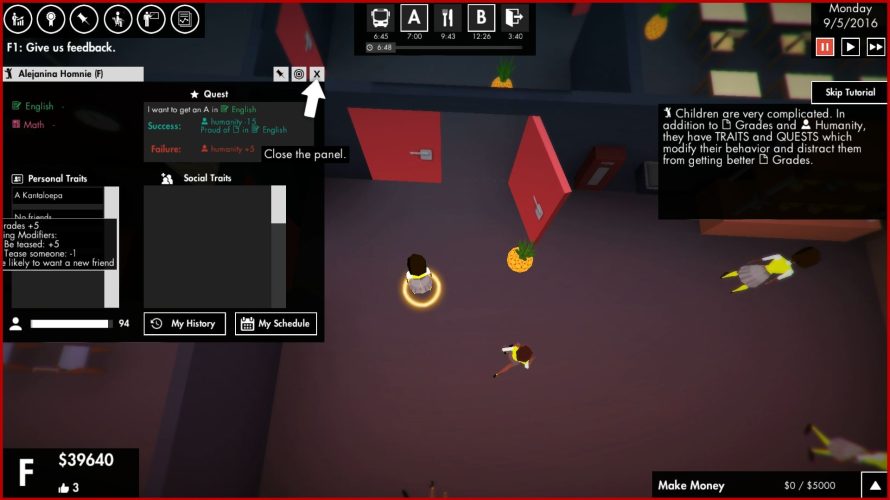 Children (as in, humans) are complex, loud and much too easily distracted, all of which are not good for this school’s budget. Pineapples, on the other hand, are simple, determined and study hard. Because of this, pineapples are beneficial to the school, while children… well, they’re a hassle. As such, your job in No Pineapple Left Behind is to ensure good grades across the board by any means necessary – even if it means turning children into pineapples (wait, what?).

Compared to our world, this one’s definitely a handful, as far as being a principal goes. While there is the usual stuff like hiring (and firing) teachers, managing their workload, educating each to improve efficiency and such, they do also have to deal with the fine balance of pineapple vs humanity. Or rather, fling as many spells as possible during class to avoid pineapples turning into children because that would be bad for the budget.

Confused? It’s actually pretty simple: pineapples get good grades (+budget) – children don’t (-budget) since the latter has other things on their minds; making friends, asking someone out and other useless ‘quests’. Useless to the school anyway, and that is what’s important here! Priorities and all that.

Now, as soon as class starts, teachers will automatically cast a spell on the entire class, upping its overall grade (if successful). This is good and simple, but there’s more to each session in this particular school, in that you also have the option of directly manipulating one or more students – again, by way of magic. The latter is useful in e.g. removing a personality trait, ending a quest or something else entirely, decreasing his/her humanity if successful, and vice versa.

You can’t simply go nuts, enchanting everyone at all times, though, as teachers have energy meters, each spell needing a specific amount to cast. They do regain some overnight, but I have yet to find a way to rapidly replenish said meter. Maybe they’ll be able to take a day off in the full version, or perhaps a higher salary helps? Whatever the case, in my experience at least, ‘active’ magics had quite limited use, due to being rather taxing, although that could also be a lack of skill on my end. Hard to say, alpha being alpha and all. 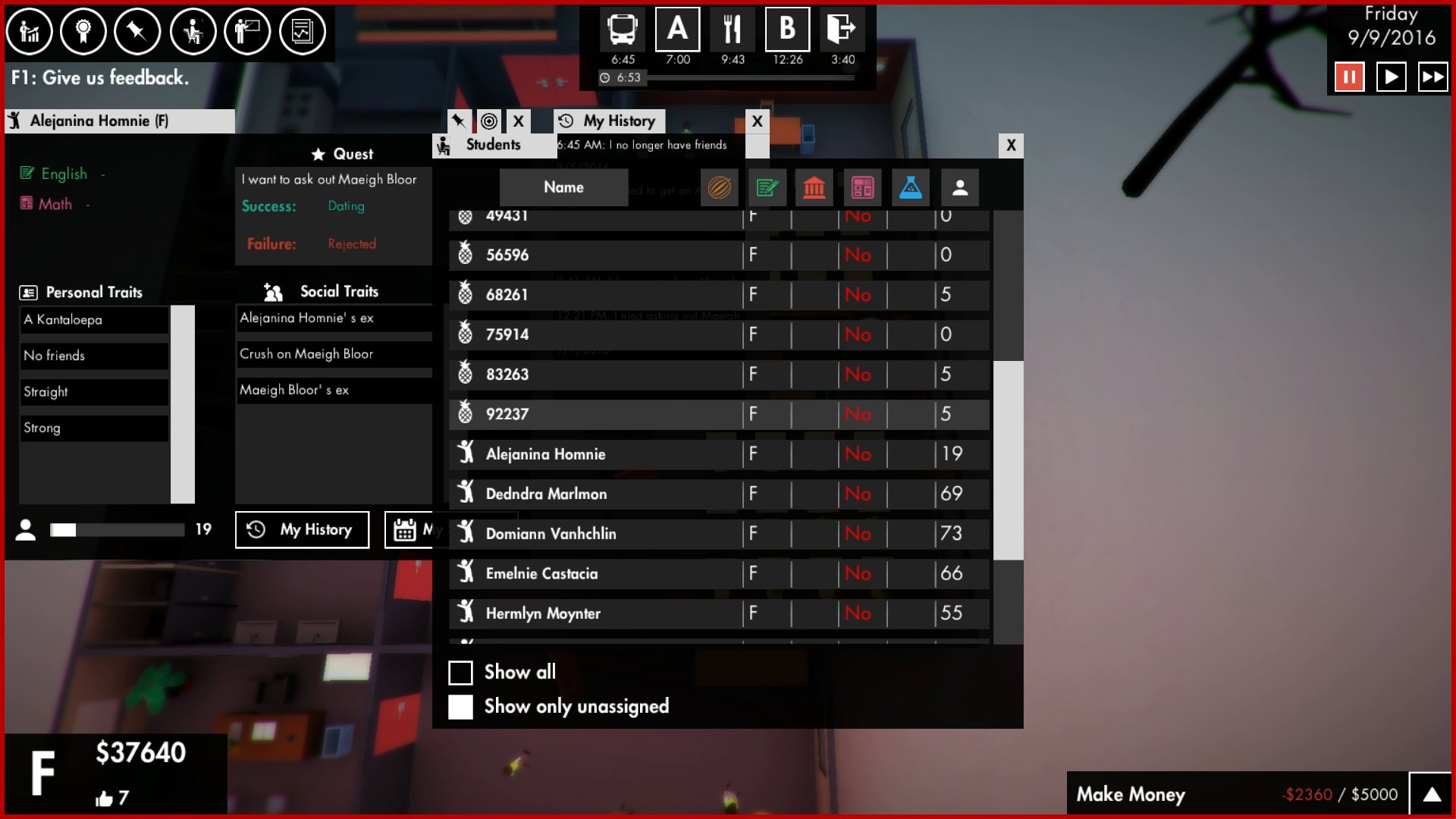 As far as information management goes, the UI is perfectly functional, with panels for everything from the teacher and student lists to those for spell acquisitions and of course, the budget, all easily accessible. You also have the option of pausing or accelerating time, the latter being useful in-between classes, unless you’re extremely patient as reading the ‘thoughts’ of children isn’t overly exciting for extended periods.

In closing, alpha being alpha (in case ya need a reminder), the No Pineapple Left Behind build I played is in fact very much incomplete, meaning there are likely both bugs and missing assets. On top of that, while it is a public alpha, carrying a PWYW price tag to boot, purchasing it will not provide you with a full build, featuring a total of nine schools to play through (alpha is limited to two), come launch.

That said, a pre-order is available, priced at $10, which will get you a DRM-free copy of the game (Windows, OS X, Linux), a Steam key, and the soundtrack. I’d recommend checking out the alpha first though, as well as the trailer (below), simply because it’s likely the closest thing to a demo we’re gonna get.

So, who’s ready to ruin children’s hopes and dreams by turning them into pineapples so that the school’s budget can be kept afloat, in… No Pineapple Left Behind?