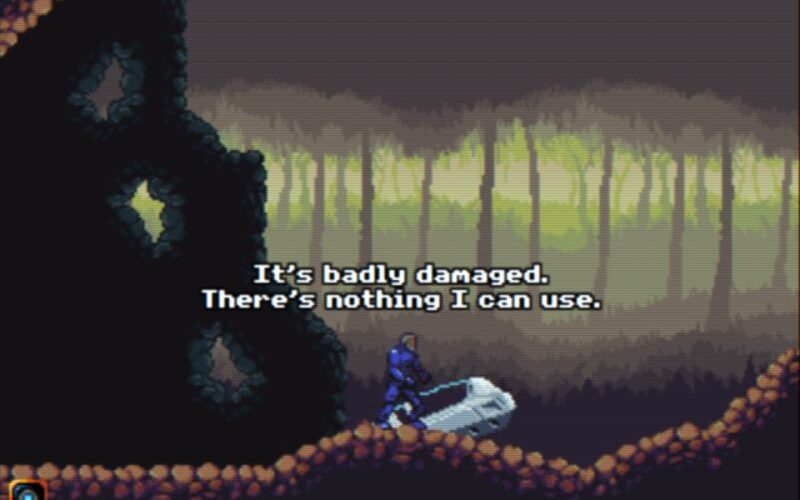 An encounter with Templeman Industries quickly turns sour, resulting in your ship crash landing on an alien world. This brings up a lot of questions, like why did they open fire? Were they trying to hide something? Also, what happened to the rest of the crew?

Like most games of its kind, you’re almost entirely on your own here, joined only what I believe to be the voice of the ship’s computer. As you go along, exploring caverns, hallways, and other areas, you’ll come across all sorts of items. Some are used to solve puzzles, while others are of the more offensive sort. What, don’t tell me you expected the planet to be uninhabited? No siree! You’ll have to fight your way past quite a few nasty looking creatures, between tracking down key cards to open doors and… well, getting past other obstacles.

Some of these make the game feel almost Metroidvania-ish, as you’ll often have to backtrack after acquiring a specific item that allows you to reach new areas; not to mention the suit upgrades! The earliest of these – and yes I know, spoiler – lessens your fall damage, which is more helpful than you might think. The only downside to revisiting an area is that enemies will have respawned. With few exceptions, they don’t really pose much of a threat, though.

As far as unraveling the mystery (or mysteries, rather) goes, you’ll have to settle for bits and pieces of emails, random notes, and the likes, as there are no cut-scenes. This helps create a thick atmosphere and furthers the sense of solitude, and no matter what you may unearth through these writings, chances are the authors are long gone now; it’s just you and… the aliens.

A Sci-Fi Action Adventure game with an ending that provides an alternative take on heroism as is typically presented, it is inspired by a wide range of classics of the genre such as Exile, Gods, Switchblade, Flashback and even the Dizzy series.

So far, I’d say it’s a fun, if flawed game. A great art style coupled with an eerie atmosphere equals a good time, and the puzzles aren’t overly complex, which is quite alright. What is not, however, is the platforming and combat. A mistimed jump can easily get you killed due to fall damage early on, and there’s a serious lack of enemy variety. And again, where’s the in-game map? But if you’re able to look past those issues, there is definitely fun to be had with Inescapable. Oh, and would you kindly help it through Greenlight?

Note: impressions are, as always, not based on a complete playthrough.