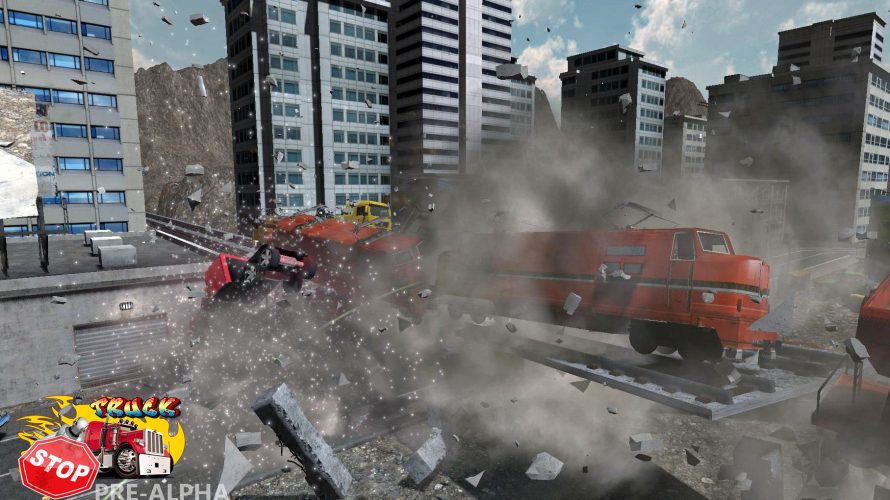 What do you do if your publisher no longer cares about a franchise you’ve been part of for the longest time, but you still do? Branch out on your own, of course! As such, an ex-Criterion member is currently attempting to bring back Burnout‘s chaotic crash mode with Truck Stop.

In case you, for some reason, are not familiar with the aforementioned mode, it originated in Burnout 2 and… it was awesome! No really, it was. Oh, you need more details? Well, it allowed players to speed down a road, fly off a ramp and cause massive mayhem and destruction at a junction! Timing and point of impact were essential since you wouldn’t get far (read: destroy many vehicles) without a chain reaction. This meant figuring out where to land and when, because simply flying hood-first into a big truck didn’t do much on its own. But with enough speed and precision, that crash could easily be the equivalent of lighting a stick of dynamite; hope the other drivers are insured!

But that was a long time ago, and since the most recent iteration (Burnout Crash, which was just plain awful), EA hasn’t shown any interest in that particular franchise, which is a darn shame. Would have loved a sequel to Burnout Paradise, or at the very least, something similar. Fortunately for Burnout fans, or at least, those interested in causing crash-chaos, Projector Games are working on bringing it back by way of a brand new game.

Based on details from its Greenlight page, we could very well be in for a modern version of the original mode here, where players get to crash through traffic junctions with huge trucks! Good times. Oh and remember the aftertouch feature? Yup, it’s back. Imagine plowing through a bridge with 18 wheels of steel in slow-motion, with mid-air control to help make sure you land at just the right spot, blowing up everything in the vicinity as you do… KABOOM! Also, Mars, because, why not?

After having released FortressCraft, I’ve worried about investing my time in writing games that people don’t want. To this end, we’ve put a single level and vehicle and ragdoll together for TruckStop, and released it on IndieCity

That’s just the beginning though. According to Adam Sawkins, their plan is to “add a major new piece of content each time we sell 1,000 more copies”. How’s that for a unique way to motivate the crew? Fans too, since this way, development progress is tied directly to sales (hint: IndieCity). Also, I’d hate to see a game like this end up stuck in Greenlight limbo, so make your vote count! And finally, since the game is still very much a WIP, be sure to provide them with feedback; positive or negative, I’m sure both are equally valued.