With this being the second game in the series, one might think it would act as a continuation of Rosa’s story, but that’s not exactly the case. This chapter takes place in 1973, where we find Rosa’s aunt Lauren Blackwell as the protagonist, accompanied by Joey Mallone. She’s not exactly fond of his presence and it seems that the feeling is mutual, but they have no choice but to work together since people are in need of their aid. Welcome to Blackwell Unbound.

It’s often been said that the more things change, the more they stay the same; something that certainly holds true for Blackwell Unbound. Even though it has a new protagonist, little has changed from The Blackwell Legacy, but… if it ain’t broke, why fix it? That said, certain changes have been made in this point ‘n click sequel, one of the biggest being that you now have direct control over Joey too. This addition could all too easily have turned gimmicky, but even though he’s not put to use as often as I would have liked, Wadjet Eye Games did manage to make good use of the character, who’s now at the beck and call of the player (poor Joey). 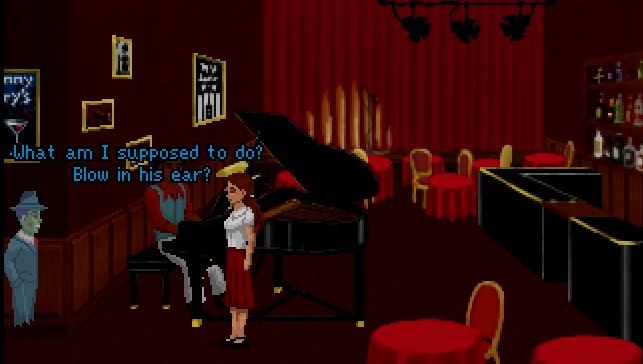 Remember how in the first game, he was more like a sidekick that Rosa would call upon when she needed help with something? Perhaps that explains why I’m finding being able to call the shots directly this time so enjoyable. He’s certainly got the wits to be more than a mere bystander 90% of the time, plus there are several scenarios where his charm and skill set is mandatory if the player is to make any kind of progress. Although, since the player has access to two different characters and is able to switch between them in the blink of an eye, why are there were only a few – albeit fun – occasions where Joey gets to strut his stuff? Maybe that’ll change in the later games.

Now, those who have read my The Blackwell Legacy review might remember how I made a big fuzz about the almost complete lack of puzzles in it. Well, the same can be said about Blackwell Unbound. While I personally like this approach, chances are it will make some people feel that the game is missing something. Puzzles are pretty much integral to the genre, after all, but I believe that only few would argue that it’s better to have only a handful that doesn’t seem out-of-place, rather than plenty that then reaches obscure levels. Whatever your preference, the shortage of brain-teasers certainly helped move everything along at a steady pace in this case. Too bad the same can’t be said about all the traveling you’ll be doing…

Show of hands, who enjoys backtracking in video games? No one? You there, behind– oh alright. Didn’t really think so, and I certainly don’t appreciate revisiting the same locations over and over again either. Especially after only acquiring tiny bits of information with each visit, used to open up new conversation options which then leads to somewhere I’d just visited not two minutes ago. Quite often I would stop by and talk to A, get some details on a topic which could then be used to visit B and get him/her to spill the beans on something he/she’d otherwise deny any knowledge of. Not exactly optimal. 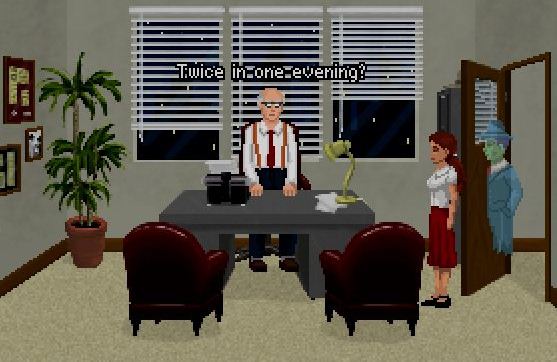 I guess in a way, this back-and-forth style questioning could be considered Blackwell Unbound‘s replacement for the infamous ‘combine notes’ detective work from The Blackwell Legacy since that feature has thankfully been downplayed significantly here. Most notes are now used as-is during conversations, and the few that needed to be matched were perfectly logical, provided one had paid attention during the dialogue which triggered the addition. And speaking of taking notes, even though the game is completely mouse-driven, there were actually times when you would have to type! Prior to being able to visit a location, you’d obviously need to know its address, and unlike in the first game, these were not simply given to the player (for the most part, anyway). I know this is might be considered a minor spoiler, but… hello phone book (remember, no World Wide Web in 1973).

Given the ability to remove or change one specific part of the game, I would have left the phone book puzzles on the cutting room floor without a second thought. Could be that I’m simply lazy, but honestly, a much better use of the whole ‘I need to figure out where this place is located’ might have been as a cut-scene of sorts. It would certainly have given Wadjet Eye Games an excuse to implement some (witty?) banter between Lauren and Joey, instead of forcing the player to browse a phone book of all things, and several times at that. Some might appreciate the extra level of interaction provided, but I didn’t care much for it.

Even though it’s a pretty easy game overall, you might still find yourself getting stuck (I certainly did), at which point I’d suggest striking up a conversation with Joey. Whether or not he actually likes being used as a guide matters little, because this guy is not one to ignore a damsel in distress. Plus, this time around the voice acting for everyone – including Joey – is spot-on. None of the static that randomly reared its ugly head during conversations in the first game is found here. 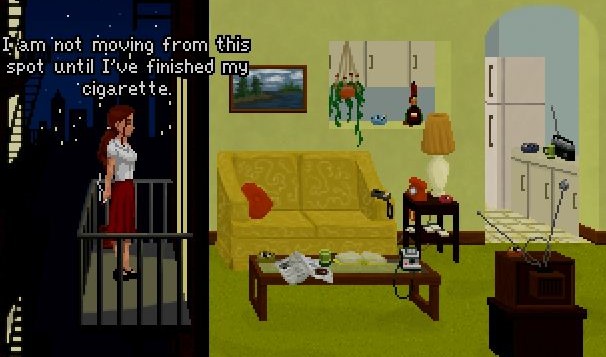 While I’m not usually one to go into great detail about the visual fidelity of a video game, something caught my eye about the look of this one. It’s almost like the attention to detail is lower here than in The Blackwell Legacy, its predecessor. Don’t get me wrong, the art style is still great, the difference just strikes me as odd. Maybe since I believe that a sequel should improve on what came before it, not the other way around. Then again, maybe the visual difference has something to do with this one taking place back in 1973? Who knows? Actually, Lauren might, but something tells me I’d have a hard time getting an answer in 2013…

Aside from the backtracking and cumbersome use of the phone book, I did thoroughly enjoy Blackwell Unbound, however short it was. Part of the reason could be that it featured a more convincing cast of characters than The Blackwell Legacy, but most certainly because being able to control Joey was fun; I just hope he’ll get to play a larger part in the two remaining games. Fun as it was to get a glimpse into the life of Lauren Blackwell, I do prefer Rosa as the protagonist, so here’s to hoping that Rosa will be back in Blackwell Convergence, the next part of the saga. Now if you’ll excuse me, I do believe the third Blackwell game is calling my name…