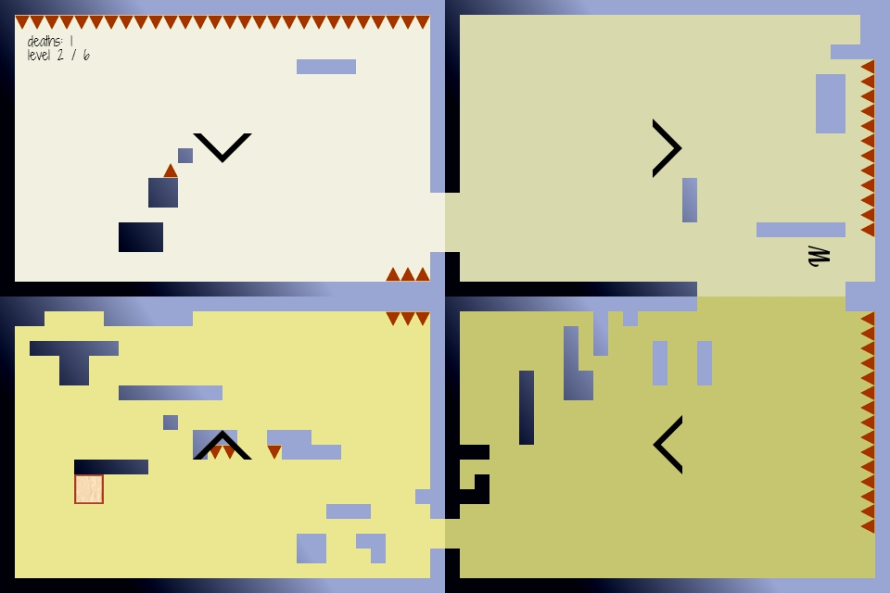 Back in the day, platformers were easy to figure out. Your character could jump, maybe double jump, perhaps he/she had some sort of attack, but that was it. No fancy stuff. That was a long time ago though, and… well, W4 is definitely one genre entry that takes some getting used to, as gravity changes depending on which world you’re in. Oh, and there are deadly spikes, because, why not?

Assembled for Ludum Dare 30, W4 is an impressive project that also puts the theme (“Connected Worlds”) to good use. You play the part of W, a normal guy/girl carrying a not-so-normal name, tasked with escaping captivity. Simple enough, as all you have to do is reach the exit, marked by a box with a red border. Thing is though, there’s a strong gravitational pull to deal with, on top of the aforementioned spikes. Also, the direction differs in each world. Four worlds combine to make a level, of which there are six in total, each featuring but one exit.

Now, even though this is hardly the most challenging platformer ever, chances are you will make mistakes and die, resetting the current level and increasing that fancy death counter by one. The controls are, for the most part, solid, and levels are short enough for death to not feel overly punishing. Honestly, the only genuine negative I found was the lack of narrative, once you’d moved past the beginning. Would have been nice with some sort of overarching story, however brief, befitting of your escape from, well, whatever this place is.

But alas, it was made in 48 hours, which is hardly a lot to make a fully playable game, so… yeah. Besides, what’s there is fun, even if the player has to make up his/her own story. In fact, why don’t ya head over to its Ludum Dare 30 page and take W4 for a spin? I beat it with fourteen deaths – surely you can do better!