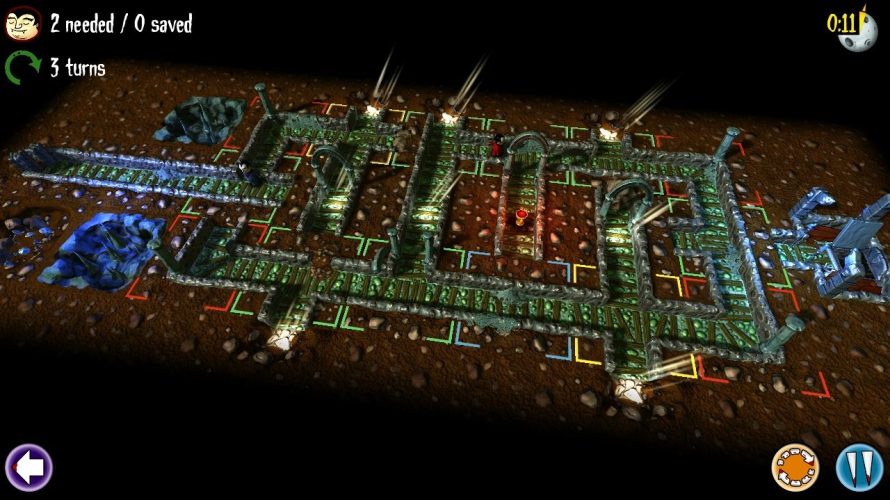 Since the developer didn’t give Vampires! a story to go along with the goal of getting a bunch of vampires safely back to their crypts, I’m going to pretend that they’ve been out partying all night and are too drunk to actually find their way; ironically, this actually makes sense considering certain aspects of the game, but I’ll get to that later. Sadly, no vampires from the Twilight saga were harmed in the making of this review.

If Vampires! played differently, it could easily have been a board game instead, or.. am I the only one who still remember Labyrinth? But alas, this is a video game and you’ve got but one simple task in each of the 65 levels: Help a certain number of vampires reach their crypts before sunrise, which is indicated by an in-game clock. Most of the gameplay revolves around turning tiles to guide the vampires down safe paths, because you have no direct control over their movement, and with plenty of hazards between them and their crypt, something has to be done to prevent these guys from becoming dead, rather than.. undead. 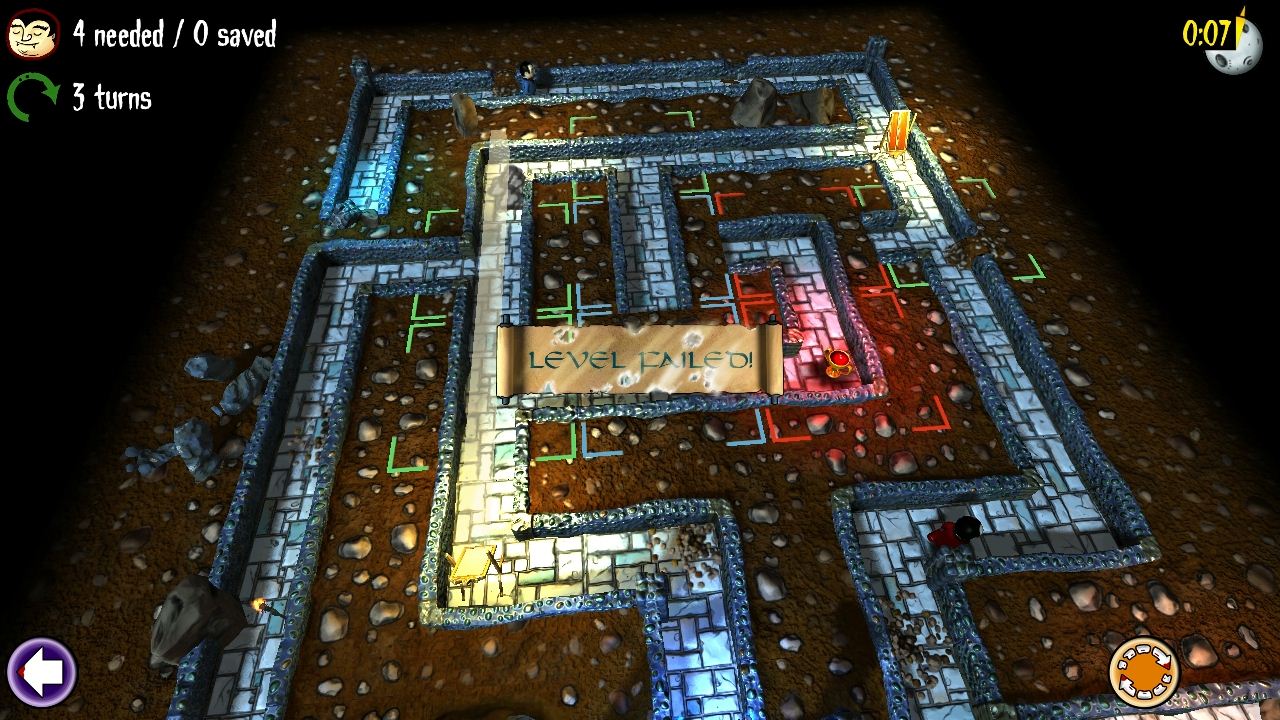 Bad puns aside, you do get a few semi-direct ways to help prevent the vampires from things like getting impaled by mobile wooden stakes or hit by light beams from rotating mirrors, along with many other dastardly traps. But while the traps are a constant issue, the ‘abilities’ are only available in certain levels, and include things like slowing the vampires down or turning them around. It’s not much compared to being able to simply tell them to stop moving temporarily instead, but it’s a puzzle game after all, and no one said it was easy.

I’d almost say that it’s anything but easy, with certain levels seemingly far more difficult than those right before them, and very few of the 65 levels in Vampires! can be finished after losing even a single vampire; this makes the five “skip level” tokens quite valuable, and you can always replenish them by finishing a previously skipped level later. On top of all that, you’ll also have to keep track of what color the clothes these vampires are wearing, as it determines their behaviour: Some may only turn left at intersections while other turn right, and there are even those who’s so drunk that they turn randomly! Vampires really shouldn’t drink.. 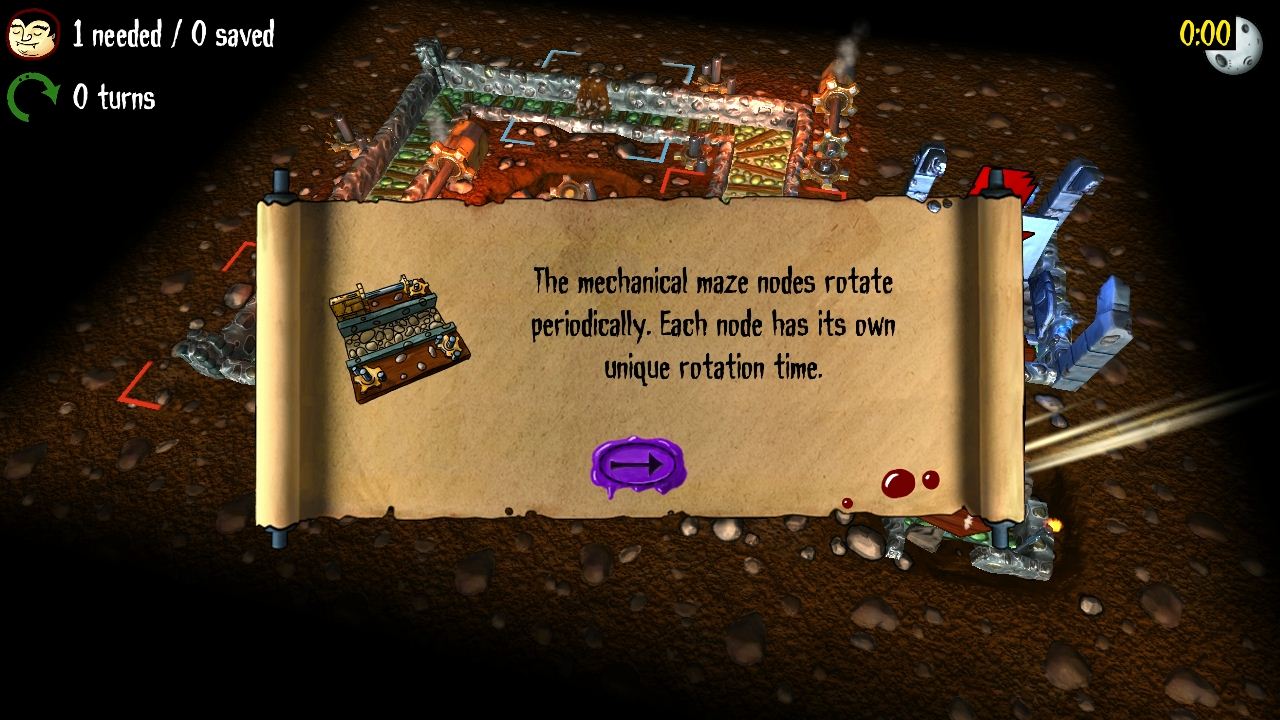 Thankfully, the drunk vampires don’t pose much of a problem until later in the game, as you start with a set of easy levels, each of which only one type of vampire and one type of trap. All that quickly changes, though, along with the difficulty, as every ninth level introduces either a new trap, vampire type or ability, with its own tutorial level.

And once a level has been unlocked, you can replay it any time. This enables you to repeat the tutorials for a quick reminder, but that’s not the only purpose it serves: Each level has certain requirements that must be met to get a gold (or even silver) medal, including time spent, number of vampires saved and turns used (turning tiles and placing webs/repellent). Medals aren’t the only reason for virtual trophy hunters to replay levels either, as 32 in-game achievements are also available, one of which require you to save as many as 500 vampires!

All in all, I’d say there’s plenty of fun to be had in guiding drunk vampires to their crypts, because even if certain levels are a bit overwhelming, in my experience, it never got to the point where I simply had no choice but to abandon the poor vampires. Maybe because I was too busy getting caught up in the moment while planning ahead, getting the timing just right, and praying that my mathematical calculations would grant me victory in the end.

What’s that? A demo? Why of course, and there’s even a browser version (via. Unity Web Player). While the demo is free, the full game will set you back $12.99 (PC and Mac), and to celebrate the release of Vampires!, the developer decided to launch their own shop, from which their games can be purchased without any kind of DRM or other ‘virtual attachments’. So.. what are you waiting for? Even vampires  need help sometimes!