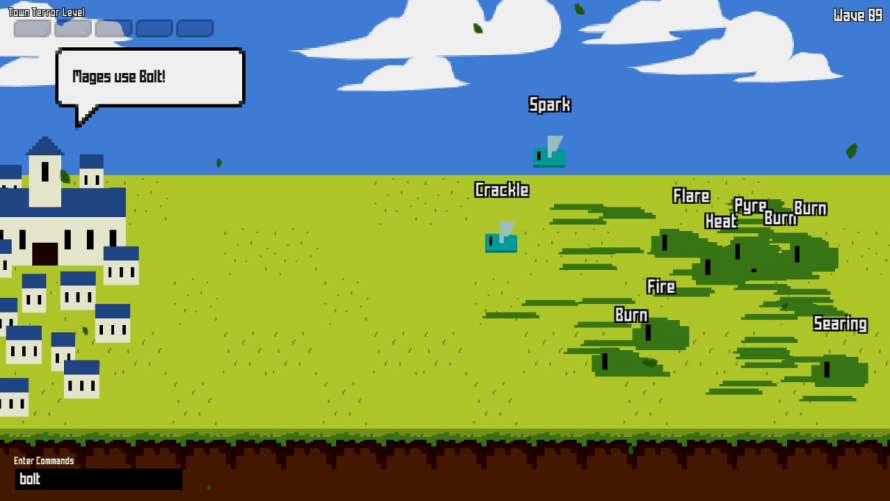 Slaying a fire-breathing dragon or laying waste to a dangerous sorcerer, sure, those deeds are probably considered very heroic somewhere, to someone. But they both pale compared to the job of a typing hero – like the one in Type Commander – as these unique individuals are capable of destroying entire armies… with a keyboard! No blades, spellbooks or arrows. Just a keyboard and their knowledge of its layout. Fascinating stuff, really.

Alright so a typing hero does kinda make use of spells because type-casting is still casting, ya know? But… but… it’s quite different from waving a wand or staff around, not to mention rather odd, quite frankly. Gets the job done though, as the citizens have borne witness to time and time again, whenever invading forces were at their doorstep. Forces which were repelled through the power of typing, flinging spells left and right, picking targets – and element – by typing words imprinted on each enemy.

I have beaten it, but it might take a try or two for your first time. Also the coolest part of my game is losing, just so you know.

One word after another, they’ll all fall – if you’re fast enough, at least! See, all it takes before the small town is overwhelmed and burnt to the grown is for five invaders to slip by your defenses. Five. That’s it, and you better believe that once the screen starts filling, prioritizing becomes a thing. Fortunately, the game doesn’t require specific casing and each foe does only come with a single word attached.

As such, with a bit of practice, you too can become the hero this town deserves (and needs), in… Type Commander!