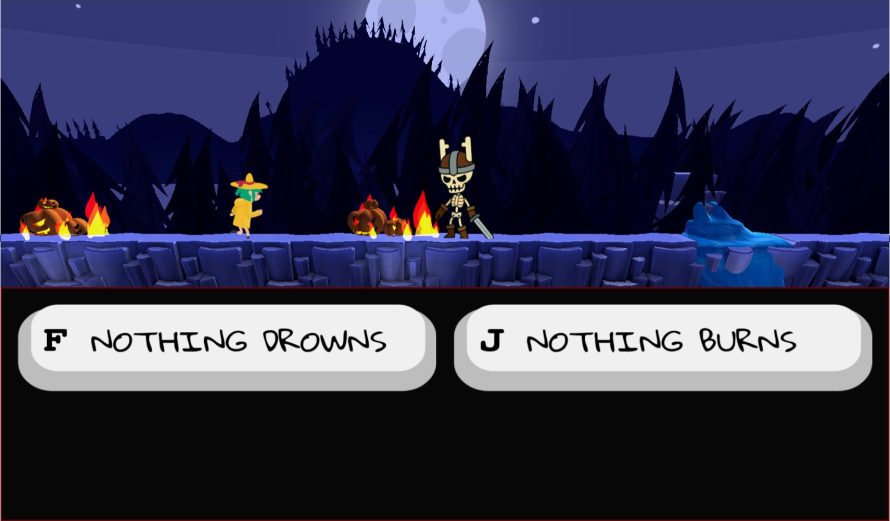 A quest for words. Why do people embark on one such? What could they possibly hope to gain? Words are not exactly hard to come by (in most cases, anyway), and their power only truly shows when combined in the form of a complete sentence. The Last Word proves that by merging a noun (“nothing”) with one of four different verbs to create… a magical spell. No really. Magic.

Oh, before I forget: in case that part wasn’t obvious, you’re not actually in control of the little girl in the above screenshot. Your interaction(s) with the world she’s currently attempting to run through consists of pressing/holding one or more keys to trigger a change in the way everything works; or put differently, temporarily remove one or more obstacles in her path. Thing is though, this enables enemies to also pass through said obstacle unharmed, so your timing must be impeccable – they need to perish, while your survival is of the utmost importance.

To who? An entity seemingly operating behind the scenes, having chosen the girl to help her find more words. Actually, ‘chosen’ is a bit of a stretch, as I’m sure she wasn’t exactly given a say in the matter. Either way, exactly what this being needs all these words for… well, you’ll have to play The Last Word to find out. It’s a brief, yet interesting experience, consisting mostly of timing button presses to overcome (more or less) logical puzzle-ish obstacles and little else.

Even so, it’s certainly worth taking for a spin, lovely art style, clever mechanics and all. Normally, wich a game like this, I’d conclude with “hopefully more will be added down the road”. No. Not in this case, as that would likely mar the experience. One which is undeniably better off in the compact – if a bit raw – format portrayed here. Sometimes less is, after all, more.

Note: Version 1.1 rather than the Ludum Dare 45 build (version 1.0) was played for this writeup.

The Last Word (LD45) is available on itch.io.

Facebook Twitter LinkedIn Pinterest Tumblr WhatsApp Telegram E-mail
Previous article Survival in the Simulated World of 'Pine' is Determined by Your Ability to Manipulate its Inhabitants
Next article 'Revelator' (LD45) Impressions: Fling Balls to Reveal That Which is Hidden