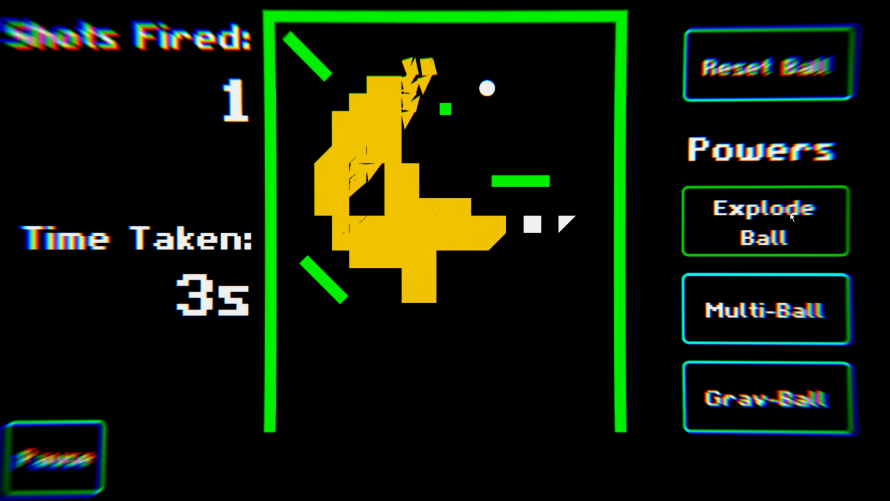 Explode Ball! Multi-Ball! Grav-Ball! Fling the ball! Paint the screen! Oh right, suppose some sort of introduction to Revelator is in order, even though it is actually quite simple. You’re in control of that tiny ball, able to fling and send it flying, direction and speed decided upon by you. As it travels across the screen, should the ball pass an area hiding something, this shall immediately be revealed. Like I said, simple, and yet… very enjoyable.

What with infinite amounts of balls and all, you will eventually be able to ‘clear’ each of the eight stages (all of which are available immediately from the level select screen), turning this one into a score-chaser more than an actual puzzle. Okay, so I guess it kinda is a bit of a puzzle game too, seeing how you won’t know where to fling the ball – at least the first time you play each level. Repeated attempts will, of course, take away some of that sense of discovery, replacing it instead with, well, familiarity.

That doesn’t mean you’ll be clearing stages in record time and/or with a single-digit shot count anytime soon, however, unless you’re an incredibly fast learner and truly skilled at nailing tricky shots. At least there is, as far as I can tell, no randomness as to where the ball goes, so if you can replicate angle and power levels accurately… sooner or later you just might have the art of ball flinging revelation down to an art. Or something along those lines.

Now, while level-specific obstacles will undeniably be both a help and a hindrance, there’s still no removing them – not even by way of the Explode Ball power. Oh, speaking of which: each of these (Explode Ball, Multi-Ball and Grav-Ball) can only be used once per level, and they do exactly what it says on the tin. One blows up, another spawns additional balls, while the last one, well, it increases gravity. Unfortunately, you’re forced to click each with your mouse, making it a tad difficult to time each for that perfect opportunity compared to, say, by way of key bindings instead.

Aside from that little nitpick, I’d say Revelator is a rather lovely creation – one that came to be in just 12 hours for Ludum Dare 45. Very groovy.

Revelator (LD45) is available on itch.io.