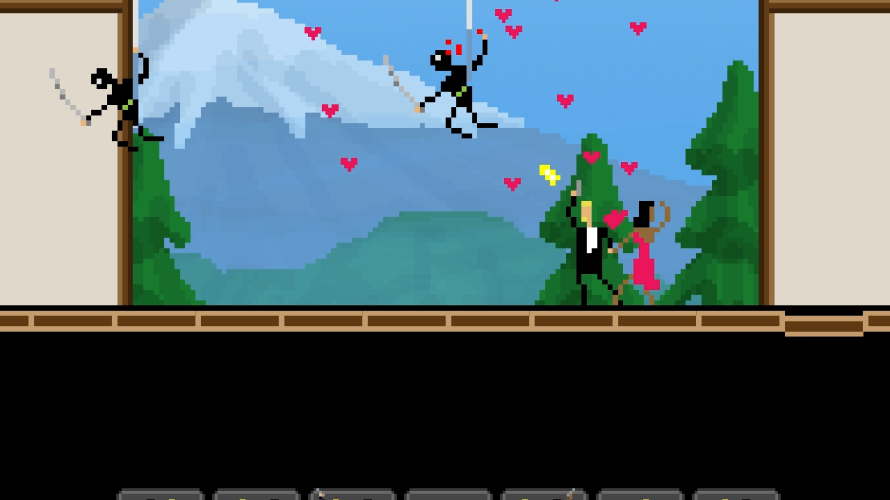 As far as romance goes, we’re quite a varied lot. Some prefer flowers, other chocolate, or maybe something a tad bit more elaborate, like a candlelight dinner. In the case of James and Anya, creating magic seems to involve tango. Sure, you can make them stop dancing, but only long enough to execute whatever move(s) you’ve lined up, be it blasting bad guys or simply moving the couple around.

It’s an interesting concept, to say the least, and one that originated during the 2013 New Mexico Game Jam. But that was a long time ago, and its creator has since expanded upon the game, adding enemies unique to each locale, along with an additional stage to… survive.

See, unless you pay attention to what’s happening on-screen, The Last Tango could very well end up being just that for these two, as it seems every ruffian and hitman-for-hire from gunslingers to ninjas are out to get them. On top of that, someone’s also working behind the curtain, so to speak, dropping boxes, scarabs, and opening random trap doors, hoping to introduce a couple of spies to spikes. But while that stuff’s fun and all, what really makes the game so interesting, is how it plays.

Superspies James and Anya are trying to enjoy their honeymoon, but they are marked for death by a raft of syndicates, governments, and masterminds.

Using the arrow keys, you’re able to maneuver the two either left, right or have them duck, while A, D, Q, and E causes either James or Anya to fire a shot in that direction (as indicated by the list at the bottom of the screen). Oh and as mentioned earlier, you have the ability to queue up moves, which can be incredibly helpful in getting the timing just right. Letting a hitman linger for too long will result in your untimely demise after all, and there are no second chances, no continues.

That last bit would probably have been more of an issue if the game offered a greater challenge than it does, but as it stands, getting sent back to stage one upon failing isn’t too bad. Besides, once you’ve gotten the hang of it, The Last Tango becomes more akin to a rhythm game, and pressing the right button sequence almost becomes second nature. Be sure to avoid standing on any wobbly floorboards though, because… spike pits.