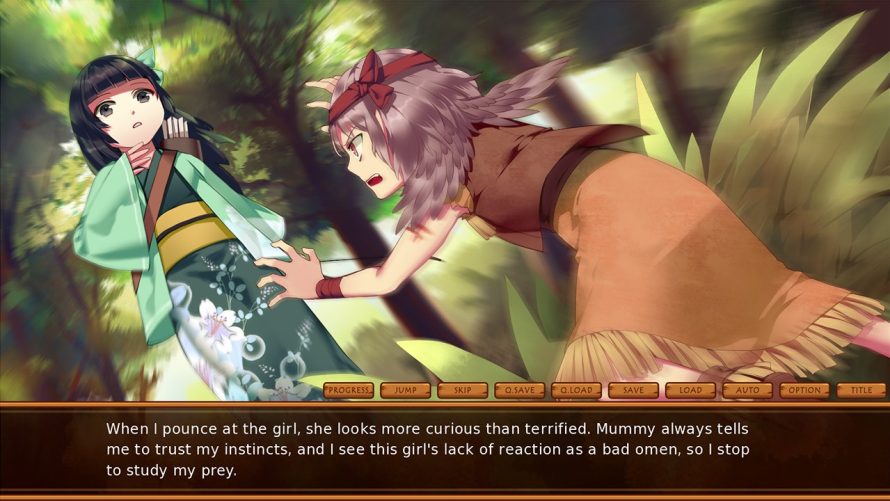 It’s been almost six months since The Last Birdling was announced (remember?), and I’d say the hard work of InvertMouse – not to mention Tooaya (character artist) and Efe Tozan (composer) – has paid off; based on initial user reviews at least, which are quite positive. Can’t say I’m surprised though, as the game seemingly tells a rather intriguing tale of friendship between a birdling and a human  – two species that don’t get along. At all.

As such, whether their friendship will stand the test of time or be torn apart by said war remains to be seen (and I for one can not wait to find out!). But for now, in favor of spoilers, let’s look at the feature set for this particular visual novel: first up, dual perspectives!

What this means is that the story will alternate between Bimonia (birdling) and Tayo (human), giving the player a chance to experience the world as seen by both protagonists. Something I often find myself wishing more genre entries would do, even if it does add complexity to its development, more to keep track of and such. Even so – first-hand experience is rarely worse than simply having events relayed by someone else, in an experience with such heavy story focus.

One day, Bimonia meets Tayo, a human child hunting in the forest. Bimonia fails to kill Tayo, and they instead become friends. Mother will be furious if she finds out, or worse, this relationship may cause tension between the two species to erupt.

Oh, and speaking of keeping track of stuff: the game also contains a glossary, or mini encyclopedia if you prefer, detailing various topics, items, characters and so on. Then, last but not least, multiple endings! With a grand total of five different ways for the story to conclude, I suspect at least one will not be of the ‘happily ever after’ variety. Even so, The Last Birdling awaits, ready for you to experience the tale of a possibly-doomed-from-the-beginning friendship!

The Last Birdling (demo) is available from Steam, carrying an $8.99 price tag.