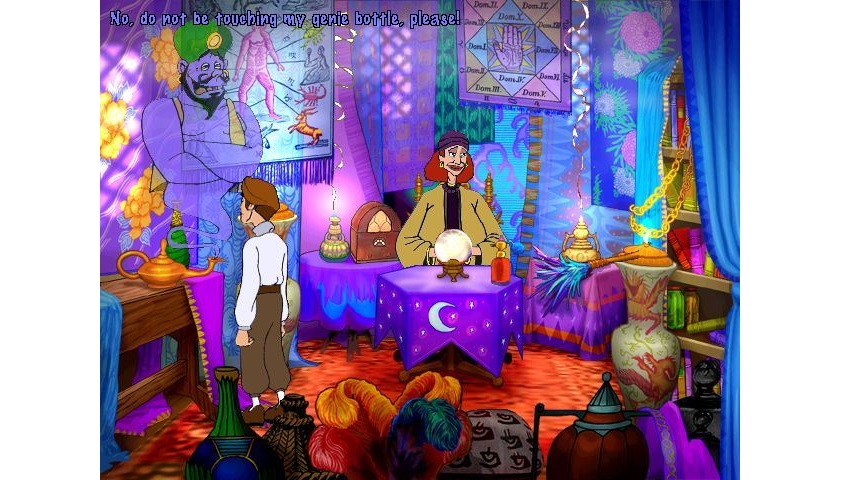 This time the spotlight will be shining on Gilbert Goodmate and the Mushroom of Phungoria, a humorous point ‘n click adventure starring the most unlikely of would-be heroes. Let’s see if we can’t help it escape the cold emptiness of Greenlight limbo, eh?

The sacred mushroom of Phungoria has been stolen, Grandpa Goodmate is going to be executed and things ain’t looking too good. Now it’s up to YOU… catch the thief, recover the mushroom and save Grandpa… all by the end of the week. So hurry Gilbert, time is running out… Oh, and do try to keep your hands off the Princess!

“All by the end of the week”, and yet, its creator promises “over 40 hours of adventurous gameplay”. Something isn’t right… somewhere. Maybe it’s the mushroom thing. Well, whatever the case, there’s no denying that this is one stylish game, featuring groovy cartoon-ish visuals akin to those in Curse of Monkey Island. But high-quality graphics aren’t quite enough to sell a game in this genre, even if they do help. No, there has to be something else too, like, say, a consistent level of comedic effort! Especially in the case of this one, as – based on the above quote – they’re definitely going for a silly story here. Whether they’ll be able to pull it off, throughout said 40+ hours of gameplay, remains to be seen. Oh, and the entire thing will be voice acted, which is rarely a bad thing for an adventure game. I for one can’t wait to see how Gilbert’s quest for that darn mushroom turns out. How about you?

So riddle me this, dear reader: why is Gilbert Goodmate and the Mushroom of Phungoria still struggling to get through Greenlight? It’s not out just yet (or at least, I don’t think it is?), but a demo is readily available. As such, how about visiting its Greenlight page and handing over a ‘yes’, if you like what you see? Remember, your vote matters!

Gilbert Goodmate and the Mushroom of Phungoria
Facebook Twitter LinkedIn Pinterest Tumblr WhatsApp Telegram E-mail
Previous article The Wizard, Archer and Knight Will be Back This Year In 'Trine 3: Artifacts of Power'
Next article 'The Last Door' Episode Six Enters Beta With New Pricing Model