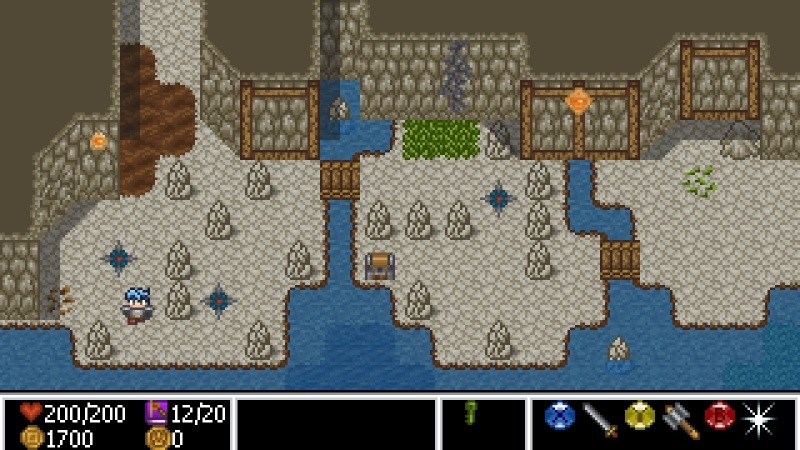 This time the spotlight will be shining on Gheldia, an old-school RPG straight out of the 16-bit era, complete with a blue-haired protagonist and a great evil to vanquish. Let’s see if we can’t help it escape the cold emptiness of Greenlight limbo, eh?

You journey as Lor to the Isle of Aria in search of a terrifying Beast Lord released during the Black Awakening. Lor is a “Slayer”, a special brand of mercenary with the ability to harness monster power and use it to turn the tide of battle. You must guide Lor through the dangers of the island to unlock the Serpentine Spire where the final showdown will take place. Do you have what it takes to become a legendary Slayer?

Ah, the Isle of Aria. My favorite vacation spot! What? Of course, I’m kidding. Didn’t ya read the part about ‘the dangers of the island’? But at some point – hopefully, later this year, I do plan on making the trip, albeit in the shoes of Lor, on a grand quest full of monsters to vanquish with powerful weaponry. Oh, did I mention how your choice of arms often shapes the path ahead, in this particular fantasy RPG? Good stuff. On top of that, you’re also able to augment equipment rather than replacing it, as there will come a time when busting skulls requires some additional POW. Basically… it’s time to once more play the part of a hero!

So riddle me this, dear reader: why is Gheldia still struggling to get through Greenlight? It’s not out just yet, but should be at some point later this year. As such, might I recommend visiting its Greenlight page and handing over a ‘yes’, if you like what you see? Remember, your vote matters!