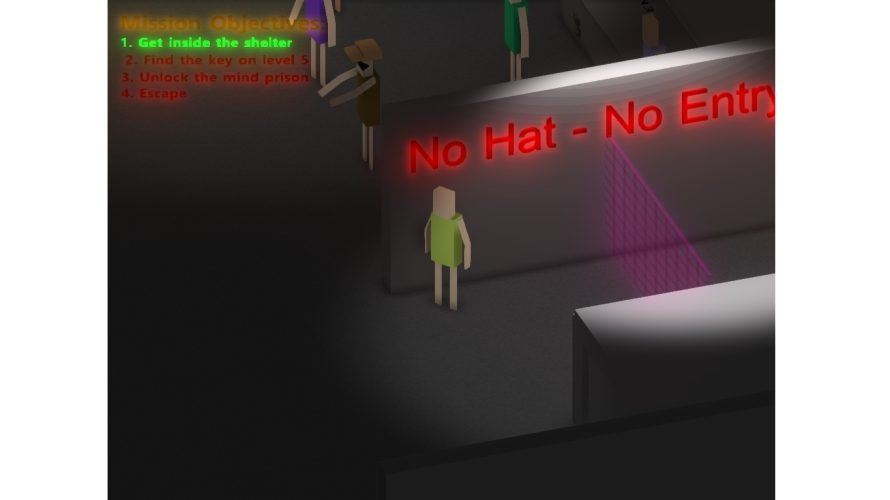 A mind is a beautiful thing… or so they say. Wouldn’t know as I’ve never been inside one, but guess what? You get to do exactly that in Mind Hacker! In fact, you’ll be entering quite a few, although not at once. That would just be silly. Your mission? Oh, it’s a simple one, except, it really isn’t.

See, an evil entity known as the Mind Corporation has taken over the minds of everyone. That’s a bad thing, in case you were wondering, but it does enable you to do some seriously creepy ‘hacking’, which is a good thing. What? Oh please. Well, Like it or not, you won’t get the job done without taking control of a handful of people, making them do whatever the situation calls for, as this is an eye-in-the-sky approach, rather than hands-on. Because… hacking.

While potential targets (ie. people) are plentiful and none have any kind of defense against your ‘mental intrusion’, your range is quite limited. Oh and you can’t jump either, but I’m sure one of those idle bystanders on the other side of the gap is more than willing to lend you his/her body for… a while. If not, well, too bad for him/her – not like you have to ask for permission, being a hacker and all.

You are the Mind Hacker and only you can do it!

Anyway, given its rather odd visuals, I’d say gameplay took precedence over visual fidelity here, although its style does seem appropriate somehow. Besides, Mind Hacker was made in 48-hours for Ludum Dare 29, so I for one am glad Martin Senovsky opted for an interesting experience, rather than one full of bells and whistles. Not that doing both is impossible, but given a choice, ya know? Now go hack some minds and thwart the plans of an evil corporation!