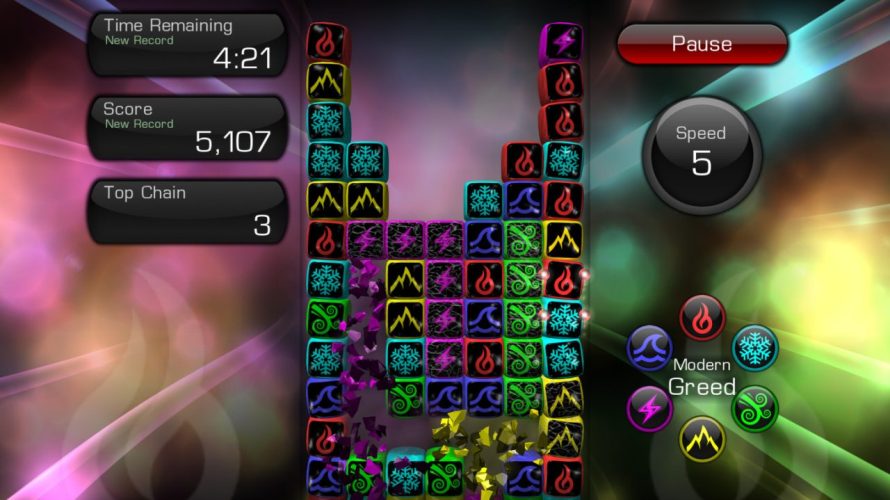 This time the spotlight will be shining on Elumiqs, a block-slider that puts you entirely in control of the action, as opposed to the standard turn-based model. What say we help it escape the cold emptiness of Greenlight limbo?

Elumiqs brings two key mechanics together: freedom to move blocks at any time and control over when the action starts. Most puzzle games clear blocks as soon as they match. In fact some puzzle games won’t even let you move without making a match. Elumiqs lets you do all these things!

See what I mean? I have a feeling most are getting a bit bored with typical match-3/block-slider mechanics, but this… this is different, and very much so. Bound to be a tad confusing at first though, having so much freedom and all, ya know? That said, chances are this is exactly what the genre needs: innovation! Packing several modes, one of which actually lets you fight the AI in fierce 1v1 battles, certainly doesn’t hurt Elumiqs‘ odds either. An AI which – according to its creator – adapts to whatever is going on in the game. A bold promise for sure, but who knows – maybe they’ll pull it off, creating a potential smash hit?

So riddle me this, dear reader: why is Elumiqs still struggling to get through Greenlight? It’s not out just yet, but should be at some point. Even so, how about visiting its Greenlight page and handing over a ‘yes’, if you like what you see? Remember, your vote matters!