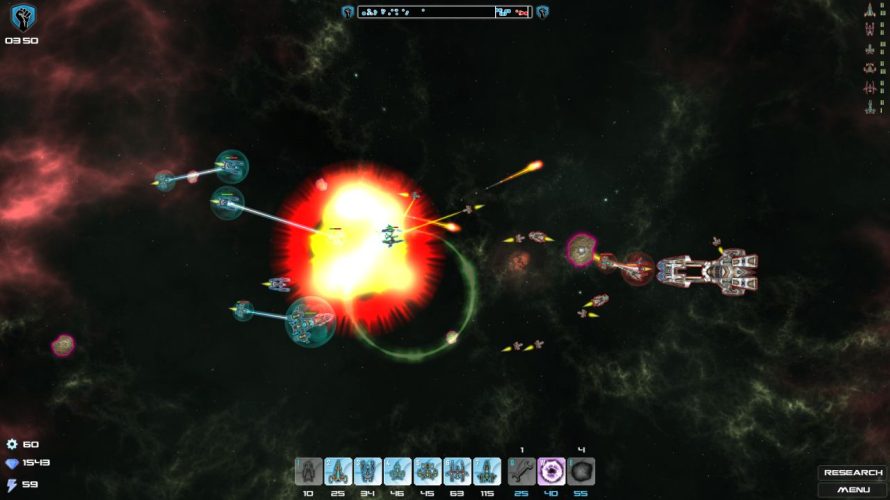 This time the spotlight will be shining on Aeon Command, a strategic tug-of-war between three different factions in the depths of space. Let’s see if we can’t help it escape the cold emptiness of Greenlight limbo.

The three factions of the Aeon Nebula have broken out into war. The Alliance, Exiles and Cyborgs are each struggling to obtain dominance over the mineral rich nebula.

Space… the final front – right, not gonna happen. Anyway, don’t let the somewhat basic looks of Aeon Command fool you, for its gameplay is anything but. Your job as [faction of choice] is to destroy the opposing mothership by sending an army of ships towards it, crushing the poor thing with laser beams and similar weaponry! YEAH! Uh, right. While you could say that it’s a 2D RTS, since it has both resource management, unit construction and combat (kaboom?), I’m going with the developer’s description, which is “tug-of-war”. You’re kinda ‘going back and forth’, after all, as stuff blows up everywhere in a frantic attempt to push through and create a ‘big bang’ at the other end of each level. Also, KABOOM! Oh and when you’ve had enough of duking it out with the AI, there’s always multiplayer – say hello to your friends for me as you demolish their forces.

So riddle me this, dear reader: why is Aeon Command still struggling to get through Greenlight? It’s been out for a while (since October 2012), so lack of availability is certainly not the reason. If you haven’t done so already, might I recommend visiting its Greenlight page and handing over a ‘yes’, if you like what you see? Remember: your vote matters!

Aeon Command is available for Windows, Mac and Linux from the official website, priced at $3 and without any DRM.