In case you’re not familiar with the classic Snake game, which Snayke is based on, you play as a snake, tasked with eating dots that each further extend the length of your body. It’s not as simple as simply moving around, going ‘gobble gobble’ through the dots though, because eating them extends the length of your body, and any collision – including with that of your own body – kills you. But that was then and this is now: Enter Snayke, a redefining of the 2D dot-gobbling genre.

Even though Snake originated in arcades in the late 1970s, it was not until the 1990s when I got my first cellphone that I was introduced to what has since become a timeless classic. It was an instant hit and while the years have not been kind on the original, there have been countless attempts to mix things up and modernize the formula, including more recent ones like qrth-phyl, but alas, most of these have been exclusively on mobile devices. Some might argue that cellphones and tablets are the only place where a game like this could ever find a proper home, but I for one am glad that Snayke is instead a Windows, Mac and even Linux game; iOS and Android owners have plenty of clones to choose between already anyway, good and bad alike.

There’s no denying that Alexander Szpakowski’s Snayke draws inspiration from the original, but he certainly did more than simply tweak it a bit and release it as a commercial game – this one’s got a puzzle mode, a level editor, (local) multiplayer and for those times when you just want to play the plain ol’ Snake, there’s a ‘classic’ mode. Had I not seen the puzzle mode with my own eyes, I would definitely have thought it to be pure madness, but not only does it actually work, it’s also a lot of fun.

It’s true that simply focusing on avoiding crashing into walls and/or your tail can prove to be quite challenging on its own, but that does not mean that dots that act like portals, explode upon contact and clear a path, along with plenty of other surprises, were a bad idea. If anything, I’d say that they made for a more entertaining and unique experience than 2D dot-gobbling has ever been. Long live puzzle mode!

Whenever you need a break from the hectic pace of puzzle solving, classic mode is exactly what the name says: Snake in its purest form, without dots that explode in your face, teleport you all over the place, or anything fancy like that. It is however a very tweakable mode, that can be enjoyed with up to 4 people (or bots) at once, in a race to those delicious dots; or more likely, to see who’ll be the last snake standing. Screen wrapping can be turned on and off, along with power-ups and it’s even possible to choose how big an area you wish to play on, none of which you get to alter in puzzle mode, for obvious reasons.

Those who enjoy blazing through levels as fast as possible are bound to appreciate that Snayke records the completion-time in all levels, and then shows that record the next time you play that level, which is kinda like the game saying “go faster and do better this time!”. Should you feel like showing off just how you solved that tricky puzzle level or a personal record in tricky maneuvering in classic mode, make sure you save those replays so you have proof of your accomplishments. 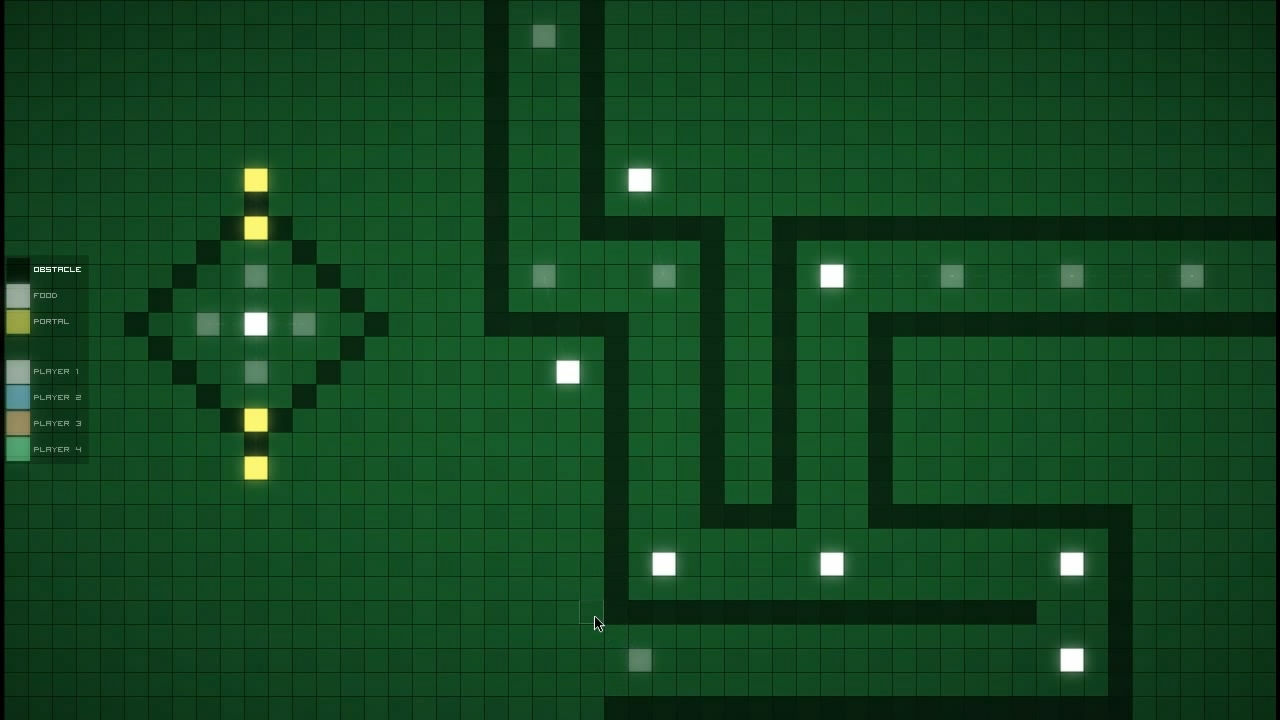 You’d think that classic mode, puzzle mode, replay saving and speed-running features would more than enough, right? I mean, this is just a one-man project, after all, but no: A level editor has been included, and it’s extremely user-friendly so anyone can make puzzle levels with dangerous twists and turns in no time. It’s actually as simple as painting, because all you do is pick a dot color/type, place it on a grid and you’re well on your way to making your first level. Want proof? This video paints a good example.

Last, but not least, the musical side of Snayke comes from Anton Riehl, who has previously composed scores for Star Wars: The Old Republic and Overgrowth, along with other games, short films and commercials.

Snayke will be available on Desura for Windows, Mac and Linux on the 28th this month for $4.99 (with a 30% launch discount, ending October 1st). For more information, head on over to http://snayke.net, where the 20-level demo can be downloaded (note: only the full version has replay saving and the editor). Don’t forget to follow the developer on Twitter (@slime73), and let’s help him get his game on to Steam, eh? It’s Greenlight time!