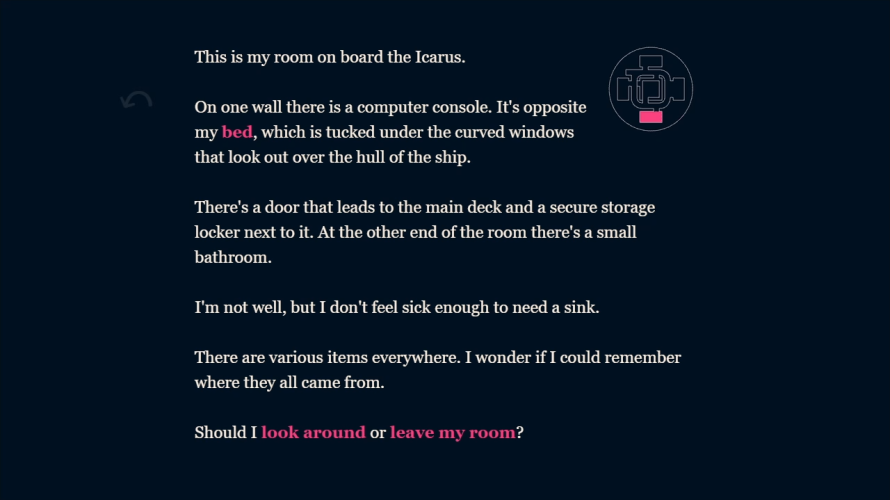 I knew prior to starting She that this piece of interactive fiction would be an emotional experience; a story of loss, of a long-gone love. But I figured Sophie, its protagonist, would be able to change whatever happened, whatever might have gone wrong, with the time machine. Isn’t that how such a gizmo works, after all?

Pitched by its creator as a “romance that ended yesterday, 150 years ago”, even if Sophie were to track down and return to her girlfriend now, it wouldn’t matter as she would have already died of old age. Which leaves only a single option – time travel! A simple matter, if not for the fact that her memories appear to be fuzzy at best and she’s not feeling well, to boot. Fortunately, there should be an easy fix for the former, and… well, I’m sure that the latter will solve itself eventually.

The romance has ended, and the adventure is over. All Sophie has left are her memories… and a time machine.

See, since her memories aren’t downright gone (ie. our protagonist is not suffering from amnesia, thank goodness), roaming the halls of the Icarus, a time machine/spaceship, should help trigger one or more trips down memory lane. But why did she wake up dizzy with an aching head, where is everyone, and can past mistakes truly be fixed by way of time travel? So many questions, and with a little luck, perhaps you shall end up with answers to all of them by the time the credits roll.

Although with its 9000+ words, it probably goes without saying that there’s a lot to see and do onboard the Icarus, quarters dedicated to other characters and a variety of other rooms can be explored in the hopes of finding something resembling an explanation for the events that transpired. There are plenty of backstories to uncover too, each acting a bit like metaphorical puzzle pieces, helping flesh out the story and its characters.

Speaking of the world itself, by way of clever Twine wizardry, there’s an ever-present mini-map so you’ll never get lost. Outside of Sophie’s memories that is. Quite easy to lose yourself in those, the good and bad, as each choice drives this bitter-sweet tale towards one of thee different endings.

She is available on itch.io, carrying a $5 price tag.