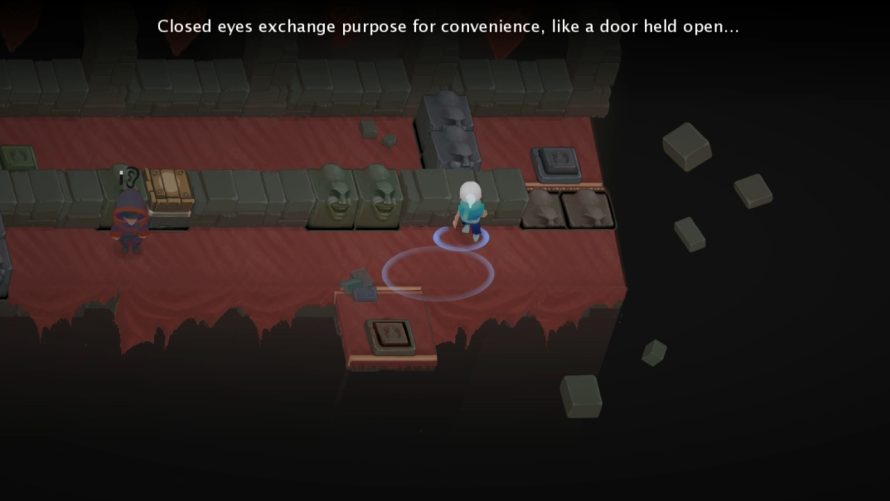 You are a Seer; blind, yet able to perceive your surroundings better than those with the gift of sight. Imprisoned without proper cause, it’s time to break free, face those who are to blame, and maybe shed some light on… a world gone dark.

As I’m sure you can tell from the above screenshot, even though your character is blind, you are not. In fact, since the game is played from a top-down perspective, you are able to see everything in close proximity. Hostile NPCs, on the other hand, are seemingly blind as bats but make even a hint of noise nearby and they’ll hunt you down. They won’t hesitate to apply lethal means either, should you get caught.

To aid you in what would otherwise be an impossible task, any sound you make – be it from footsteps or throwing your voice – emits a visual cue from your character. This makes it easy to figure out if there’s room to be sneaky, along with from how great a distance you can attract their attention by shouting. The latter is used frequently, and not just to get them out of the way, but also to manipulate pressure plates. These come in a variety of colors, each of which sinks that same color block while held down, enabling you, your voice, NPCs, or even bullets to pass by.

Become a Seer and explore the beautiful, mind bending, twisted fantasy that is the world around you.

See, while everything starts out nice and easy with relaxing music playing in the background, needless to say, the harmony doesn’t last long. Suddenly, dodging NPCs and pushing blocks around becomes the least of your worries. Much too soon, cannons, spike traps, and an uncanny fog-like substance join them in attempting to make your life as miserable as humanly possible. 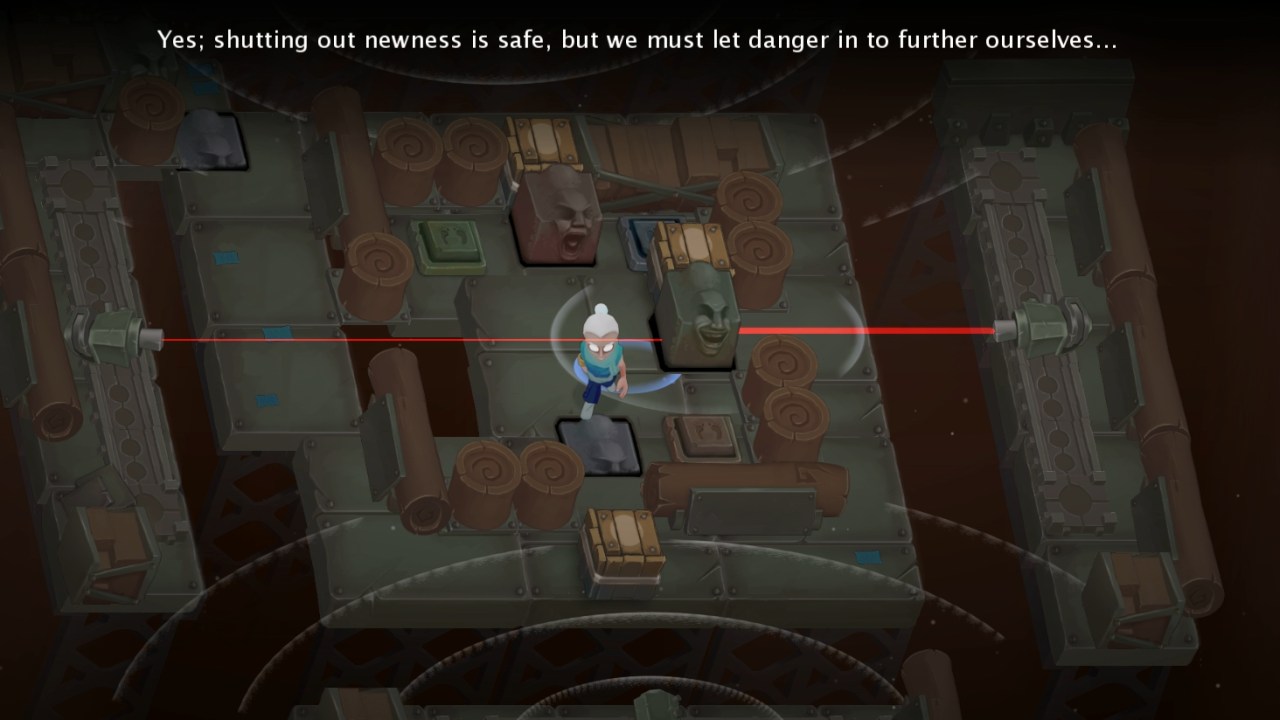 Ain’t nothing a little careful planning and pattern memorization won’t take care of though, as I did not experience any truly random elements in the level design. Cannons, for instance, won’t fire unless at specific locations, and patrolling NPCs always follow the same route(s). Doesn’t mean you can build up a strategy and execute it flawlessly every time though, as certain events can only be triggered through precise timing and/or movement.

Much as I hate to admit it, this particular mechanic actually caused me to get stuck in a later level (3-12, to be exact). Not due to bugs or glitches, mind you – I simply couldn’t get the timing right and decided to call it quits instead. But since I had experienced so much at that point, most of which was a ton of fun, I figured, better to stop there and write the review, than let my lack of skill build even more frustration.

Anyway, from the very get-go, the game drops vague hints of sorts, at the beginning of every level; sometimes even story elements. Because of this, it’s almost as if someone is watching your every move, nudging you in a specific direction. When combined with the disembodied voice of See No Evil‘s infrequent cut-scenes, it’s almost as if you’re not on this quest by your lonesome self. Almost.

In spite of that, even the most frustrating levels didn’t stop me from enjoying the game as a whole. Found myself pondering what to do next frequently, sure, but in retrospect… that just made the ‘oh, of course!’ realization all the more rewarding. On a somewhat related note, most of my hardships actually came from trying to move boxes, as the game seemed to demand pixel-perfect positioning before it’d let me do just that. Very odd. 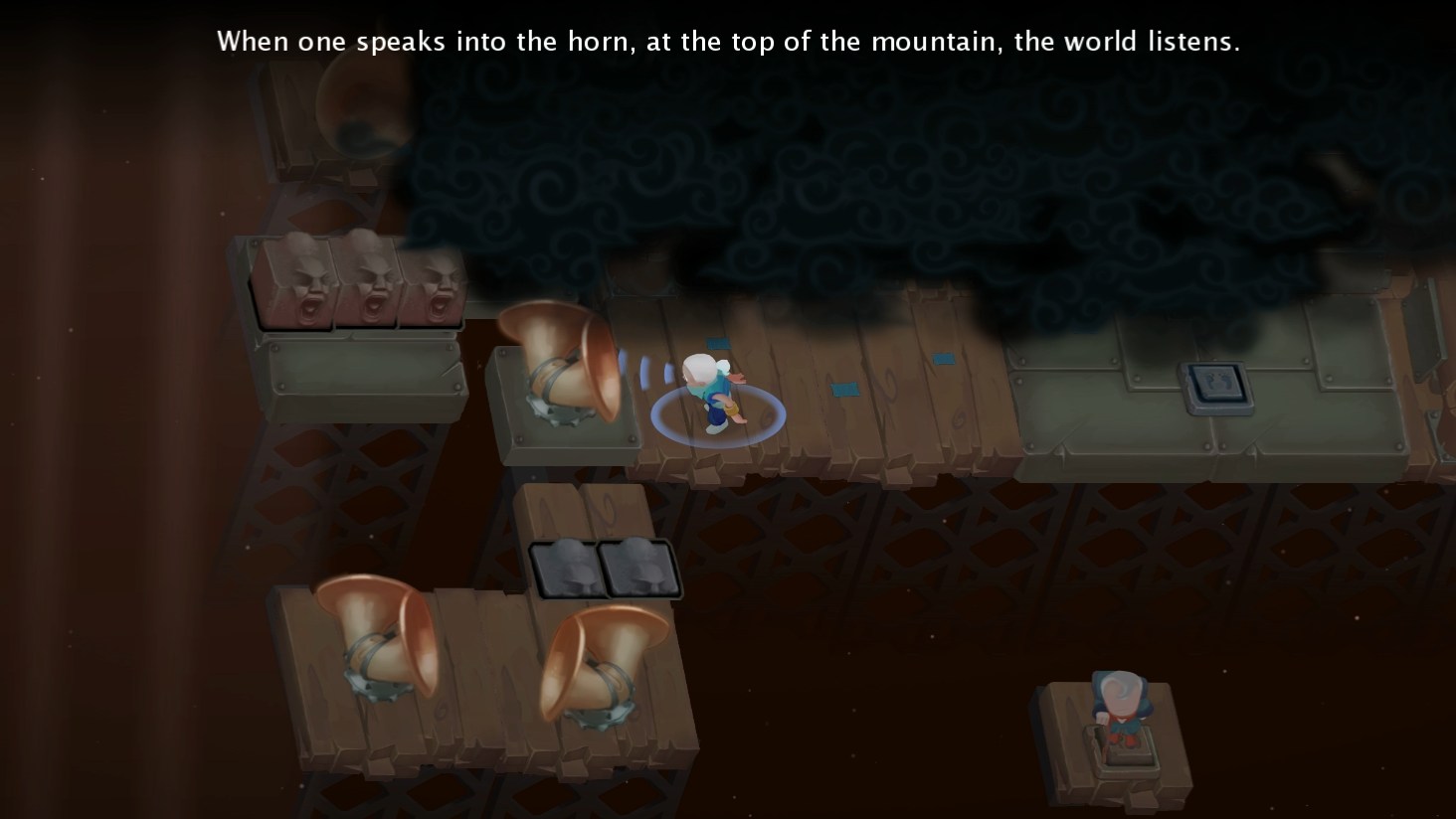 All in all, even though I was unable to finish it, See No Evil still gets a strong ‘add this your collection’ recommendation. It packs a funky mix of stealth and puzzles, along with quite a diverse sound mechanic (shouting at an enemy never gets old) after all, and plenty of variety to boot. In fact, I’m surprised that repetition never kicked in, given the somewhat limited amount of ‘pieces’ (cannons, blocks, etc.). Surprised in a good way that is, and not one that’d make me… shout at the puzzles.

See No Evil is available for Windows from Steam and direct (via. the Humble Widget), carrying a $15 price tag.