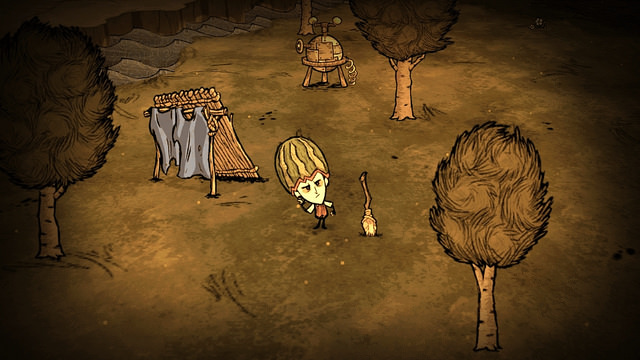 Don’t Starve is not for the faint of heart, nor for those without patience and willingness to start over from scratch upon dying. Which will happen, by the way, and when you least expect it too. Terrifying for sure, as my many attempts at surviving the wilderness can attest for. Let’s just say… starvation was the least of my concerns.

Man, the stories I could tell about my adventures in that game. But alas, that’s for another time. This is about Klei finally spilling the beans on when fans will be able to get their hands on Don’t Starve for the PlayStation Vita. Oh, and of course, the upcoming beta of the co-op DLC/expansion, Don’t Starve Together, even though it’s, well, closed.

So Vita fans, mark your calendar: September 2nd in the US, September 3rd in Europe, Don’t Starve: Giant Edition, $14.99! Why Giant Edition? Well, they bundled the main game with Reign of Giants ($4.99 DLC); bad pun, great reason. It’s also cross-buy (not cross-play), which means that buying it on either PS Vita or PS4 will get ya the other version for free. Lovely, eh?

This next bit of news may or may not be as exciting, but even though the beta isn’t ‘open’, at least it means that development is progressing nicely. Plus, it’ll be free to current owners of the Steam / stand-alone version. The announcement post also mentions Early Access, so it seems those willing to pay will be able to play it prior to launch. Whether the whole ‘free for current owners’ thing applies to Early Access to remains to be seen, although I honestly doubt it. More like, ‘free come launch’.

Anyway, Don’t Starve Together should be in the hands of testers come September 23rd at the latest, according to this comment from their Reddit AMA. I’m sure we’ll hear more about it in the weeks around / following that date. If nothing else, the forum is bound to start buzzing with feedback from bug reporters and the cries of unfortunate adventurers. I mean, based on the video (below), the ‘co-op’ aspect… well, something something murder spree. Oh, how I pity those who’ll be joining me.

Don't Starve Together Prototype Playtest
Watch this video on YouTube.