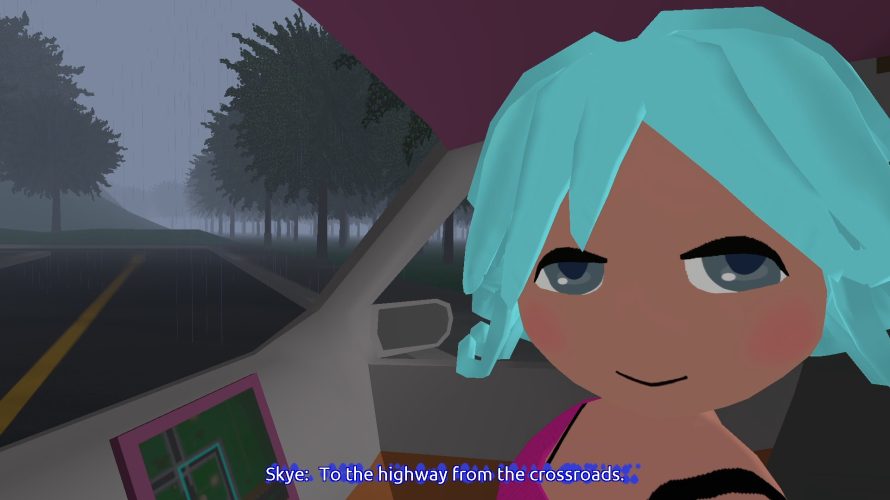 A few days at a cabin deep in the woods of Rainn and Skye, away from the noise of civilization and the downpour that just doesn’t seem to be letting up? Sounds like an absolute delight! Skye, Rainn’s girlfriend, has managed to arrange such a getaway for the two of them, which is an almost guaranteed good time. If Rainn can keep her eyes on the road and not let herself get too distracted by Skye’s flirtatious behavior, that is.

Now, having now made the trip from start to finish multiple times, I have to say, that’s a pretty big ‘if’. Playing the part of Rainn, the player is supposed to drive the couple to the aforementioned cabin, but you know how it is: when someone talks, unless you’re either trying to be rude or have another reason not to look at them during, you kinda almost automatically end up doing just that. In spite of this being a video game, I found myself behaving just like I would in real life – someone talks, you either make eye contact or at least look at them. This might have lead to a bit of a bumpy ride as I did not always remember to ease off the gas. Oops. 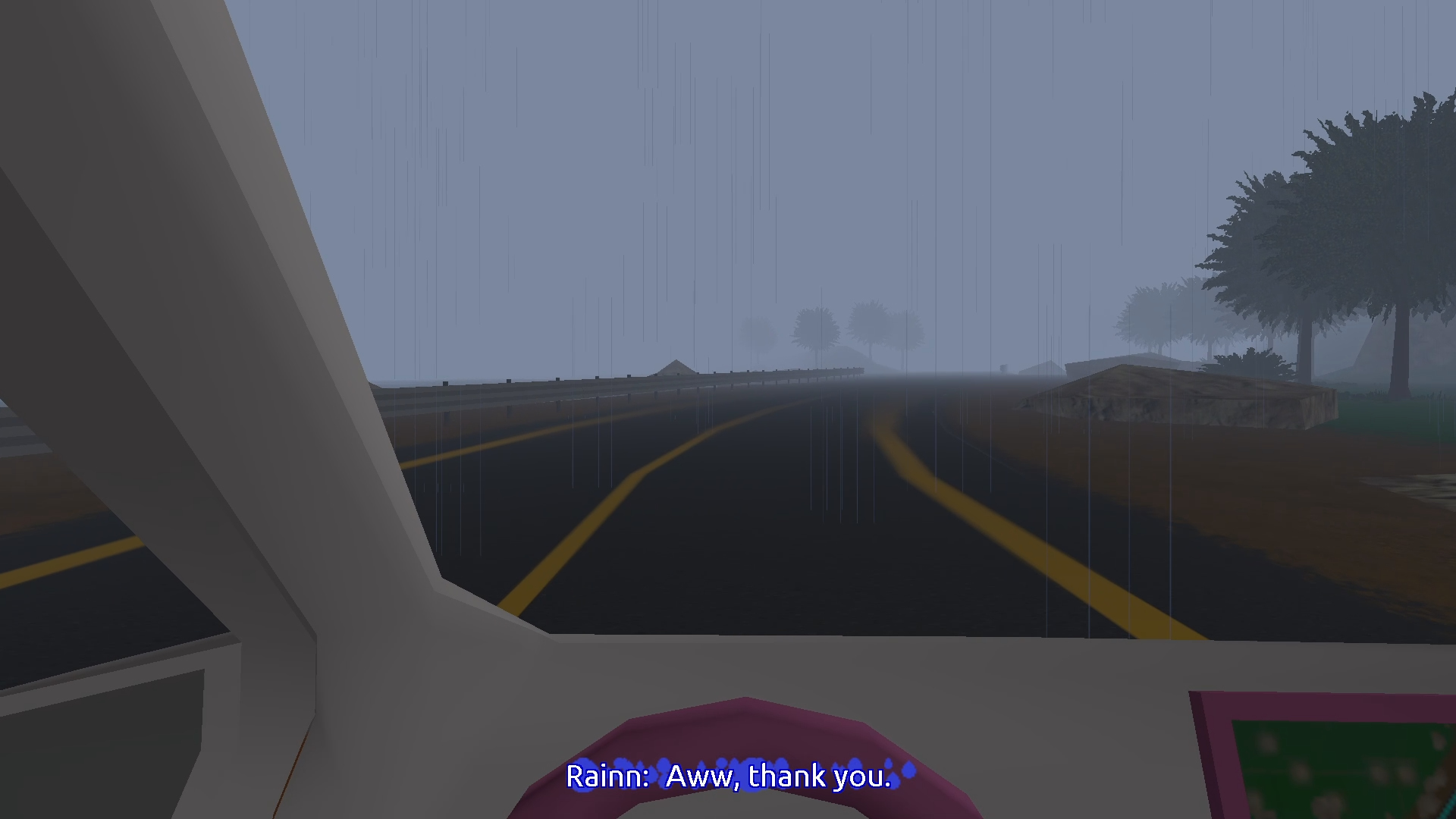 Then again, Rainn and Skye doesn’t have fail states or even a health system for the car, and if you somehow manage to, say, get stuck in a tree (which I’ll proudly admit to experiencing), just pause the game and pick the towing option. Problem solved. One thing does differ depending on your skill behind the wheel, however, which is… the dialogue. It’s a nice little touch that gives the game a bit of replay value, and even if that was the only part in which the conversation changed noticeably depending on the player’s actions, I’d likely still recommend making the trip at least twice. But there’s definitely more to it than that.

See, every so often, the player will be prompted to throw caution to the wind and turn to face Skye. What happens if you do this? What happens if you don’t? Should you hit the brakes or keep going? Oh right, already covered that last bit. As for the other two, well, try it and see for yourself. Seriously.

The road trip features chill driving while chatting with Skye about some likely and unlikely circumstances. And, perhaps, there will be something nice at the forest cabin too once you get there…

Ah! All that and I haven’t even mentioned how much detail has seemingly gone into Skye’s model as there’s a fair bit happening in spite of the low polygon count. I mean, sure, there aren’t any fancy features like realistic lip-sync or hair physics in Rainn and Skye, but even so – even little touches of animation help bring a character to life, and that’s certainly the case here. That also applies to the scenery and the road leading the two young ladies to the cabin, its low-res nature actually goes well with the other visual aspects. So much fog though. Thank goodness for the built-in GPS of the car, or I might never have– nah, it’s fine. The path is relatively straightforward and if all else fails, I’m sure Skye knows the way, having booked the cabin and all.

All in all, this little lesbian road trip – as its creator has aptly dubbed Rainn and Skye – might not be overly lengthy, but is that really a negative when it’s super cute and relaxing? Of course not. So what are you waiting for? A written invitation? Heavens, chances are the weather would ruin it en route. Just click the link below and hit the road instead. Trust me.

Rain and Skye is available on itch.io for free (PWYW).