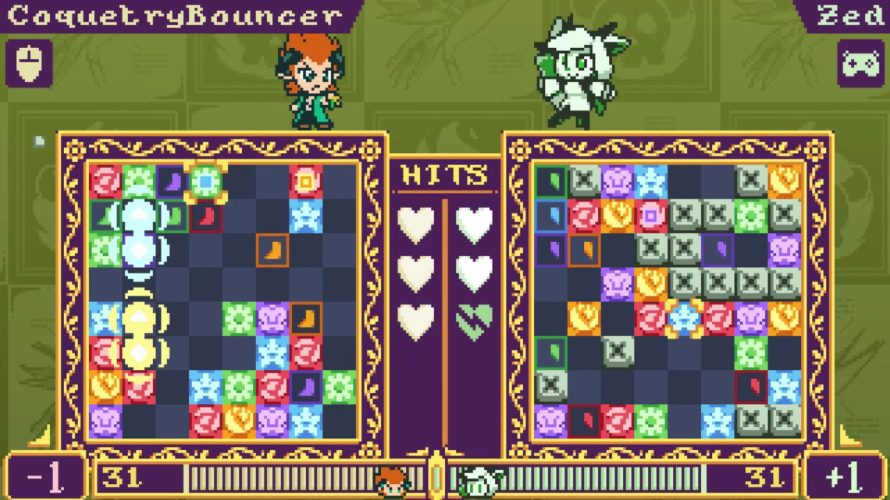 Welcome to Florea, a land in which you, the player, will face many, many challenges. Do not make the mistake of underestimating them, just because… wait. Feels like I’ve already used this exact opening paragraph… for an article… before. Hmm… ah yes, Petal Crash was released late last year, and now we have Petal Crash Online, an online-enabled version of the groovy pixellated block smasher – complete with extra bells and whistles!

Since the core experience hasn’t changed all that much, rather than repeat what I’ve already written about Petal Crash, I’m simply going to refer to this article and focus on the additions and changes instead. Then again, surely you’re already super familiar with the original, having played it for countless hours, mastered every aspect so you’re ready to absolutely annihilate other people in this new online-enabled version that’s currently in beta: public and private lobbies featuring character emotes (because why not?) and a selection of pre-made phrases to, well, communicate. On some level.

Remember the multiplayer modes from the original, like Petal Crash, including Tug-of-war, Trash Attack, and Clear Contest? Great, because they’ve all made the transition to this version. Oh right, 2P Co-Op too, somehow. Guess that means 2v2 with a friend – or stranger – online is a thing, which is going to be quite interesting, as far as latency goes. But before we get to that: don’t worry, custom rulesets are also part of the package, much like Petal Crash Online for those who own the original (wait, what?).

It’s time to take your Petal Crashing skills to the global stage! Puzzle battle friends all around the globe with Petal Crash Online!

Beta. Used to be a word that made people absolutely scream in terror at the thought of throwing money at a game in this state, and in the case of Petal Crash Online, it means that “new features will be added over time before it’s made available to PC users on other platforms”, among other things. Also, the popularity of Early Access on Steam clearly shows how the hatred for paid betas has all but vanished. Which is fine. Perfectly fine. As long as you know what you’re getting into when busting out that fancy credit card. Anyway, online! Latency! Netcode! Thanks to retro homebrew developer, NovaSquirrel and Petal Crash AI coder Jill Katze, “rollback netcode” is a thing for players and spectators alike to help keep everything perfectly in sync.

So, think you’ve got what it takes to be the very best… like no one ever was? Be sure to stop by the Friend & Fairy Discord then, strike up a chat with like-minded competitors!