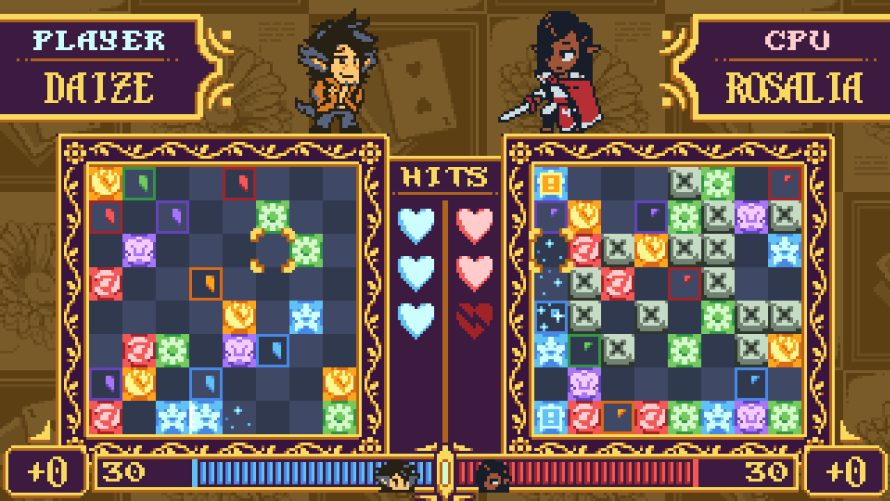 Welcome to Florea, a land in which you, the player, will face many, many challenges. Do not make the mistake of underestimating them, just because the lot revolves around the same concept of smashing blocks into same-colored blocks to send other blocks flying, and… chain reactions! Explosions! Petal Crash! Points! Garbage for your opponent! Wait, where was I…

Oh, right: Florea, a land divided, and yet, one where several races straight out of the wonderful fantasy realm co-exist. But while that’s undeniably groovy, what matters more are the Sacred Blossoms – seven, to be exact – as whoever manages to collect all these and return them to the Royal Garden… “will receive their heart’s true desire”.

With that much at stake, it probably goes without saying that acquiring the lot won’t be an easy task, each in the possession of an individual with “their own wish, and their own story to tell”. Which means there’s only one way to go about this mini collect-a-thon: emerge victorious in duels against each and every last blossom holder!

How? Well, slide blocks around until two of the same color smash together, at which point a small explosion is triggered and blocks next to them go flying! A simple enough concept, although I’d wager it is one that also has a fair amount of depth as chain reactions can prove absolutely devastating. When playing against someone else, that is. Petal Crash does feature mother modes, after all, such as Solo Play against the clock or a finite number of moves, Puzzle Mode, which even comes with a level creator, and of course, (local) multiplayer.

So, think you’ve got what it takes to rack up a high score?

Petal Crash is available on Steam, itch.io, Switch, and PlayStation 4.