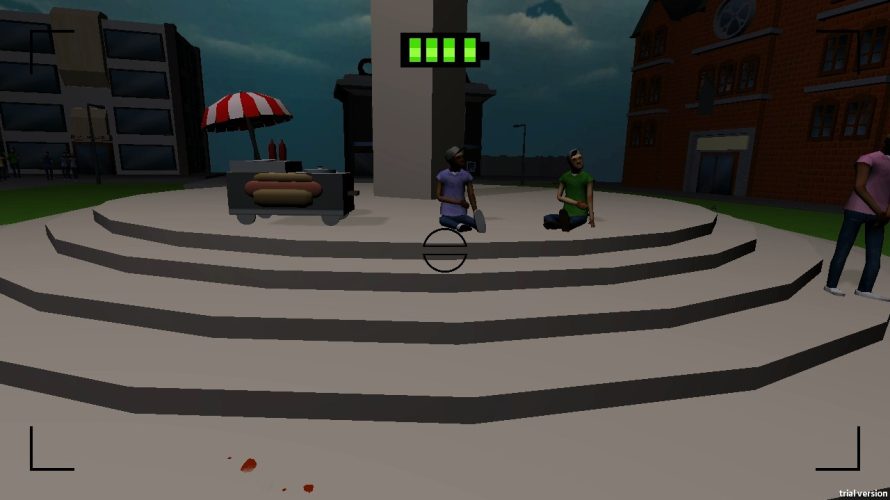 Being a reporter ain’t always easy and it’s definitely not all rainbows and unicorns. However sad and morbid, a dead body is still a potential scoop, and that’s exactly what you’ll be dealing with in Obscura. Although in an odd (or clever?) twist, you’re not even remotely bound by journalistic integrity. The truth, the story… well, it’s whatever you want it to be!

Fortunately, you’ve managed to be first on the scene. So far, so good. Now for the bad news: your camera only has enough juice for around ten minutes, meaning you’ll have to be quick to snap as many pictures as possible. While only one of them will be used for the article, as I’m sure you can imagine, it’s always better to have plenty to choose from. Would suck to end up with nothing but bad angles and blurry shots.

It may not be the largest ‘scene’, but the number of bystanders and the way they’ve been positioned still gives you plenty to work with. Once you’re ready to write, or your camera runs out of battery, all that remains is to pick a photo and share the truth with the world – your version of it, anyway. Ah, if only real-life journalism was this simple, eh?

Armed with your camera, you maneuver around the scene, looking for hints that will solve the mystery… and give you a great headline!

Team ‘Jambaars!’ (aka. Speelbars) crafted the game during the Global Game Jam 2014, and while the game doesn’t sport photorealistic (get it?) visuals, credit where credit’s due, it’s quite the clever idea and one that’s nicely executed. And who knows – maybe they’ll expand upon it post-jam? A lot of developers tend to do just that with their 72-hour creations, after all. My scoop can be seen here (warning: minor spoilers).

For now, I’d recommend grabbing the nearest camera and taking journalism for a spin in Obscura. Remember: the truth is not out there until you decide what the truth is!