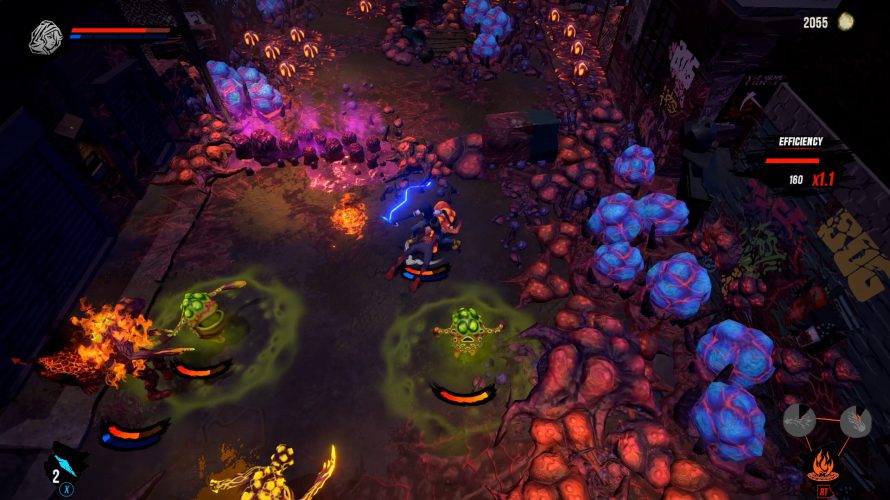 With the forces of Heaven and Hell locked in a never-ending struggle, who better than to mess with the balance than a demon and her Hellhound companion? Such is the premise for this combat-heavy tale – one overflowing with the nastiest explosive wandering corpses, bile bombs and man-eating plants you can imagine (but really shouldn’t). But is kicking you-know-what and taking names in Obey Me any fun? Well…

No. As in, there is no way I am going to answer that question this early in my review, for while I didn’t actually end up beating Obey Me (more on that in a bit), I do feel I experienced enough to form a proper opinion on the game as a whole. One that started with its action-packed pre-release trailer and promise of local co-op; so if nothing else, it was off to a good start in my books. I was almost certain the second player would be forced to play the companion – Monty – but hey, at least they got to spew fireballs, breathe fire, and what-have-you. So far, so good, right? Right.

Now, as is often the case with video games these days, Obey Me kicks things off with a semi-brief tutorial – after Monty runs off to ‘scout ahead’ that is, ensuring there shall be no co-operative action until the player has mastered the basics and laid waste to a few enemies. You know, the usual stuff: light attacks, heavy attacks, a dash move, a more complex attack or two… and you’re good to go. At which point Monty joins you and co-op mode can be enabled. 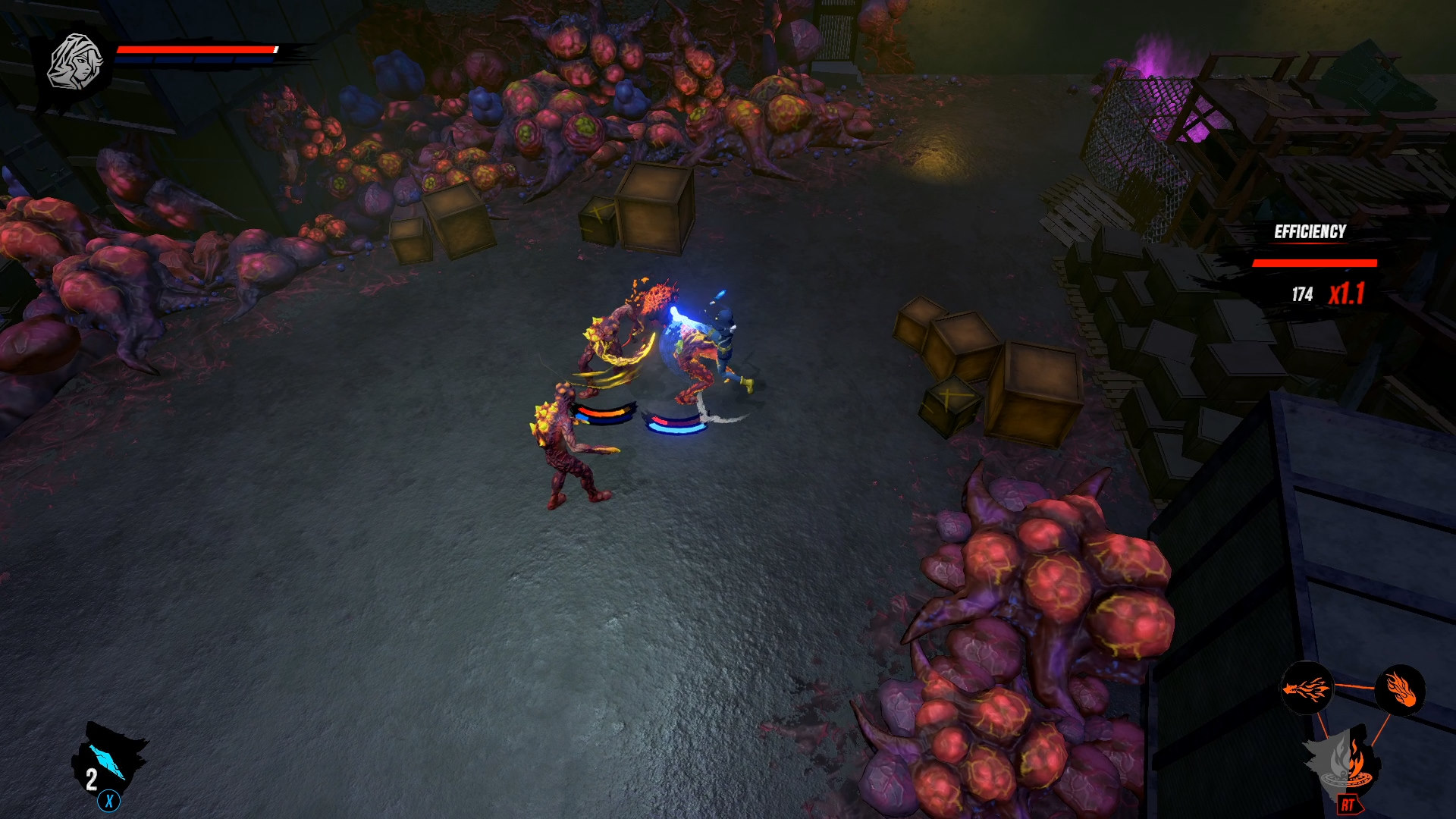 In my experience, bringing a friend along for the ride is definitely a good idea as having the game control Monty doesn’t really result in the best use of his skill set. Much like Vanessa, he’s got a light and a heavy attack, a dash move, and a ranged attack, essentially doubling the damage capabilities of this dynamic duo. Although if that was all he brought to the table, it would quite frankly make no difference who was player 1 and 2, save for the fact that player 2 is unable to wander too far away from player 1 (gotta love that rubber band teleport).

Fortunately, a move set that somewhat mirrors Vanessa’s is not all Monty brings to the table as a ‘co-op move’ is available, one capable of briefly stunning an enemy – something that definitely comes in handy during certain encounters as there are enemies who’ll take a beating and just walk it off. Which brings me to one of the things I did not much care for while playing Obey Me: combat takes much longer than it should, and I wasn’t even playing on the highest difficulty or doing a rubbish job at frequently landing a hit.

No, the problem is that fighting feels slow. Incredibly slow, in fact, and to make matters worse, the ones you are able to spam without a care in the world only serve to chip away at an enemy’s health bar. Oh, and most of the time you’ll be dealing with over half a dozen enemies at the same time, dodging, stabbing and flinging knives (or spewing fireballs, as Monty) on a murderous rampage, just to stay alive. I was hoping would this be a recipe for a good time, but the aforementioned slow pace made fighting more akin to a chore. And no one likes doing those.

That’s not to say there isn’t any variety to be found, because courtesy of a multi-tiered skill tree for both Vanessa and Monty, additional attacks become available over time – including some that, for example, will provide the player with a bit of breathing room by sending nearby enemies flying. There are also a variety of different weapons for Vanessa, each with a different range, attack speed, perhaps even one with the ability to summon blood-thirsty minions.

Or how about something even crazier, like… fusing the two protagonists temporarily for some health regen and a damage boost? Yup. Totally a thing, once enough spirit dust has been acquired (which comes from ‘overloading’ enemies with Monty once Vanessa has slapped them around for a good bit). Given the length of some encounters, even early on, you’ll want to make the most of this as health pickups and checkpoints aren’t as common as I would have liked. This would have been less of an issue, had Obey Me provided me with a more stable experience instead of randomly crashing during cut-scenes.

In case you’re wondering why I only mentioned the game’s plot briefly at the beginning of this review and never since, well, during my time spent playing it seemed as if the entire thing was something akin to 70% combat, 20% running between encounters, and 10% plot progression. Then again, that could very well be intentional. We are dealing with a demonic brawler here and a gripping plot would likely simply get lost amid the carnage anyway. So I’m gonna go with that and move onto something else: why I am writing this review even though I have yet to finish the game. 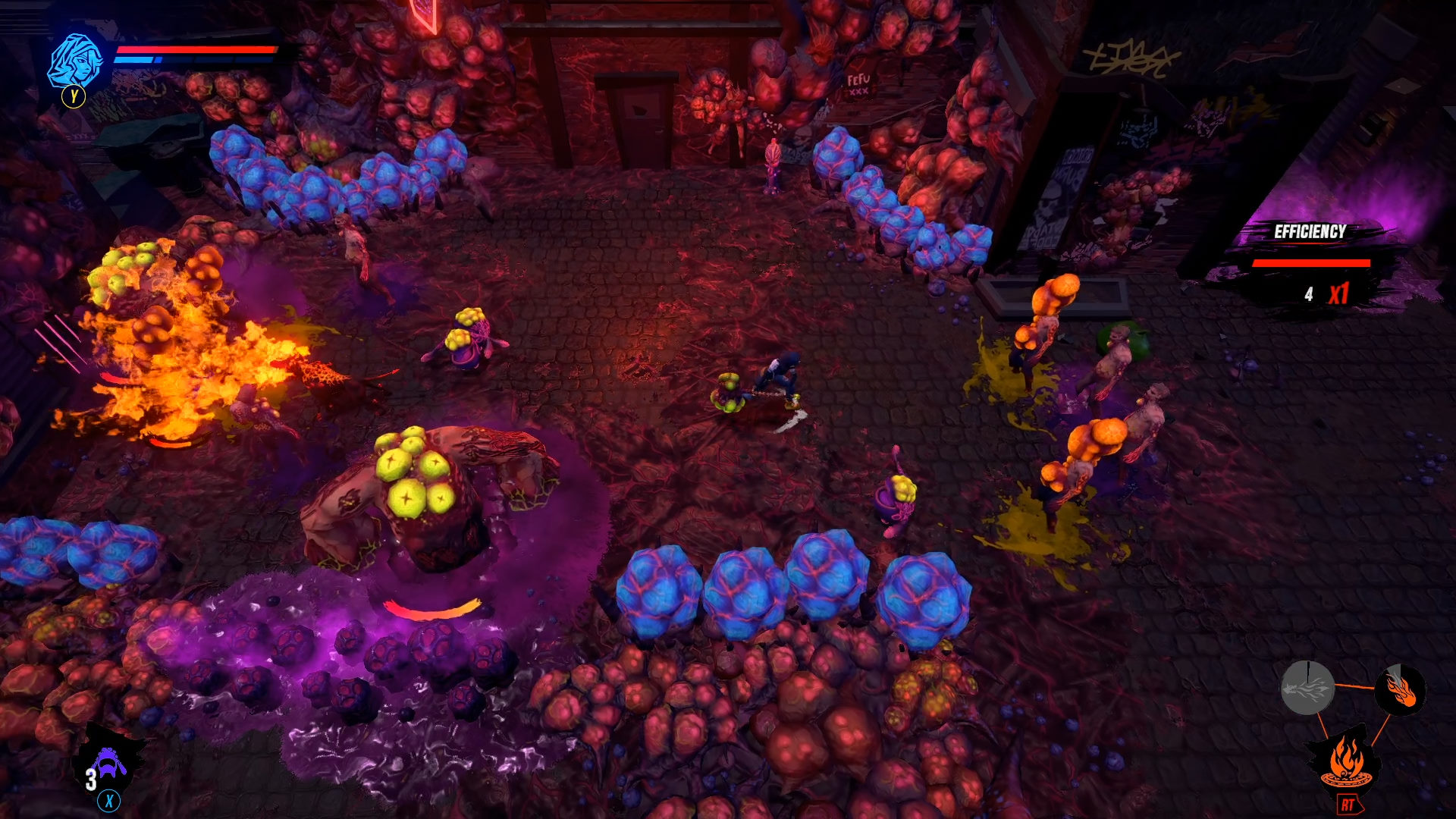 So, in case you couldn’t tell at this point, I wasn’t exactly having the time of my life, playing Obey Me. Darn shame too, because even though I could see the potential for fun in all the hacking, slashing, slicing and dicing… for me, the fun factor was just much too low. The slow pace coupled with far too durable enemies/lengthy encounters – which restrict you to a small arena, I might add – were not even remotely my cup of tea. I wanted it to be, based on the trailer (embedded at the end of this review) as I do enjoy kicking you-know-what and taking names in games like this. But alas, sometimes there’s just this frustrating disconnect between what you’re presented with and what you actually end up experiencing once you get to play. This was one of those times for me.

As such, much as it annoys me to review a game unfinished, hopefully, it has been made clear why I chose to do so with this one.

Obey Me is available on Steam, PlayStation 4, Xbox One, with a Switch version due later this year.