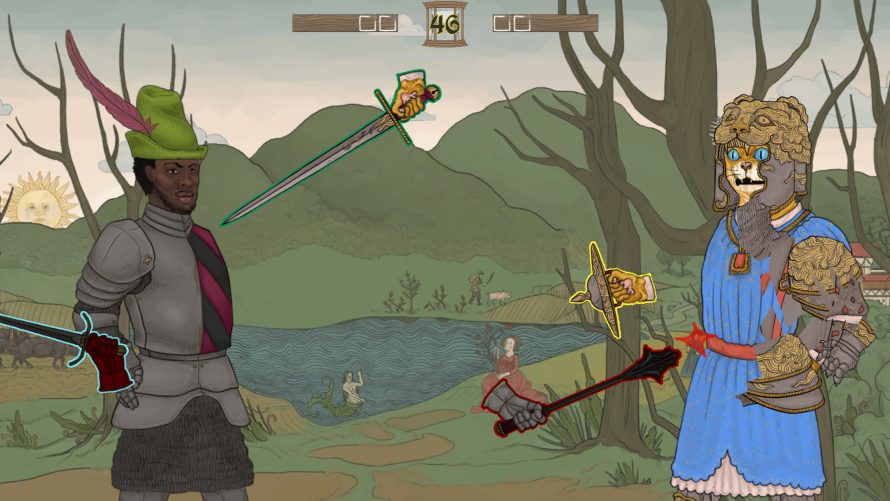 Sword-based dueling has already made quite a splash in video game form thanks to the likes of Nidhogg, no doubt about that. But for all its absolute awesomeness, that take on the genre was… well, for the most part of the serious variety. Kinda. Maybe a little bit. That’s definitely not the case with Riposte!. In this game, players are placed in control of weapons rather than characters, and something tells me that change alone will make for an absolutely glorious time. Stabby-stabby?

That said, while by no means a realistic approach to dueling, sword-and-board (sword and shield, in plain English) is still very much the name of the game here, meaning… each bout is actually a 2v2 affair. I know, it’s absolute madness. Madness. Madness, I tell ya! Ahem. Anyway, one player controls the weapon, the other, the shield -- stabbing, hacking and slashing (or rather, crazy flailing about) follows until only one team is left standing. Or you could fire up a round of free-for-all in which, well, four players… wield nothing but a weapon each. And remember, to the victor go the spoils.

If you’re a sword… prepare to stab or be stabbed.

Whether or not said spoils are in fact real remains to be seen. If they aren’t, you’ll just have to make something up as you -- and a crew of friends/enemies -- make your way through the double-elimination tournament brackets, as well as a slew of silly minigames. Who said fencing/dueling/whatever this actually is had to be so darn serious and, you know, skill-based? Meh. The fun factor is so much more important! Look at the trailer below and tell me I’m wrong.

Riposte! will be available on Steam this spring.