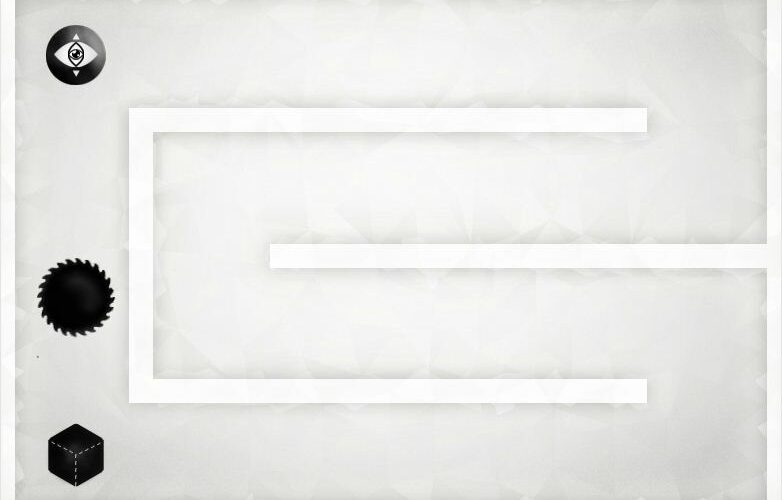 Most games tend to start with some boring tutorial or at the very least, a brief moment in which the core mechanics are explained; especially when new mechanics are introduced. Not so with this one. Here, you’re entirely on your own, and guess what? This game makes a habit out of changing the rules between each level, so prepare to leave your comfort zone and enter 3LIND.

Am I the only one who feels that there should be a lot more games that truly mess with the player’s mind? Not the kind that terrifies ya to the point where pants are suddenly wet, mind. I’m referring to games like this one and of course, Antichamber. While there are genres I enjoy more than ‘puzzle’, as long as it doesn’t degrade to box pushing, levers/switches that run on a timer or other silly nonsense, I’m usually up for it, and this was without a doubt one of the most interesting puzzle games I’d played in a long time.

All levels are unique and have some idea and philosophical thought.

You play as a rather odd-looking eyeball, able to move in any and all directions at the push of a button. Simple enough so far. Although even with the goal in each level is to ‘gobble up the big black box’, exactly how you get there varies quite a bit. I’m not gonna go into detail about it here though, as that would spoil the fun that comes from experiencing it all for the first time (which is quite a big deal here). Instead, I’m gonna give you the tried and true ‘not everything is quite as it seems’, and let you take on the 20 levels sight unseen. Trust me, it’s more fun that way.

Suffice to say, some – if not all – levels defy logic to a certain extent, forcing you to think outside the box (see what I did there?) to make it through in one piece. Also, those hints you’re given between levels? Yeah, don’t ignore them. If you do, 3LIND might all too easily end up a trial-and-error based affair, and that’s neither fun nor how I imagine Sergey Gerasimenko would want you to experience his creation. So pay attention, put some headphones on and lose yourself in a world where nothing is certain… until you’ve tried it.