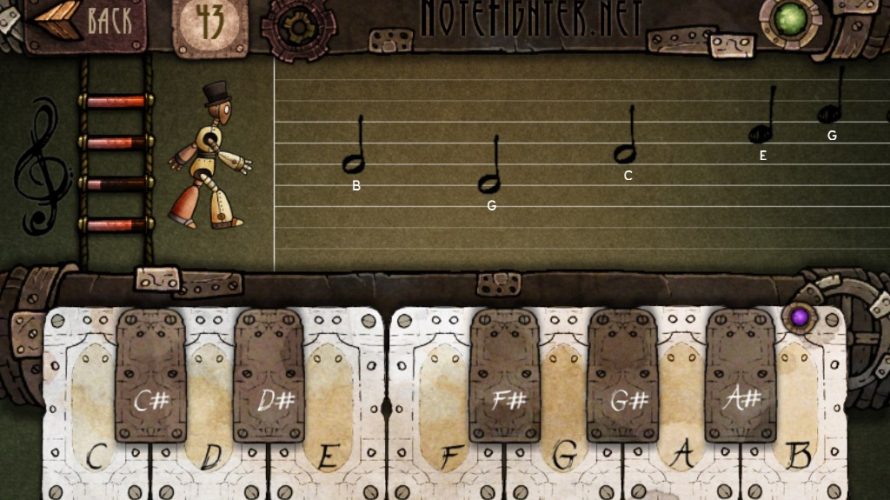 On paper, defending a robot against incoming notes may sound rather dull, but in this case, it most certainly isn’t. Doesn’t matter if you’re playing Jingle Bell, Ode to Joy, Für Elise or any of the other tracks featured in Note Fighter, as this particular setup makes them equally fun to play. Oh, and they sound good too… provided you don’t play off-key!

Now, needless to say, the piano used here isn’t quite like the real deal. There are fewer keys to keep track of and, well, an obvious lack of tactile feedback, being on a touch-screen and all. Neither takes away from the entertainment value though. Tapping the right key as it’s about to hit the robot, defending the poor thing from total annihilation, can be quite amusing; once you’ve learned what’s what and what’s where that is.

Managing C through B (CDEFGAB, in that order) isn’t overly complex, but there are also the ‘in-betweens’, C#, D#, F#, G#, and A#, to keep track of. Fortunately, it seems the developer of Note Fighter is well-aware that not everyone has the time – or interest – in learning the more advanced techniques, as three rather different difficulty settings have been included. 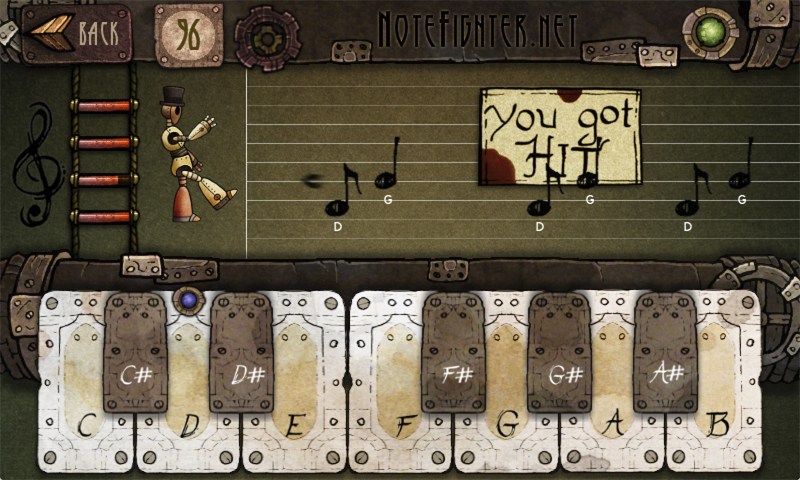 Those seeking some relaxing instrumental fun can enjoy the game on easy, where for the most part, only the main keys are used, while medium ups the ante by using the ‘in-betweens’ more frequently, and hard… is where things get interesting. On hard difficulty, keys are no longer displayed on each note, leaving players to figure that part out on their own – on top of featuring a noticeably faster pace. Great for those looking to really test their skills, no doubt.

As far as the actual tunes go, I’d say the selection is spot-on for rockin’ out on a piano: Jingle Bells, Auld Lang Syne, Ode to Joy, Pachelbel’s Canon, Moonlight Sonata, Für Elise, Johnny I Hardly Knew Ye, Eine kleine Nachtmusik, and last but not least, Symphony No. 40. Don’t know about you, but I’d be fine playing the likes of Canon and Für Elise all day in this game, ya know? I’m pretty terrible at both, although that’s besides the point.

Anyway, one thing that did annoy me ever so slightly, was the length of each track, as they seem to last less than a minute; including Johnny I Hardly New Ye, which spans a grand total of 120(!) notes (Jingle Bells has 49, by comparison). Likely due to the game being on mobile devices, size restriction, or both. Still a tad disappointing though, whatever the reason. 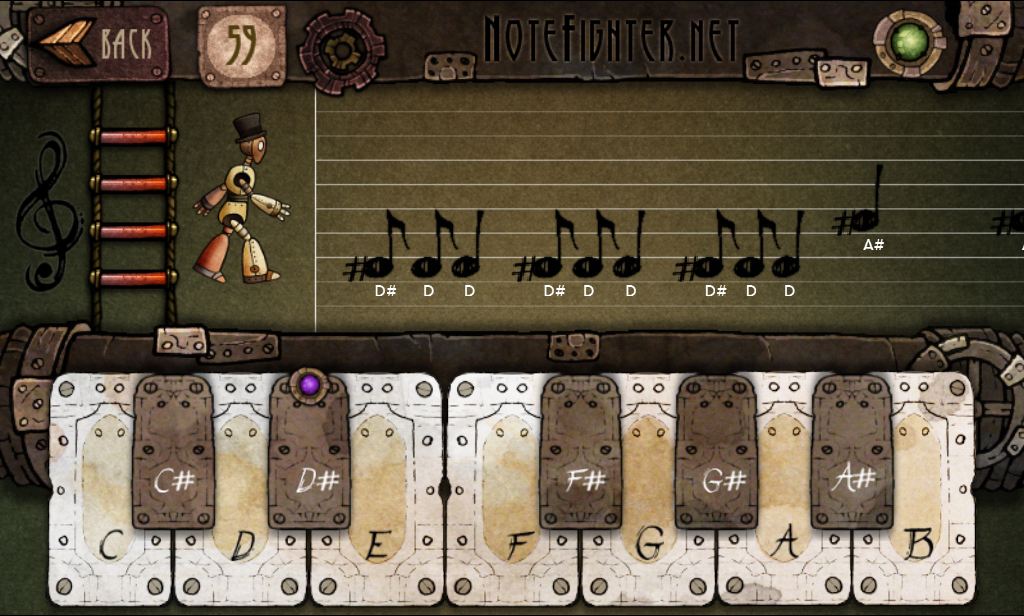 Oh and speaking of notes: each missed results in that lovely steampunk-ish robot taking a hit, draining whichever health bar the note in question was on. For certain songs/difficulty combinations, this does give the player slightly more breathing room, as notes will – for the most part – be spread out across several keys. Unless you’re playing Symphony No. 40, as shown above, of course… and that screenshot was taken on easy. Miss all those, and a ‘game over’ won’t be far behind.

So, aside from the short duration of each track, I’m having a hard time finding fault with Note Fighter. It does exactly what it sets out to do, which is to provide the player with brief sessions of piano fun, without the steep learning curve (or cost) of playing the real thing. But why take my word for it when you can pick it up right now, provided your favorite mobile device runs either iOS or Android? It’s time to show the world your pianist skills!

Note Fighter is available for $1.99 on iOS (iTunes) and Android (premium – ad-based).