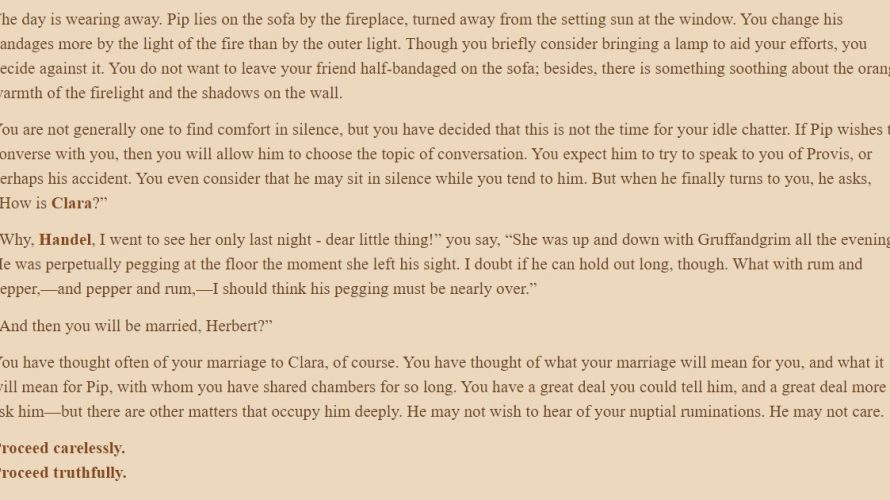 Great Expectations. While I am familiar with some works of Charles Dickens, in spite of a critically acclaimed story, that one is not among them. As such, whether “My dear Handel”: A “Great Expectations” Simulator works just fine without familiarity with the aforementioned classic, I do not know. More importantly, did it make for an enjoyable piece of interactive fiction revolving around ‘being a gay character in a 19th century British novel’? Well…

…yeah, like I’d actually open with a verdict on the game! Seriously though, this brief Twine creation actually has a lot to say, as told from the viewpoint of Herbert Pocket, best friend of Pip Pirrip, whose wounds you tend to one evening while discussing… many topics. Eventually, the future is brought up, but let’s stay in the present for now, with dips into the past, however brief.

Now, some may prefer to have their wounded arm dressed in silence, even if a close friend is the one helping them out, but since both Herbert and Pip have a lot on their mind, perhaps a time such as this is perfect for a little chat. One which is directed by you, the reader/player, and with multiple endings, you better believe that choices are going to matter well beyond the moment-to-moment conversational topics.

It quickly becomes apparent that the two have a long history, and that life hasn’t exactly been perfect for either of them, but is all that in the past or will it affect the future too? While the wrong words might steer things in an awkward, perhaps even unpleasant direction, sometimes that’s a risk we’ll just have to take. That goes for the opposite too, as good intentions are not always interpreted as that. Human beings are complicated creatures, after all, and these two are no different.

Only the past is set in stone, the present is constantly in motion, and the future has yet to be written. So how about shaping it in “My dear Handel”: A “Great Expectations” Simulator, one choice at a time?