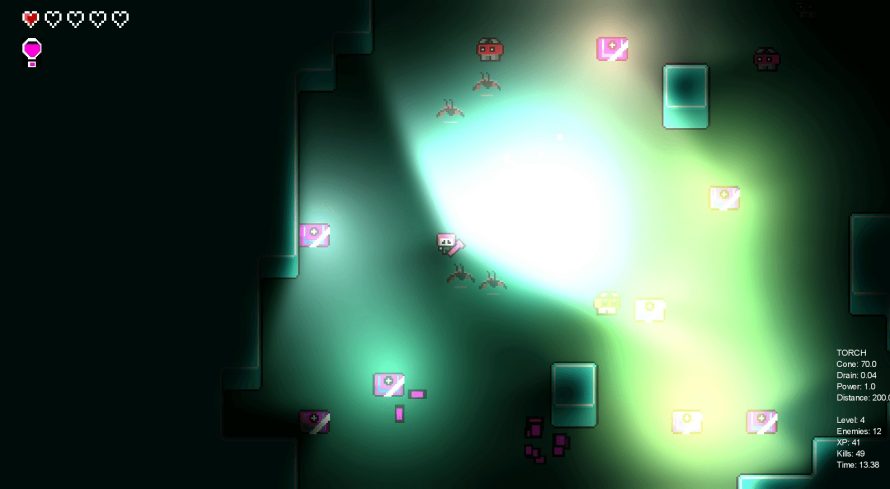 Most of us have fought on demons and ghastly ghouls in one video game or another at this point, and whether we survived the encounter or not, it was (probably) a glorious battle. But few have we taken on the hounds of hell, armed with a meager flashlight, which is the exact conundrum Lanny, the protagonist in Light of the Living Dead, is facing! Oh, and her weapon of choice is about to run out of batteries…

On the bright side (get it?), each level – while randomly generated – will contain several locations with charge kits. Or maybe just one, with several kits? You never know, random being random and all. One thing is however certain: at some point, the odds, which are constantly stacked against poor Lanny, will prove too much. Death is inevitable here, but that doesn’t mean you shouldn’t go down fighting.

In fact, that’s exactly what you should! After all, defeating every last enemy not only takes you to the next level, it also lets you upgrade your flashlight, tilting the odds ever so slightly in your favor. Additional battery power (charge), extended reach (reach), a stronger light (damage) or a larger beam width (cone) – those are your choices. As for which is better, I’d go with cone, charge, and damage in that order, after which… well, not like most will live that long anyway; I never did.

Then again, maybe you’ll fare better? Don’t let the unnerving noises get to ya, keep a steady aim, run like hell, and you might even be able to escape. If not for the fact that Light of the Living Dead, which came to be during Ludum Dare 32, didn’t contain an infinite number of rooms, that is. Tough break for Lanny, but like I said: the power of light is on your side, so be sure to go down fighting!