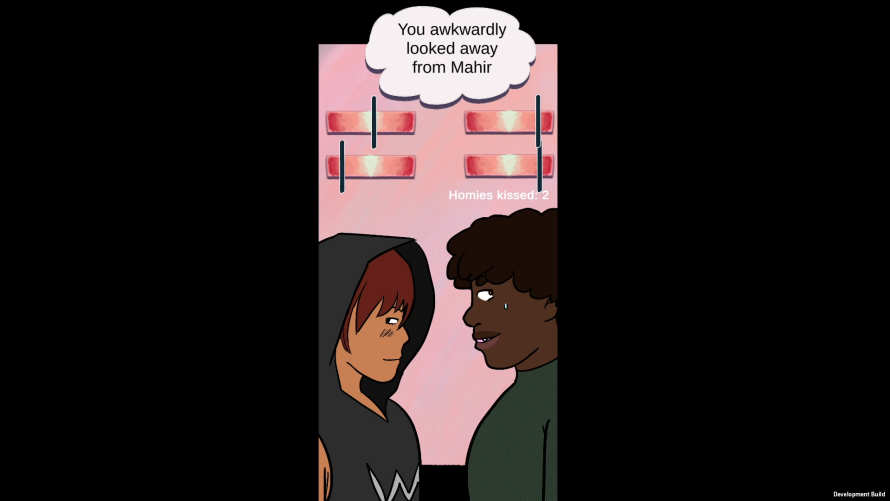 Oh my. A lot of lip-locking happening in this one, both successful and… well, not every kiss is going to hit its mark. But when your focus is on Kissing Your Homies Goodnight and you have to deal with a semi-rhythm game in order to really get up close for an end-of-the-day smooch? Yeah, that’s when said activity becomes not only challenging but also about racking up points (wait, what?).

So, first things first – what’s the deal with those bars above the heads of both characters? Simply put, it’s all about the spacebar! As in, you have to intimidate each homie to end their (and your) evening on a high note, which is done by pressing and holding the spacebar when the line in the top bar is close to the middle. Then once the line in the second bar reaches that same spot, let go of the key and, with a little luck, smooching will commence.

Ah right, just to clarify: ‘intimidation’ in this context does not mean anything downright evil or nasty, so much as harmless behavior triggers; a nervous blush by way of a flirty wink, for example. Basically, getting them to lower their guard so you can move in for the, well, kiss. Gotta be quick about it too because if they end up tearing down your defenses first, you can kiss (no pun intended) that ‘Homies kissed’ high score goodbye.

To keep that one going you’ll have to consecutively be the first to smooch, over and over again. One moment of weakness and it’s back to zero. Fortunately, it does sound more difficult than it is, and you’ll quickly get into the swing of things, Kissing Your Homies Goodnight left and right! No better time than the present.

Kissing Your Homies Goodnight is available on itch.io, for free.

Facebook Twitter LinkedIn Pinterest Tumblr WhatsApp Telegram E-mail
Previous article Repair a World About to Collapse in Gorgeous Puzzler 'Minute of Islands'
Next article Life From Child to Adult is Shaped by the Choices You Make in Visual Novel 'Our Life: Now & Forever'