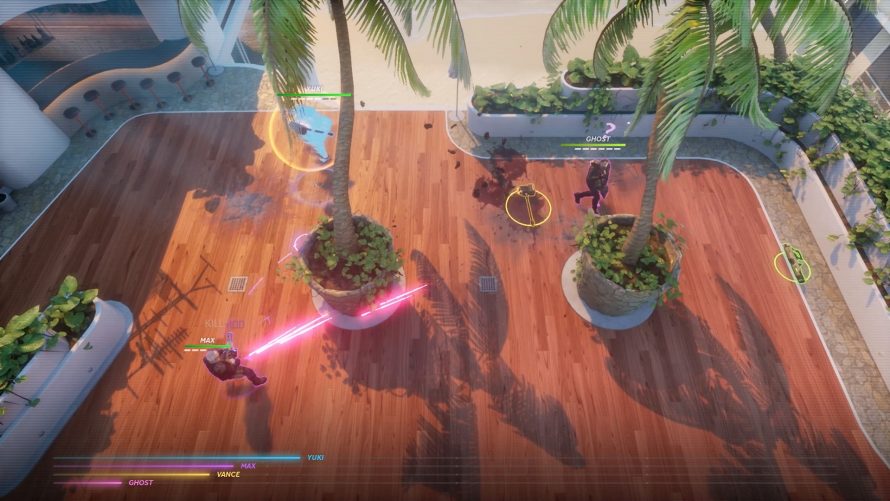 It’s been a while since I had a chance to get down and dirty with a PvP-focused indie title, so when Hyper Jam appeared on my radar, I jumped at the chance to fight… all the way back to the neon-bathed, synthwave past. As such, I hereby welcome you to the deadliest sport of the ’80s (or my review of said carnage, anyway).

Unlike other PvP brawlers out there, such as Bloodline Champions, is a pretty simplistic affair: up to four contestants enter, armed with a dash move on a cooldown, the ability to deflect attacks, and whatever weapon they’re able to pick up in the arena (which all have a finite number of uses). Oh right, there are perks too – but not until after that ever-important first round. So pray you make it to your weapon of choice, whether it be the rocket launcher, katana, grenade launcher, bow, and arrow or the almighty sledgehammer because you’re likely going to need it.

Doubly so if you’re anything like me, terrible reflexes and much too slow at reading incoming attacks, unable to time a deflect properly more often than not. Didn’t stop me from having fun though, even if I soon realized that I was out of my element. Could just be my age and/or a lack of experience with such fast-paced affairs is starting to show. Hard to say, for while I initially struggled to gain any kind of advantage over AI opponents on ‘easy’ (easy, medium, hard, expert) difficulty, half an hour later I was able to somewhat hold my ground against expert bots. 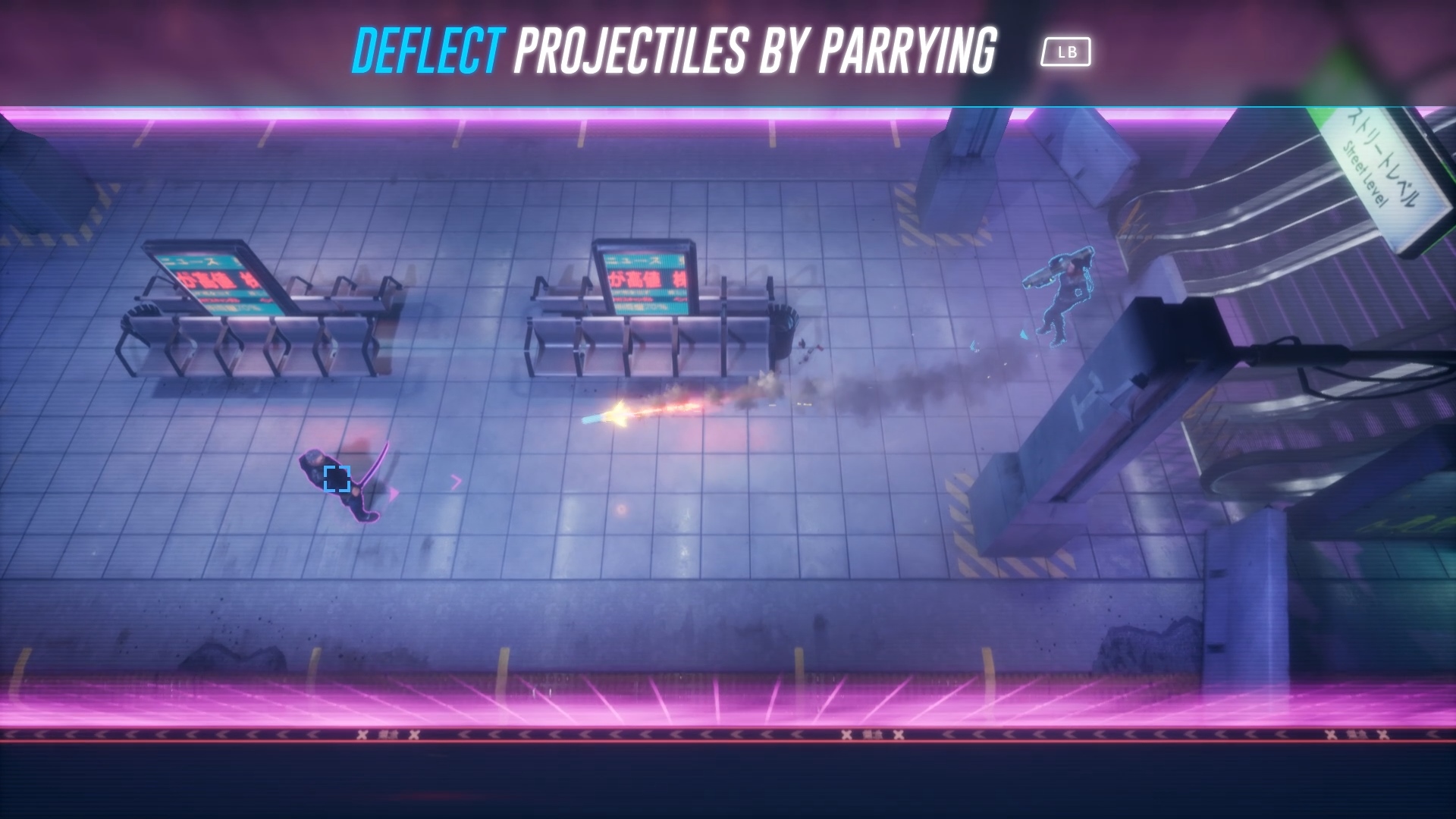 While I would make the claim that Hyper Jam is easy enough to pick up and play, the entirely optional tutorial is probably not something you should skip, unless you fancy learning-by-doing, more than likely getting completely destroyed in the process. Dashing around, picking up weapons, throwing them, aiming, charging attacks, perks – and so on – all work best after a bit of an introduction after all. Especially once you decide to engage in combat with actual opponents, as I’d wager properly skilled humans will provide a greater challenge than the most brutal AI.

So… let’s talk perks, eh? These are after all one of the things that set Hyper Jam apart from other genre entries, and while I am not a fan of every last one, the way players acquire these is something I do like. After each round, players get to pick from between two and four of these (determined by the number of players in the match), drawn randomly from a pool of fifteen… and this is where that first round comes into play. See, whoever is behind when the score is tallied after each round gets first pick of perks, followed by whoever is ahead of them, and so on until all have been picked. A nice little system that, in theory, helps even the odds for that poor guy/girl trailing behind everyone else. In theory. 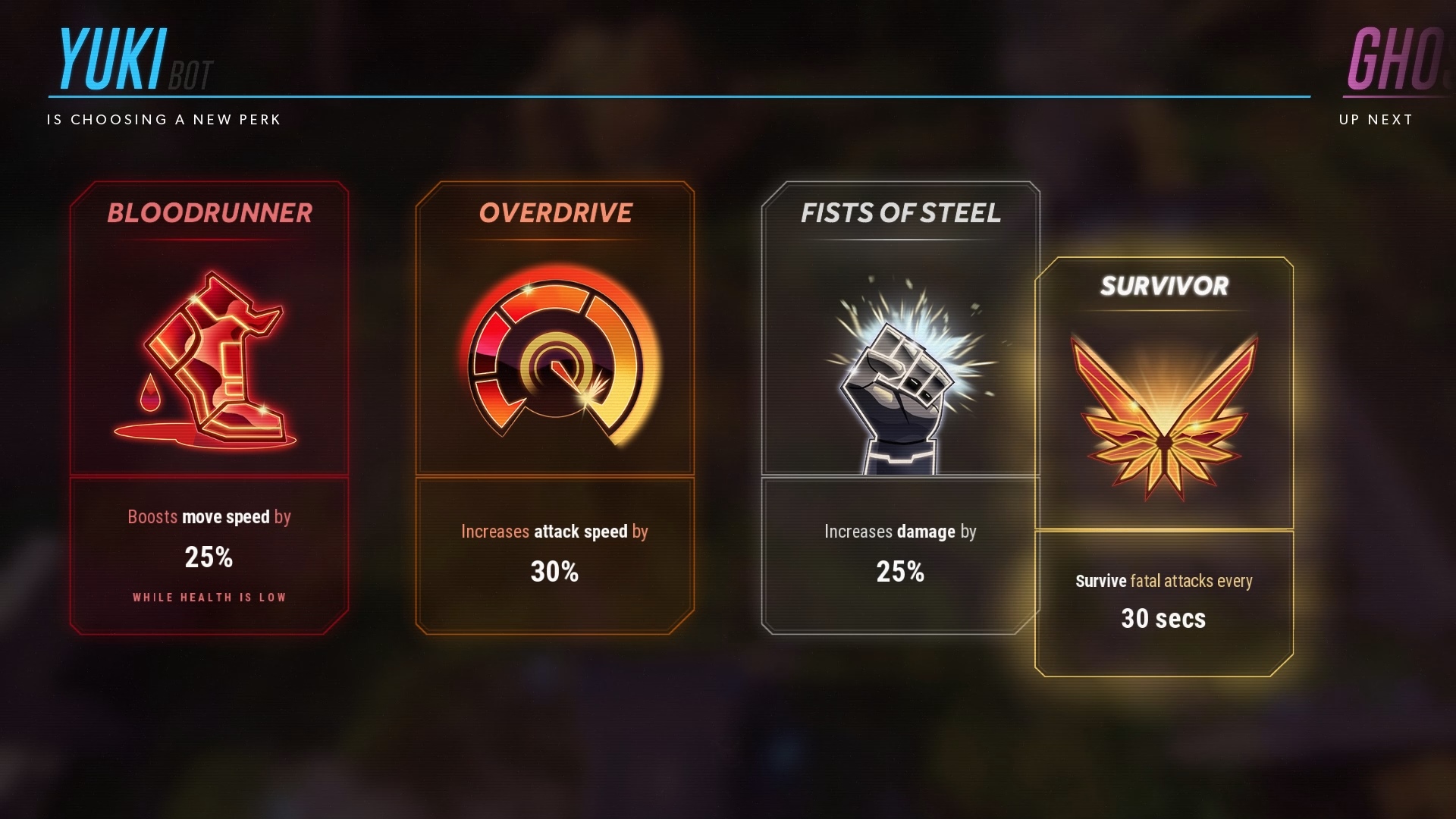 In practice, a bit of luck is also required, as you could easily have first pick with nothing super useful available. Or it could go the other way, the likes of Cyber Heart (health regen), Vampirism (health leech) or the, in my experience, almighty Mind Crush (confusion debuff applied upon landing an attack) popping up. I’d wager that last one is particularly troublesome against other players, seeing how having your movement controls inverted for a couple of seconds is not something most are able to deal with in the heat of battle, more than likely ending up wandering outside the battlefield; or becoming an easy target.

Now, while having your health drained does eliminate you from the current round, dead contestants are actually still able to participate to some extent: once you’re out, it’s time to play a different role – one involving launching orbital nukes onto the arena, hopefully hitting one or more targets in the process! If nothing else, it gives those who fell early an opportunity to still ensure that/those who have reached the score limit doesn’t survive the round. Because then they’d end up winning, and we can’t have that, now can we?

Which brings me to points, and boy are these ever plentiful, so you may want to set the limit a bit higher than the default (1500) for private matches; unless you only have time for a quick bout, in which case, going as low as 500 might actually be the better option. Personally, I prefer lengthy battles (5000) as these tend to allow for a crazy number of perks in the pockets of each contestant, turning the whole thing into a bit of an RPG. Kinda. Points are doled out for all kinds of things after all, including landing the killing blow on someone, being the last one standing, and of course, dealing damage. But they are not XP. Those are handed out at the end of a match, and as far as I can tell, serve only to unlock cosmetics. 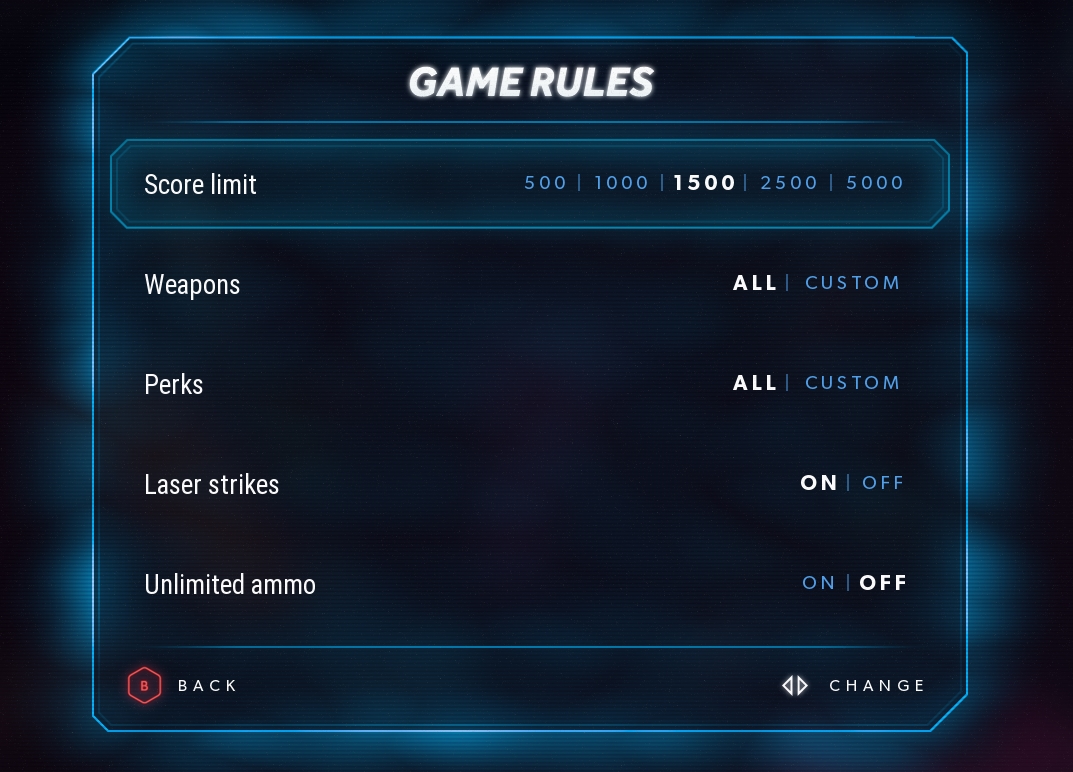 Anyway, on the topic of customization… Hyper Jam actually surprised me a bit in how much match settings can be adjusted, allowing players to tweak everything from score limit to which weapons and perks are available, even going as far as to enable/disable laser strikes (the post-mortem nukes) and unlimited ammo. Impressive. Stuff like that is definitely going to help the game build a competitive scene. At least, I’m hoping that’ll happen, because the groundwork has certainly been laid for one such. But as always, it depends on the community as well as of course how the developer handles the game post-launch.

Not thereby saying that the game is in dire need of something or other. Quite the opposite in fact, as the build I played for this here review worked flawlessly; solid performance across the board and no glitches or other anomalies. Plenty features too, including the inclusion of an ever-lovely ‘sudden death’ trigger which helps ensure battles will end at some point – by shrinking the playable area little by little, once enough time has passed without a victor. This actually helped me survive a rather deadly duel at one point, since the ‘outside’ area is quite deadly to anyone moving through it, so while some may not fancy that battle royale inspired little thing, I’m all for it.

Same goes for the balancing of perks. Save for the aforementioned Mind Crush, which made me groan in agony whenever someone else grabbed it before me, the entire lot felt proper useful; even more so when more than one of the same was picked up, as this boosted the effectiveness of, well, whatever said perk did (more health regenerated, higher damage increase, etc.). And as I mentioned earlier, in private matches, the host is able to choose which to include and which to remove from the pool entirely. Absolutely brilliant. 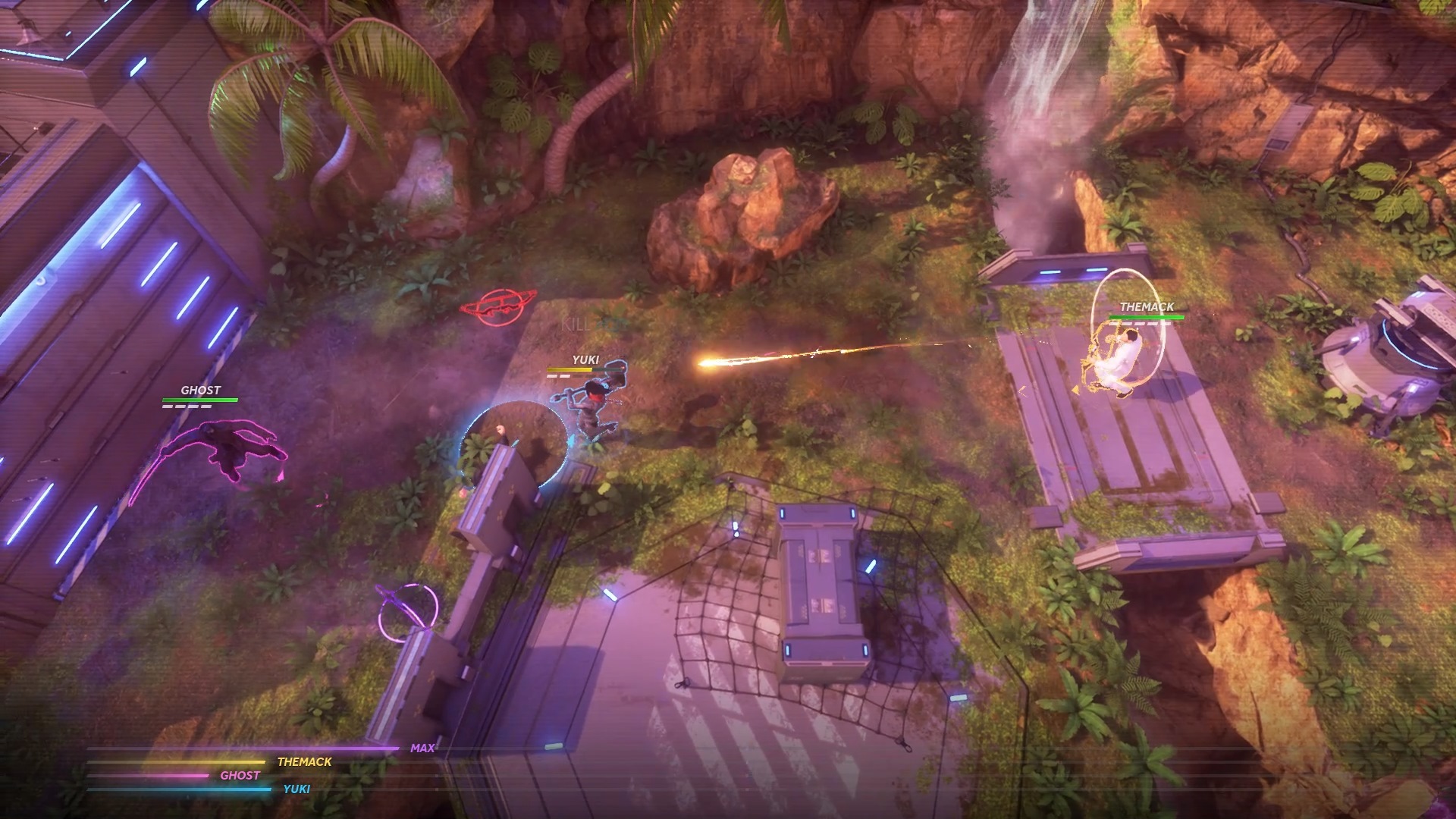 That is also how I’d describe both the overall experience and the PC version: absolutely brilliant. Not just in terms of gameplay either, the technical side of things also shining quite brightly, every single option one could want readily available. Heck, for whatever reason, the FPS limit can be set as high as 300 (wait, what?) and… well, anti-aliasing is the only odd one of the bunch, really. “Low | Medium | High | Epic” works fine for ‘visual effects’, ‘shadow quality’ and such, but in 2019 PC gamers tend to know their FXAA from TLAA, MLAA and whatever else exists in the realm of anti-aliasing. But that’s a minor nitpick in a title such as this that plays from a zoomed-out top-down perspective.

All in all, Hyper Jam has a lot of potential, as there is plenty fun to be had, whether it be against AI-controlled opponents, with friends in private matches or against total strangers, courtesy of cross-platform (Windows vs. Xbox One vs. PlayStation 4) matchmaking. Just remember to tweak the settings and adjust the availability of perk and weapon alike before you brawl with friends, so everyone’s having a good time. Now if you’ll excuse me… I do believe there’s a match waiting to start somewhere, and I’ll be damned if I miss out!

Hyper Jam is available on Steam, Xbox One and PlayStation 4.