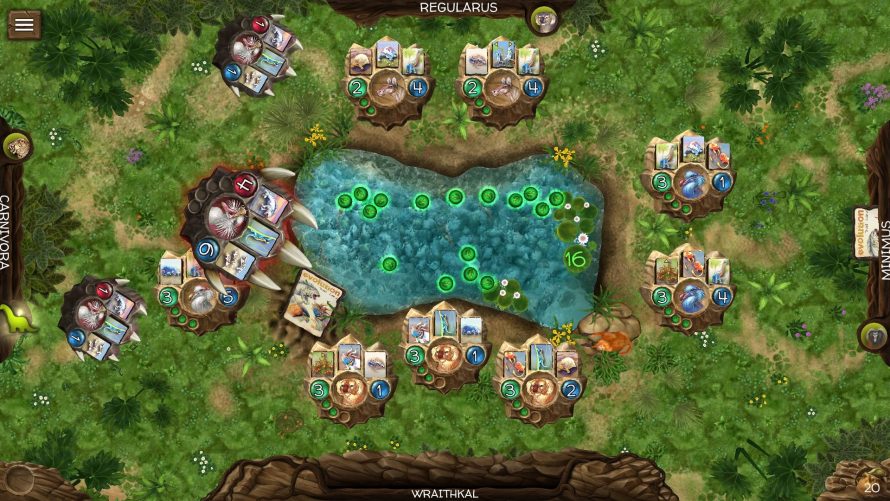 It all began with a deck of cards and two players. Both were herbivores… until suddenly, one wasn’t. At this point things got a bit dicey, animals suddenly went extinct, the watering hole dried up and/or ran out of food. Actually, I’m not entirely clear on the chain of events that followed, as I was much too busy accusing my opponent in Evolution: The Video Game of cheating. Why? He was winning, that’s why!

On a more serious note, Evolution: The Video Game did something very few games on my review list have managed in recent years: it made me want to beat the campaign so I could write what you’re reading right now… and play some more. That’s how good this game is, and like any good multiplayer-centric card game, there’s a more than competent AI with not only several difficulty levels but also actual personas (read: different behavior). While I’m hardly the most experienced Evolution (the board game upon which this is based) player, I’d like to think I know what defines quality gaming, and the handful of hours spent around the virtual water hole here certainly provided that; even if I did get absolutely destroyed late-game. But let’s take it from the top, as I’m sure there are those out there who – like me – have never even heard about Evolution before. 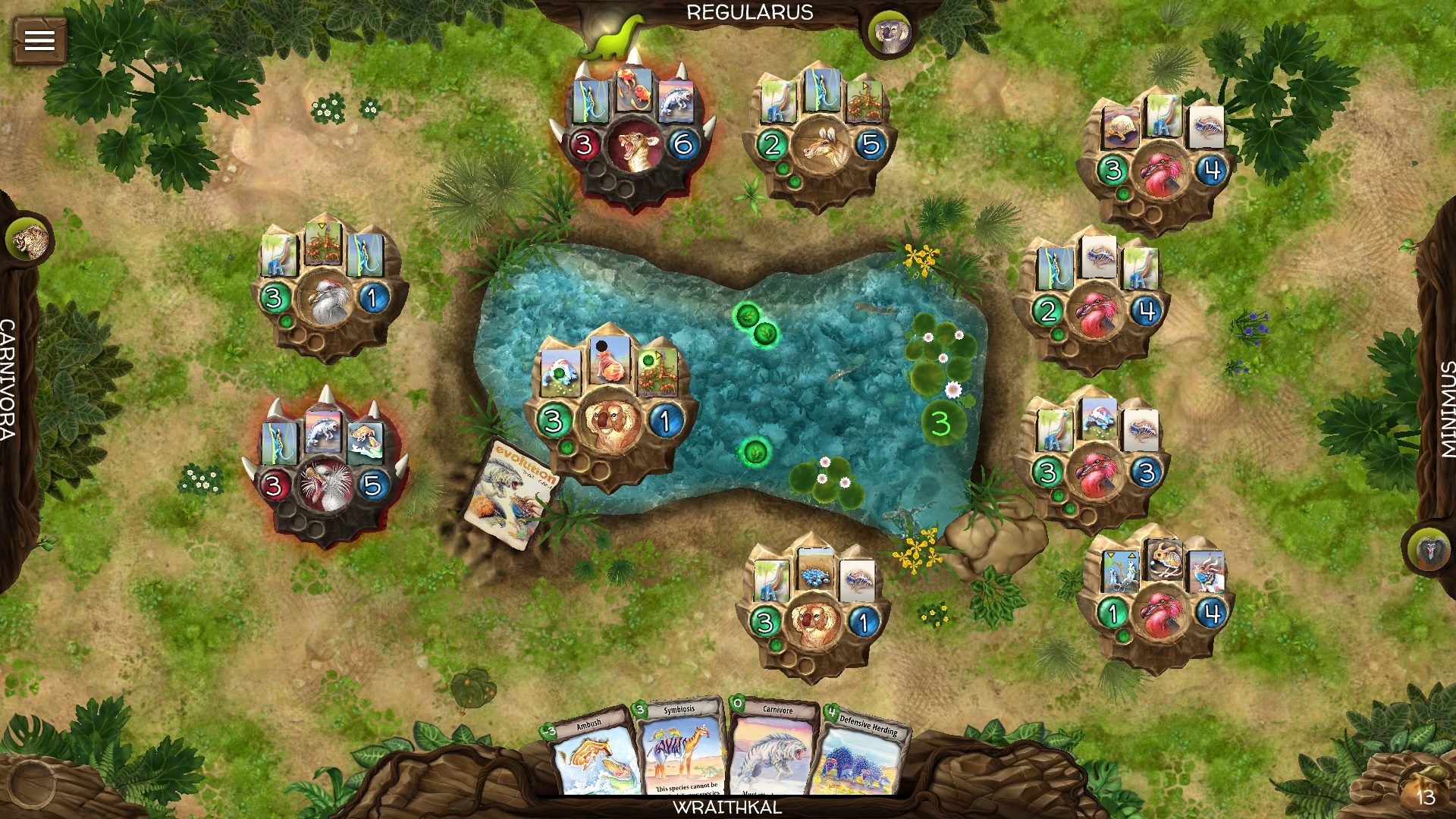 First up: food! Much like in the real world, food plays a vital role in Evolution: The Video Game, for without it, extinction is guaranteed. Literally. There is no way to stay alive if you don’t eat, so best make sure your species gets fed if you want to rack up those sweet population points after every round. Oh and since everyone in this chaotic chow-down for up to four people has to sink their teeth into food from the same pool, well, might not be a terrible idea to utilize traits that help ensure full stomachs all around. Just saying. Could also turn carnivore and become a vicious predator instead, surviving at the expense of another spec – actually, why don’t I just refer to them as ‘creatures’ (the round portraits) from this point onwards? Or perhaps it’d make more sense to explain the rules? Well, couldn’t hurt.

So, to win, you’ll need to rack up the most points, which will be determined through several means: the amount of food consumed overall, as well as population and traits after the final round. Easy enough to manage, because… the game does that for ya. I imagine the physical version of Evolution: The Video Game plays noticeably slower because of all the calculations after each round, which certainly gives this adaptation an advantage for those with less time. But you don’t get the same atmosphere from a video game as you do when grouped around a table, nor do you get to watch the reaction of other players as they cringe upon seeing you evolve everything, ruining their perfect plan. Unless you’ve all hooked up webcams that is.

Anyway, back to the rules, for while simple, it can take a few rounds before everyone’s familiar with the inner workings of food, traits, evolution(s), and of course, Body/Population Size. Quite a few things to keep track of, and honestly, I was a bit overwhelmed at first. Fortunately, the entire ‘campaign’ acts as a lengthy tutorial, serving up a proper great introduction to every single aspect, one match at a time, making the entire thing significantly more accessible than, you know, having to read the manual instead. 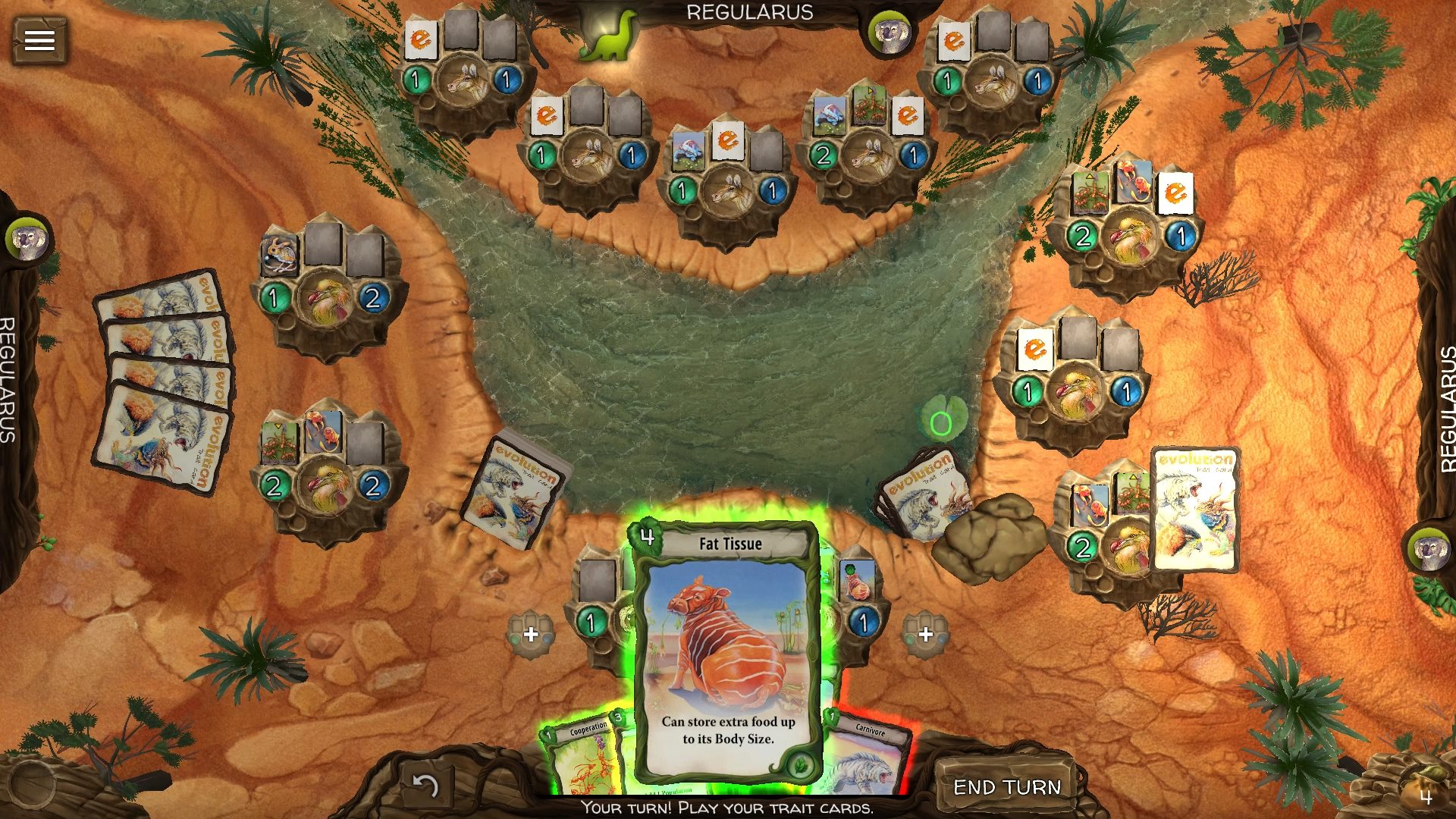 Which brings me to the next topic: traits! These come from the cards in each player’s hand, each creature benefitting from up to three at a time, and you’re even allowed to replace old with new, should the need for different tactics arise. Seeing how there’s no way to know which cards other players hold on their hand, or what they’re planning, chances are you will need to mix things up at some point, overwriting old traits with new ones, maybe even evolving a creature or two for a quick snack.

But first, those darn traits. You’ll want to keep a keen eye on exactly which of these have been put on creatures controlled by your opponents, as certain cards can be genuine game-changers if used properly. Let’s use the first one introduced to new players as an example: Climbing. What makes this trait unique is that it, unlike most other, serves as both an offensive and a defensive feat; carnivores without Climbing can’t reach other creatures with Climbing. Given the randomness of cards dealt, putting this on a creature with valuable traits and/or a high population is rarely a bad idea. Who’s to say if another player will ever draw a Climbing card, after all?

Oh right, population. This is the green number, one with no less than two purposes: at the end of the game, it’ll add to your score, and during… it acts as the health of a creature. The other number, on the right side of each creature’s panel, is its Body Size – can’t attack anything with a Body Size bigger than your carnivore, so be sure to increase that one if you’re planning on snacking on meat instead of plants. First you’ll have to evolve though, which – like most things in Evolution: The Video Game  – is handled by way of traits; in this case, unsurprisingly, the one called Carnivore. 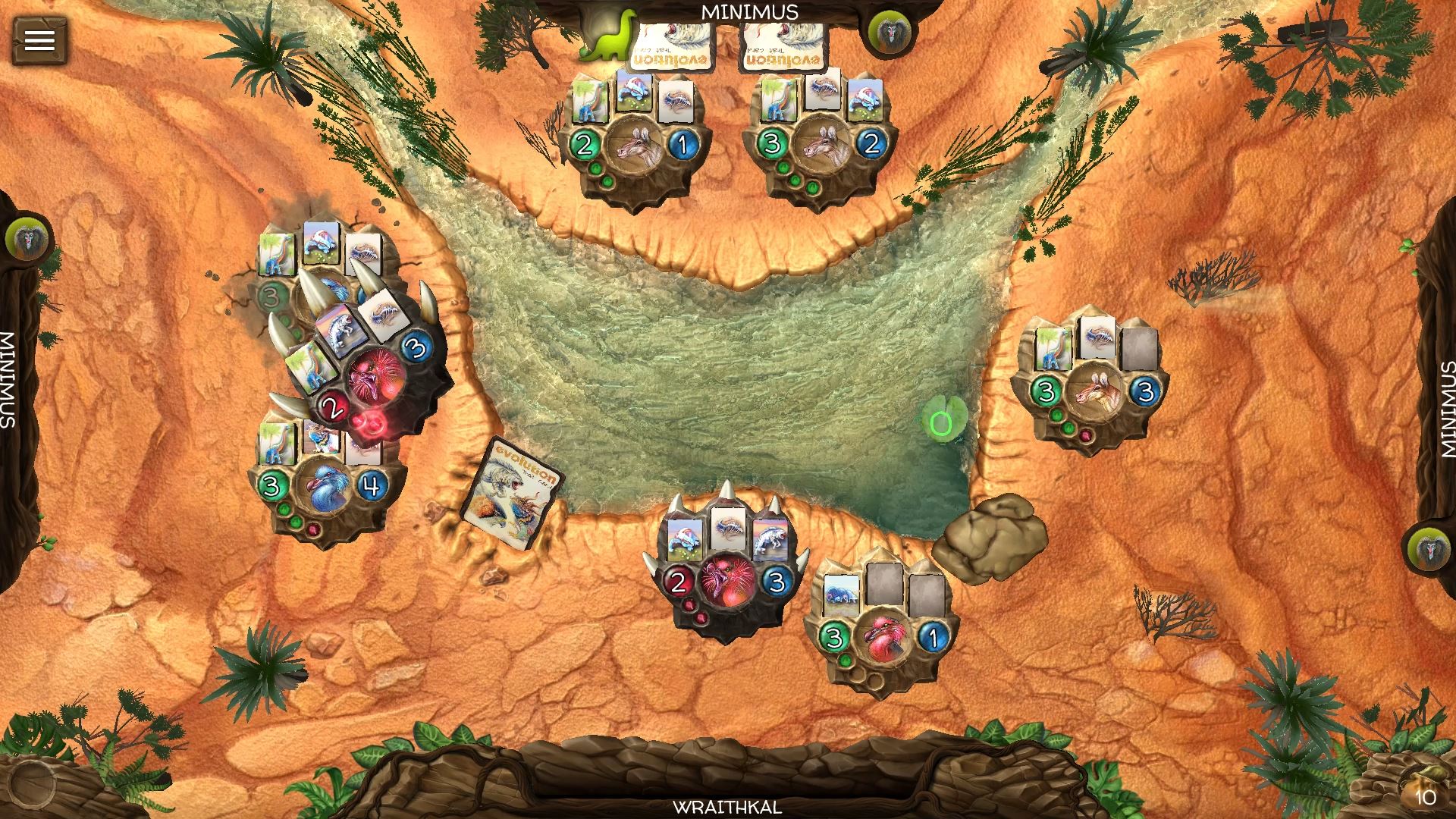 Do keep in mind, however, that while the temptation to turn meat-eater is great, there are both pros and cons to doing so, and of course, you can always turn back by overwriting the Carnivore trait during that phase of your turn. In my experience, far more traits were available for prey rather than the predator, forcing me to think twice before going down that route. I mean, the appeal of eating the population of other players’ (or your own, should it come to that) creatures is hard to resist, but at the same time, one has to weigh in that certain traits make it downright impossible to attack creatures that utilize them.

Warning Call, for example, protects creatures on each side – unless the attacker has Ambush – but not the creature with the trait itself, and then there’s Hard Shell which provides a flat Body Size boost, on top of the aforementioned Climbing. Sounds like carnivores got it pretty rough, eh? Well yes and no. Scavenger grants 1 food after every carnivore attack, and you better believe it adds up as carnivores tend to attack multiple times in a row, and then there’s the offensive defense of Horns, which will make any attacker think twice about picking that target… if they don’t fancy taking damage in the process.

Suffice to say, it is an undeniably complex game, but at the same time, in my experience, the learning curve is actually surprisingly smooth, as I never felt like the game hadn’t prepared me properly for the next encounter. Quite the knowledgeable guy, that professor fella, somehow always able to keep up with me as I went through the terrain, crossing swamp, jungle and barren mountainside alike. He’s probably also the closest thing Evolution: The Video Game gets to anything resembling a narrative, 95% of the time I spent with the game finding me in one duel or another, adding more and more mechanics as I went along. Oh right, almost forgot: I’m apparently a biologist in the game. Because that makes perfect sense? 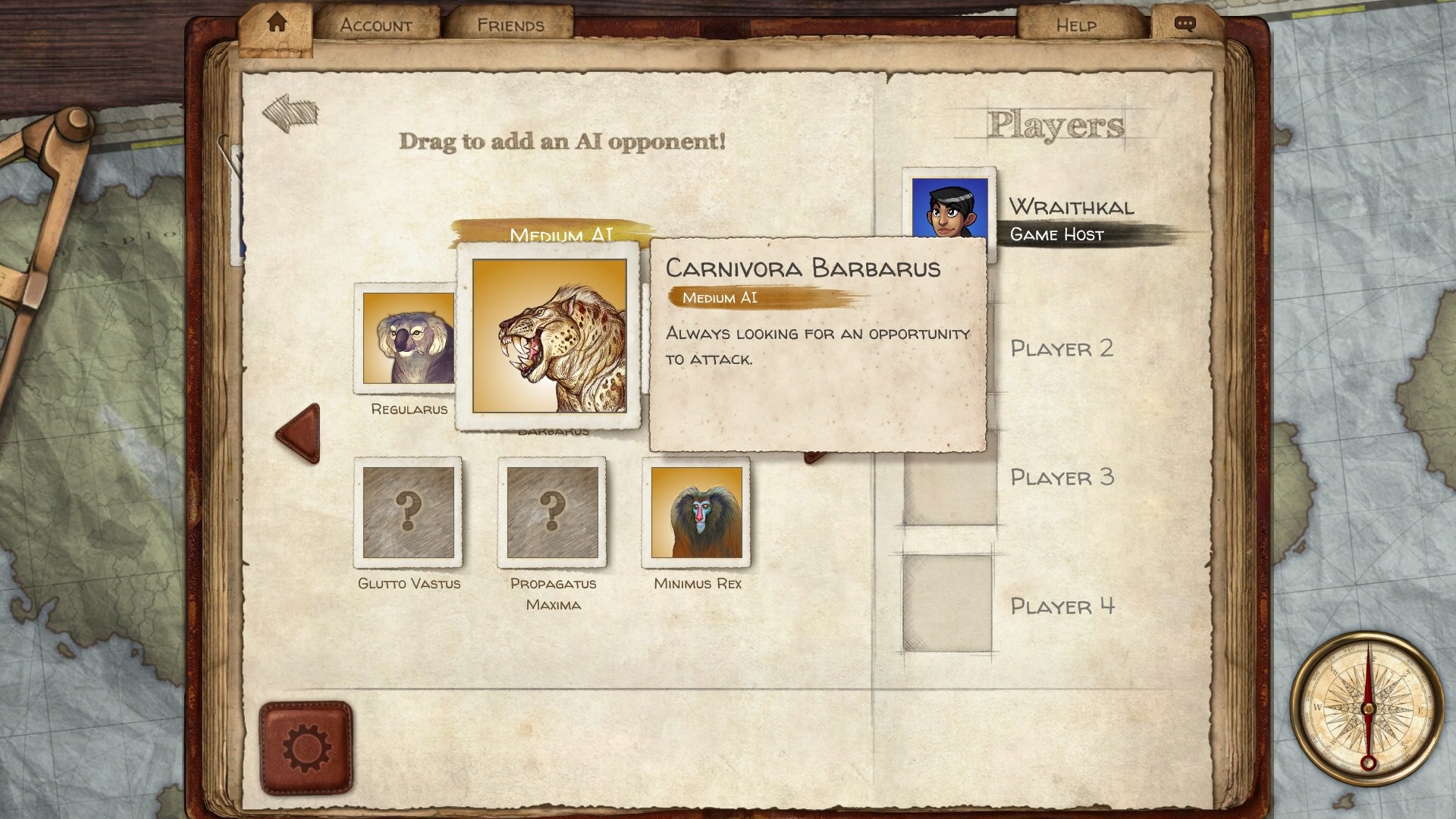 Yeah, I don’t know either. Just do as I did and pay it no mind, focusing instead on the task at hand, which is to kick you-know-what, taking  trophies for your scrapbook. One by one these mighty beasts fell, adding to my selection of AI controlled… personas. No really: boss fights, as I choose to define them, actually act as selectable characters when picking the difficulty of up to three adversaries for single player matches, each with their own unique behavior and such. Certainly gave the ‘campaign’, as it were, more meaning as then it didn’t simply serve as a lengthy tutorial, providing unlockables with genuine purpose.

That is to say, unless you fancy going online to duke it out with other people instead, which is something I was sadly unable to test for this review, seeing how the game had not yet launched at the time of writing. Seeing how it’s set to launch with cross-platform multiplayer, however, I suspect finding a match shouldn’t be overly difficult, and if all else fails, gather a group of friends with Android/iOS devices and have a go at it that way (game being ‘try before you buy’ on mobile and all). Local multiplayer hype!

All that said, in case you hadn’t already picked up on that, Evolution: The Video Game is an easy recommendation – even more so given its low price tag in comparison to the original, physical version. One can easily spend hours battling against ever-evolving (in more ways than one) AI opponents without getting even a slight sense of deja vu, given the number of possible strategies applicable within the confinements of its rules. 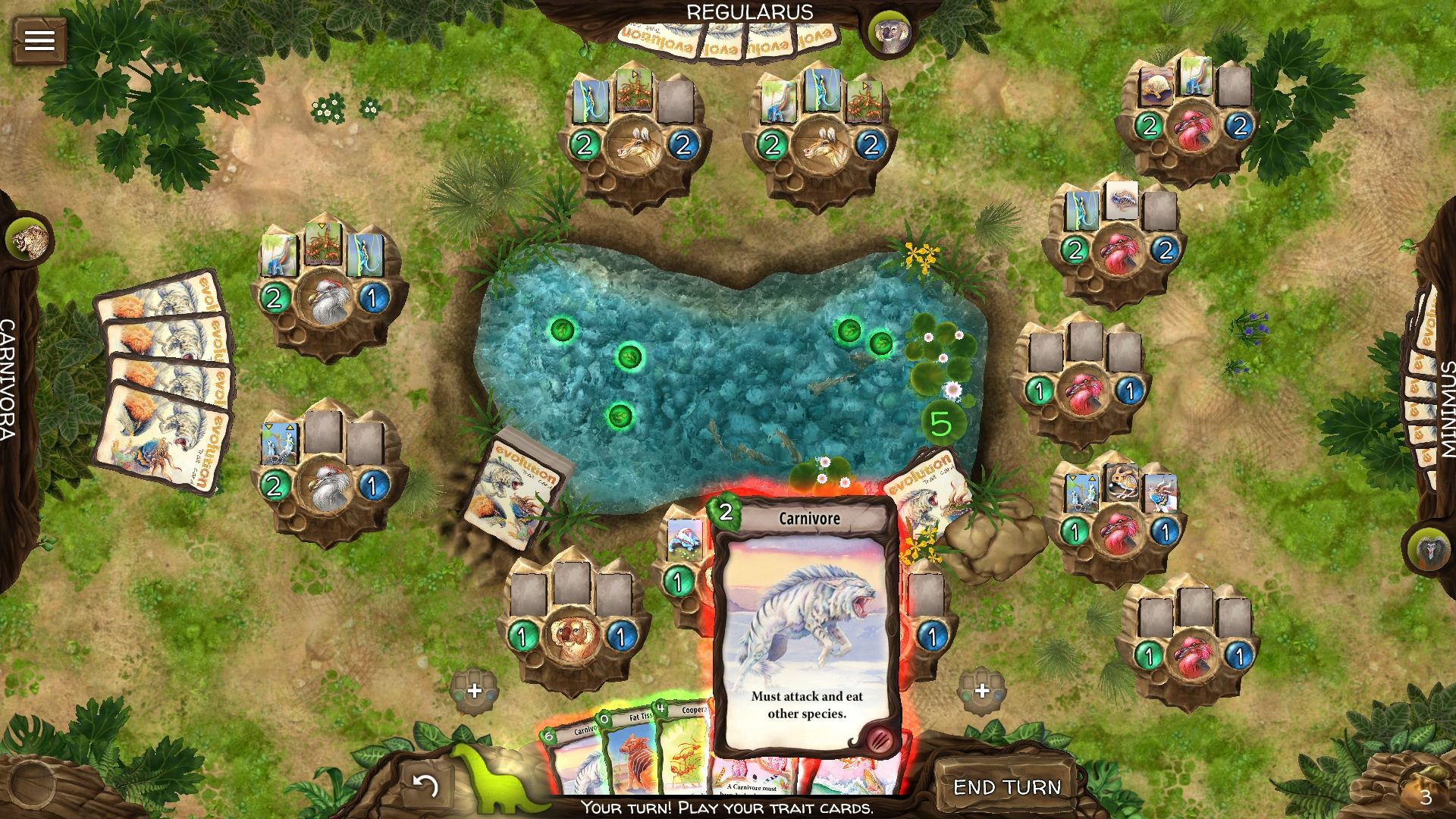 The overall experience also changes drastically depending on the number of opponents, as while more players does mean more potential targets for a carnivore… it also means more potential problems for your own creatures! Keeping an eye on one opponent is relatively easy, but when you’ve got two, or even three eye-balling your food? That’s when you-know-what is going to hit the proverbial fan. It’s also where the most fun is to be had, I’d say.

When the time comes, will you be predator or prey? Well-fed to the point of belly bursting, or go extinct because you were the only one attempting to fill the water hole, while everyone else decided to treat it as their own personal buffet? Only one way to find out.

Evolution: The Video Game is available on Steam, iTunes, and Google Play.