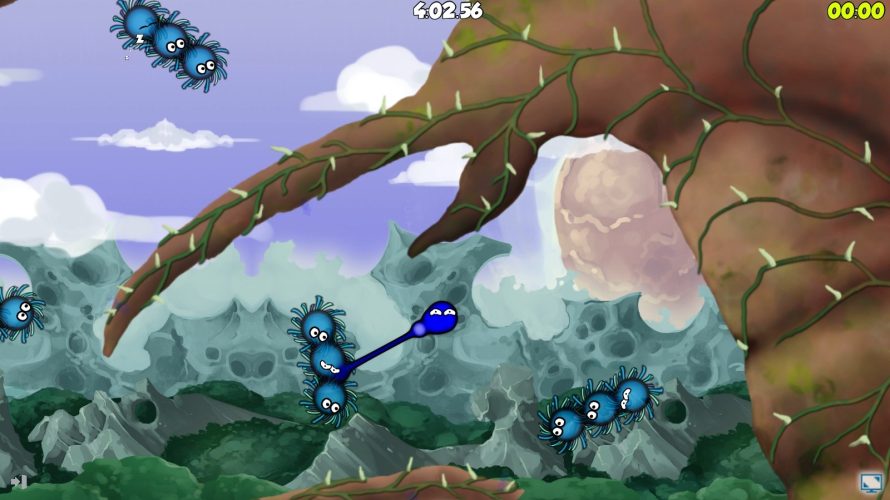 Remember the last time you got to play as a colorful gooey little character, capable of grappling onto (almost) any surface, to then slingshot ahead? Me neither, but that’s the gist of Grabbles, and it’s both a ton of fun, while at the same time providing quite a challenge; no physics-driven race is complete without hazards, after all!


For what appears to be a gelatinous blob, your character certainly knows how to swing with the best of them, courtesy of two extendable ‘grappling hooks’. Oh and guess what? Those are your only means for getting around each level. No jumping, walking or running, just grappling. Kinda like a cross between Bionic Commando and World of Goo, if that were to ever happen, only with greater control over your ‘arm(s)’.

Ain’t simply about moving around, attaching yourself to whatever’s within reach, and then using the power of momentum to progress, though. See, you’re only able to latch on to certain walls and other characters, which almost turns some areas into a puzzley experience. On top of that, you’re on the clock, as level completion rewards you with up to three stars, depending on your time. A certain amount of these will be required to access later levels, which in my opinion is a feature the game – or any game for that matter – could do without.

It provides an immersive, colorful world to explore, full of challenging environments for the casual player as well as an exhilarating and highly competitive multiplayer experience for the hard-core gamer.

Multitasking, using both hooks in rapid succession, soon becomes a necessity to avoid crashing into a barbed branch. Infinite lives and checkpoints are both present and accounted for, but… the clock’s ticking and you kinda need those stars to progress.

And then there’s the boss fight. Easily the most complex level of the entire demo, as it requires you to pull a ‘return to sender’, flinging shots fired from that huge pink punk right back at him with one hook, while latching on to something with the other. Easy? Not in the slightest, although it was interesting if a tad difficult.

The multiplayer crowd hasn’t been forgotten either, as the game features chaotic racing, both local and online (yes, even in the demo). Having multiple people on-screen at once, all trying to grab hold of something – including each other – sounds like the making of a fun party game to me. Hard to tell from the demo though, but I’m sure the full version can’t be far off. Heck, maybe even later this year? Time will tell.

Grabbles (demo) is available as a download from IndieDB, or playable in your browser. Also, Greenlight!