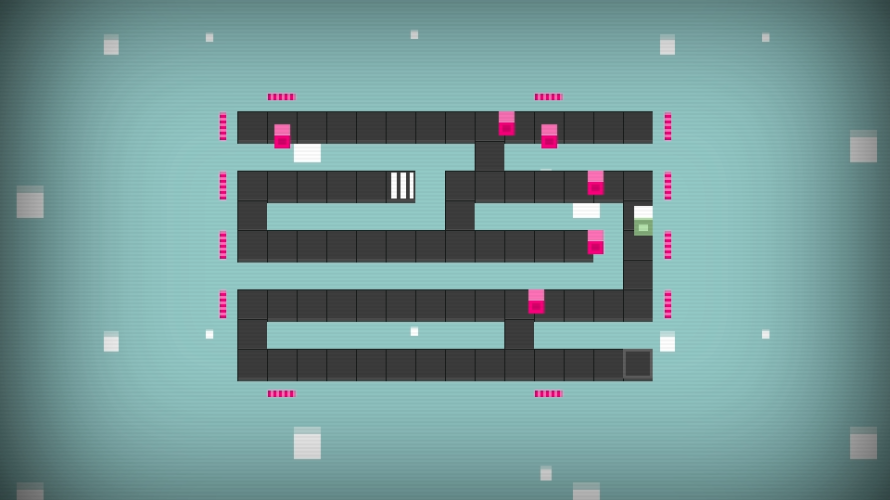 You’re green, they’re pink. Does that automatically make them evil? Not really, but in this case, everyone dressed in pink are in fact out to kill you. No really. Any contact and you’re dead. Fortunately, the suckers are only able to move between two designated points in each area, so with a bit of finesse and well-timed moves, you should have no problem getting past them… right?

Early on, sure, piece of cake. But as you progress through the 130+ levels, the difficulty does ramp up noticeably. Teleporters, maze-like designs, incredibly narrow windows of opportunity, cannons packing a seemingly infinite amount of ammo and other annoyances are all thrown into the mix, one after another. You know what they say: ain’t easy being green!

The nameless protagonist (let’s call him Mr. Green) of STOORM is blessed with an infinite number of lives though, leaving behind a ‘mark’ in the spot of every casualty; a mark of shame, if you will, for failing the challenge at hand. Seeing how each death puts you right back to square one of the current level, it really isn’t all that helpful. Not that they’re overly long, mind you, but getting through them is often akin to playing Red Light, Green Light, as you’ll spend a fair amount of time standing in a secluded spot, waiting for safe passage.

The purpose of the game is to move your cube through the rooms to finally leave the complex or… you’ll see.

Exactly what awaits Mr. Green at the end of all this, or why he’s even there in the first place, well, you’ll just have to play the game to find out! If you’re not willing to spend a few bucks without trying it first, here’s a link to the demo, which features the first twenty-four levels. A nice little sampler, as it were.

STOORM is available for Windows and Mac from Itch.io, Desura, and IndieGameStand, priced at $1.99 and without DRM.