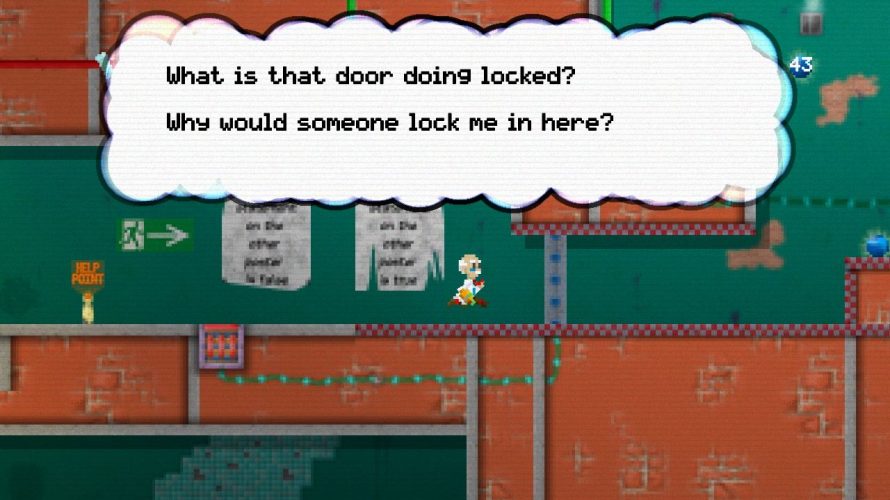 If I had a dime for every time I heard someone say “Gateways looks a lot like Portal, except it’s 2D”, I’d be rich! And while I do agree with that comparison, there is a lot more to wrap your head around (get it?) here than simple gateway (gateway, not portal) mechanics and gravity-defying stunts – this is easily one of the most complex puzzle games I’ve played in a very long time.

In Gateways you take on the role of Ed, a scientist who finds himself trapped in a laboratory where nothing is as it should be: Someone have been digging through the walls, doors are locked for no apparent reason and most importantly, someone’s stolen Ed’s gateway guns (that’s right, multiple guns)! That doesn’t mean that each is tied to a boss encounter, like in so many other games, however, because while there are in fact plenty of enemies, some good Mario-style stomping is enough to take care of them – the same can’t be said about the puzzles though.

But before we get much further into all that, there are a few things I want to make clear, the first of which is that I played version 1.09 for this review, not the initial release. What this means, among other things, is that a lot of the backtracking you had to do before has been removed, because now there are pre-placed gateways that lead back and forth between the main area and far-away parts of the laboratory. Another worthwhile addition is actually something I made the developer aware of (yay me!) on Twitter: Originally, you had to turn around to aim in the opposite direction, which was rather cumbersome. After a while, an updated demo with a fix in place was released and all was good.

Well, almost all. I have yet to finish Gateways, because some of the later puzzles drove me completely bonkers due to their high difficulty, though I’m certain it’s just me being bad at those that run on a timer. I’m not saying that the game is bad because of it, far from, but it does get quite difficult, so keep that in mind. 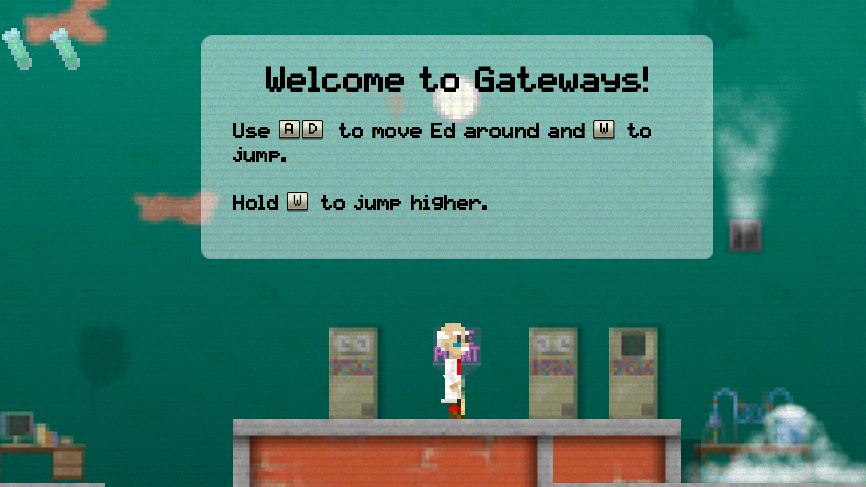 Early on however, everything’s the exact opposite with easy puzzles and on-screen tutorials that make sure you get properly introduced to everything from how to move Ed around, to some advanced gateway gun techniques. But like I said, don’t let the easy beginnings fool you, because the acquisition of each of the four guns, some of which are even upgradeable, means an increase in difficulty for future puzzles; and by the time you’ve acquired all four, chances are you’ll be in for some trial and error before you’re able to figure out just how to press all those switches at the same time, unless you’re a cloning expert.. 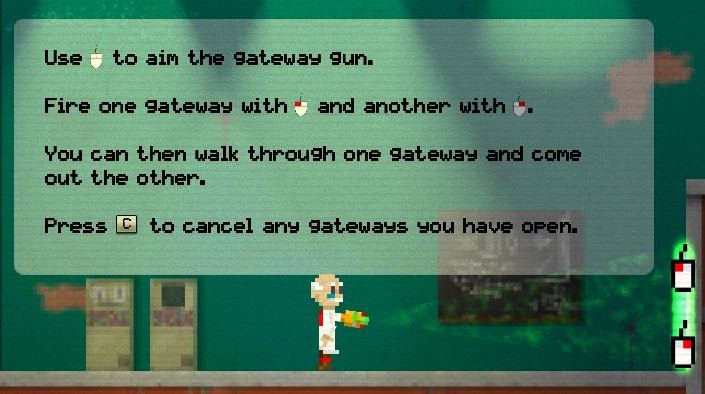 You can place gateways on almost any kind of surface, with the exception of metal and passing through a gateway barrier results in all active gateways being removed, likely to help keep each puzzle in its own secluded area. On top of that, you can only place two at a time and switching between your guns removes any you may have placed, so there’s a limit to just what kind of craziness you can pull off; don’t let that stop you from experimenting within those limitations though! 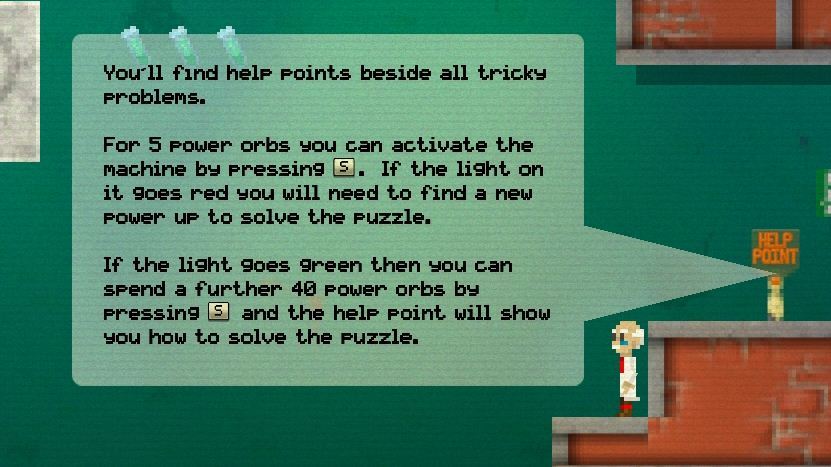 Should you get stuck, the in-game help system will more often than not be able to get you right back on track; if you’ve got enough of those blue orbs in your possession, that is. This also makes it easy to figure out whether the puzzle you’re facing is solvable with your current equipment, or if you need to come back later. Keep in mind that there are only so many orbs in the game however, and since there’s no way to know when you may want to spend some on a particular puzzle, chances are it’ll be worth the extra effort to grab ’em all.

If you’re not a fan of a pixellated art style, chances are you won’t like what you see in Gateways either, but it does seem appropriate for this particular game (and now I’m wondering just how it would look with higher resolution textures/a different art style – doubt we’ll ever find out). Oh and the plot? Who said anything about that? This is a puzzle game, not – oh right, Gateways does actually have a story to it, even though most of it is delivered through Ed pausing the game when he wants to share his thoughts on the current situation. But does it really need a complex plot, full of cinematic cut-scenes and stuff blowing up left and right, in order to be enjoyable? Not really.. 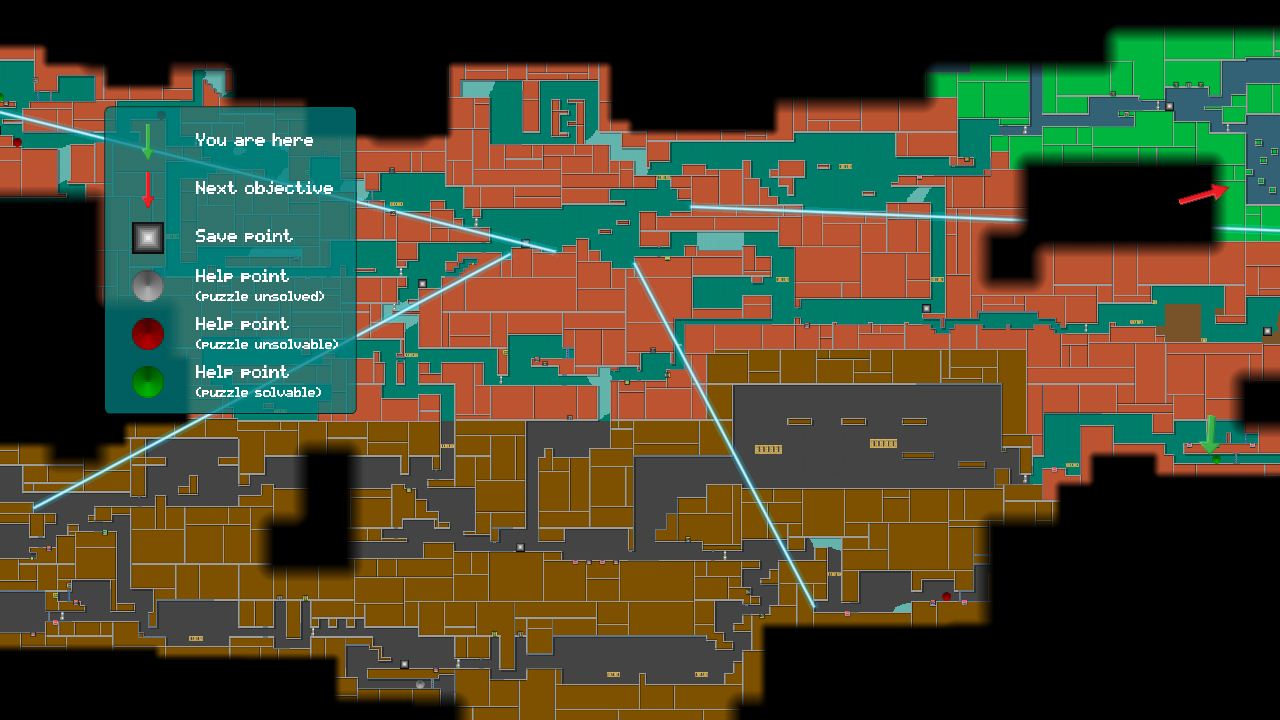 Since the lab is a big place with lots of maze-like corridors, it’s fortunate that an in-game map is available at the press of a key, from which you can easily figure out where to go next and what you have yet to explore. This is a very useful feature, since you’ll be doing a lot of running from place to place, shooting gateways on walls and ceilings while pulling off all kind of crazy stunts. Just make sure you watch your remaining lives while you’re busy defying the laws of physics, because old Ed is somewhat fragile and even though checkpoints are not exactly a rare sight, dying does still suck.

In good and bad, I’d say that Gateways is an overall impressive game with lots to do and puzzles that’ll likely make your head spin, but also make you cheer out loud upon figuring out the solution (and even more so after pulling it off). The pixel art style combined with 2D Metroidvania exploration helps give the whole thing a retro feeling, even if the background music is not exactly old-school style. Overly complex puzzles or not, the shere scope and creativity behind what I experienced during my time as Ed the scientist impressed me.

The developer of Gateways, Smudged Cat Games, can be found here as well as on Twitter and Facebook. Interested in buying it? Here are your options: From the developer ($5 DRM-free with optional Steam key), Steam ($5), Desura ($5) and XBLIG ($3).