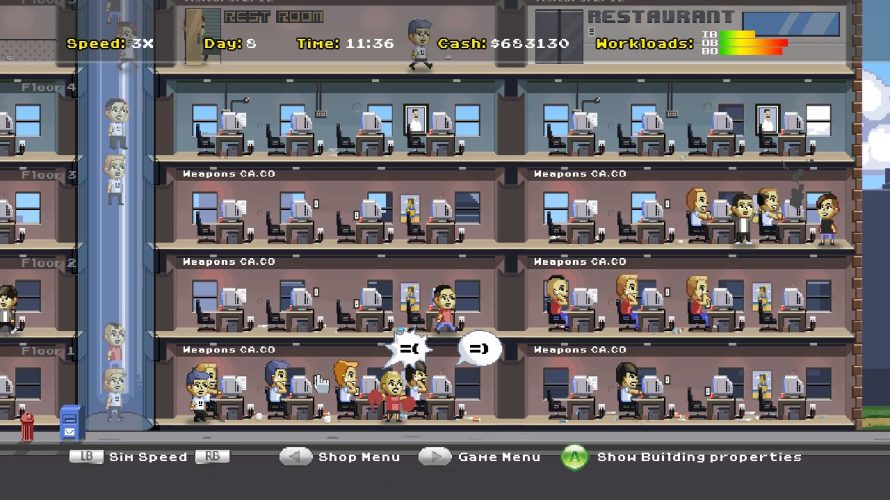 Running a cell center is far from a stress-free task, with plenty of chaos, people getting pissed at each other, plenty of firing, hiring and much more on a daily basis, but at the same time there’s a lot of fun to be had in Smooth Operators: Call Center Chaos from Heydeck Games.

The SimTower inspiration is not hard to spot, but where that game focused on building what was essentially a skyscraper, Smooth Operators instead tasks you with running a call center, and there is definitely plenty to keep you busy here. But before you get to watch the money roll in and have to deal with upset workers, you have to design and construct the building, which means placing everything from offices to bathrooms and a cafeteria, so your poor underpaid workers have a place to eat during lunch-hour.

Once that’s taken care of, and enough staff has been hired, it’s time to start micro-managing the whole thing, including ensuring a stable working environment, because an unhappy employee is likely going to be rather inefficient and that means less money made! Speaking of money, you also have to develop contracts with clients to make sure your business is providing a steady income, or.. well, we all know what happens when a company goes broke.

In case it all sounds a bit overwhelming, don’t fret because a tutorial helps you with the basics upon starting a new game, but after that it’s all up to you. If you’re not the patient type (like me), being able to speed up the game during the slower days is a very welcome addition, and when the opposite is the case, you can simply pause it all and take your time dealing with whatever crisis has emerged. Thanks to that, it’s definitely much less of a hassle to run a virtual call center instead of the real deal, but that has one major downside: Any money made is also virtual.. Can’t have everything I guess!

Heydeck Games can be found here and on Twitter. It’s available on XBLIG for $1 (80 MS points). Oh and the developer is trying his luck on Greenlight, so do hit that with some feedback.