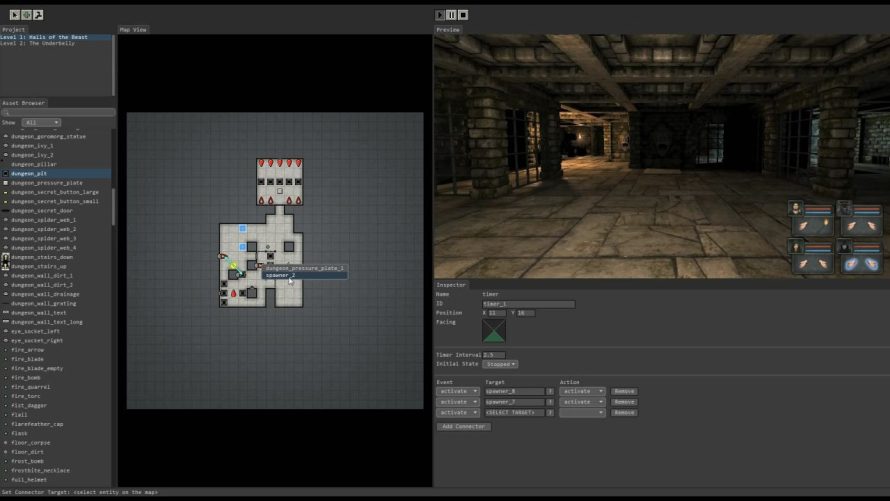 After several sneak peaks, previews, trailers and a closed beta test, a public beta of Legend of Grimrock‘s dungeon editor is finally upon us, which means they need your help testing and getting it ready for launch!

There is however one minor detail that’s already rubbing people the wrong way in the comments section of the announcement: Your copy Legend of Grimrock needs to be on Steam, so those who purchased it on GOGare.. well, out of luck. According to the developer, Almost Human Ltd., the reason for this is that Steam’s automatic update system makes it easy and quick to patch issues that may arise during the testing period. But once the beta has concluded, the editor will be made available to non-Steam users as well, although the recent announcement of Steam Workshop integration does make owning it on Steam worthwhile, if you plan on using/creating community-made content.

On a related note, the Grimrock Nexus has been launched, and I’m sure plenty of content made by the fans will be uploaded to that place too, so hopefully Steam Workshop won’t be the only place where one might find a custom level or two; who knows, I just might create something for the game too and put it up there myself!

To join the beta right-click on Legend of Grimrock in your Library of games in Steam and select Properties. In the Betas tab opt into the beta using the dropdown there. The Steam Client should then automatically download the beta.

Simple enough, but how can you help if you don’t have the game on Steam? In several ways actually, since they’re looking for some feedback on the documentation, and if you feel like flexing your creative muscles, the model and animation exporters could use some tuning as well. Or how about thoughts and ideas for the scripting interface? Even if it’s not going to be as much fun as testing the actual editor, feedback on those things are just as important for getting this beast of a modding tool ready.

There’s also a brand new modding forum and trailer (below) to go with the beta launch, and if you haven’t bought the game yet, the official website has a list of places that sell it.